Whether you live on the internet or under a rock, you’ve probably heard of Jade Rasif. The resident DJ of Get Juiced is known as the queen of unfiltered tales, as she shares most of her life on Millennials of Singapore’s YouTube channel.

Since we last caught up with Jade in January, we’ve learnt how she got her ex-boyfriend fired after they broke up over chicken drumsticks as well as her personal stance regarding Monica Baey’s sexual harassment case.

This time, we invited Jade down to our office to recreate her clubbing makeup look on camera. While we were at it, we pried into her personal life to find out more on her career as a DJ, rabak things that have happened while she was spinning and flirting tips she has to offer.

What are your favourite clubs?

I spin most frequently at Get Juiced, [it’s] my resident club. But my favourite club to party at is hands down Marquee.

What’s the most rabak thing that has happened while you were DJ-ing?

So, after I finished DJ-ing, there was this girl, and she was the resident DJ of a club. As I was walking away from the console—’cause she was really rude, she had slammed my laptop down and everything—I turned around and gave her the finger. She took my hair, pulled me down and slammed me straight on the floor, with my bag and my heels.

And then, I called the police. You should have read the police report. “Resident DJ of club said that I had big breasts, she posted this on Twitter. That night when I went to DJ with her, she pulled my hair, slammed me on the table and called me a ‘Thai plastic bag’.”

Who was the last person you drunk texted?

The most recent person I drunk texted was myself. I texted, “Where are you?” and then I replied, “I’m home.” When I saw it the next morning, I was like, “Oh no.” 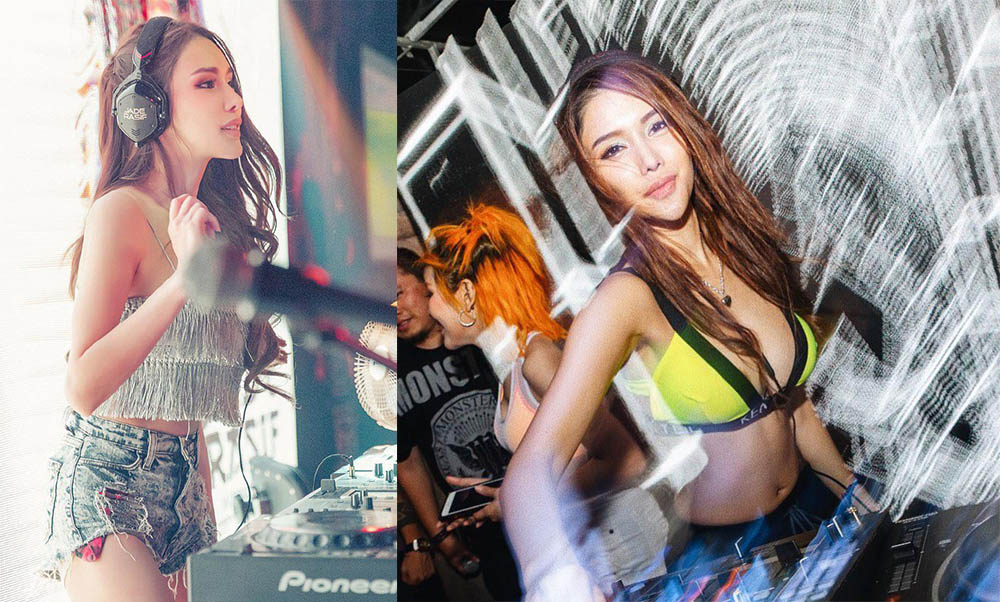 What’s the weirdest message someone has slid into your DMs?

The nice thing about Real Talk is that we’ve been friends for such a long time. We actually have this group chat and it contains all the weirdest things I’ve ever been DM-ed.

Recently, I screenshot a new one for the group chat. It was this guy who messaged me and was like, “Let’s have sex in [sic] rainforest.” And I was like, “Wow… amazing.”

Ugh… I’ve heard a lot of bad ones. I feel like there’s just a universal standard of bad pick-up lines. They’re all just bad, it plateaus on a level of bad. Personally, I like it when a guy’s just honest and is like, “Hi, how are you?” and I’ll be like, “I’m fine,” and the conversation can start from there.

If you’re a guy and you don’t know how to continue the conversation, maybe you can say, “Ugh, been working the whole day, earning all these stacks of cash. Do you know where the car park is? Can’t find my Lamborghini.”

Do you have any flirting tips?

If you want a guy to talk to you, try this trick that I use. Do your makeup just a little bit ‘off’, you know, like a little black smudge or something. Then you can be like, “Oh, uh, how’s my makeup?” They have to help you fix it, in which case they have to touch your face.

That will be a conversation starter if you want to get a guy to talk to you. And it kind of tells you which guys are honest. If they’re totally dishonest and are like, “Oh, your makeup’s fine,” then you know they’re liars.

I would rate myself a 10. I really love getting my face ready, and I love beauty. As in, I don’t stare at myself like, “Wow, she’s gorgeous.” But I love beautiful girls. I’ll go on Instagram and I’ll perv all over Saffron. I’ll be like, “Ughhh, Saffron you’re so pretty.”

I like beautiful things, looking at beautiful things. I like looking at makeup that’s done well. Other people’s, not mine. I like thinking I reach some close approximation. I like Narelle Kheng’s face, it’s very beautiful. Mirchelley does such beautiful makeup.

What is your approach to makeup?

Every girl has a different sort of goal with their makeup. For me personally, I use makeup because when I put on makeup in the morning, it’s like my “me time”. I have scented candles in my bathroom. I have music. I watch a video. And then I get my makeup done. I really don’t like doing makeup if I have to rush it, but you know, sometimes I have no choice. When did you start getting into makeup?

I started wearing makeup in secondary school and we weren’t allowed to wear makeup to school. I used to do it anyway, but I had to make it look really natural because I had to sneak it past the teachers. Whenever they found out, I would be so embarrassed because they would call me out: “Jade, are you wearing makeup?” “Yes, sorry cher, I hao lian (‘show-off’ in Hokkien).”

How did you learn to become more daring in such a conservative society?

When I was growing up, I didn’t go to a local secondary school. I was in an international school, so everybody there was kind of like me. Then when I went to university, I realised that people were a lot more conservative, and the things that I was saying were actually a little bit shocking. Pleasantly surprising to distasteful, anywhere along that scale.

I never really realised how candid I was being. Since then, I’ve learnt to tone it down and sort of watch what I say, but people still say I’m pretty candid. I’m trying not to be as much, for the sake of public decency.

Jade Rasif On Beauty And Her Career

How To Pick Up Girls: Foolproof Guide For Humji Singaporean Guys