Disclaimer: All opinions in the article are the writer’s own. ZULA is in no way encouraging girls to sell used panties online.

*Names were changed to protect identities.

Shortly after graduating from University, I found myself staring at a near-empty bank account. I was job hunting then and needed some cash to tide me over those few months.

It’s not that I hadn’t considered part-time jobs. Call me spoiled, but the thought of folding clothes or scooping ice-cream for less than S$10 an hour didn’t cut it for me.

So, I started looking for other options that would pay more in a shorter time.

How I sold my used panties

The idea of selling my used panties online to Singaporean men actually came from my boyfriend.

He joked it was much easier for girls to earn a living because they could be a sugar baby or sell their worn intimates. He never expected I would start selling my panties for real.

Initially, he was upset and wanted to stop me by being my only customer. “I will buy all your panties!” he told me in frustration. But eventually came round when he realised it was my prerogative.

After doing some research, I realised there were two ways I could go about selling my underwear. The first was through Tumblr; the preferred method of most established local panty sellers because of the site’s thriving fetish community.

I soon realised these girls had a real business going. Their Tumblrs were incredibly well-curated, with pictures of their products alongside seductive pictures of themselves. They also regularly engaged their fanbase, teasing them with risqué GIFs over time.

I really admired the effort they put in, but I wasn’t ready for that level of interaction with people who were going to be sniffing at my underwear.

The other method, which I eventually opted for, was to post ads on Locanto and Craigslist. While this method was much less labour intensive, competition was stiffer (pun intended). Some girls were selling worn pieces for as low as S$5 each.

Undeterred, I went about crafting my ad. I snapped photos of the pieces I wanted to sell and included a comprehensive FAQ of my prices and rules. “NO MEETUPS” was high on the list.

With a click of a button, my ad went live.

Soon, the enquiries rolled in. What I didn’t expect was how stupid some of the questions were:

“Why cannot meet up?”

“What’s your weight? Your hand look fat in the photo”

“Why need to pay you before get the item?”

And last but not least, the classic:

Really, they weren’t that different from people I had sold things to on Carousell. It was like someone had scraped the bottom of the ‘Carouhell’ barrel and sent the worst customers to me.

My hope was dwindling of ever making a successful sale until Bernard* contacted me. 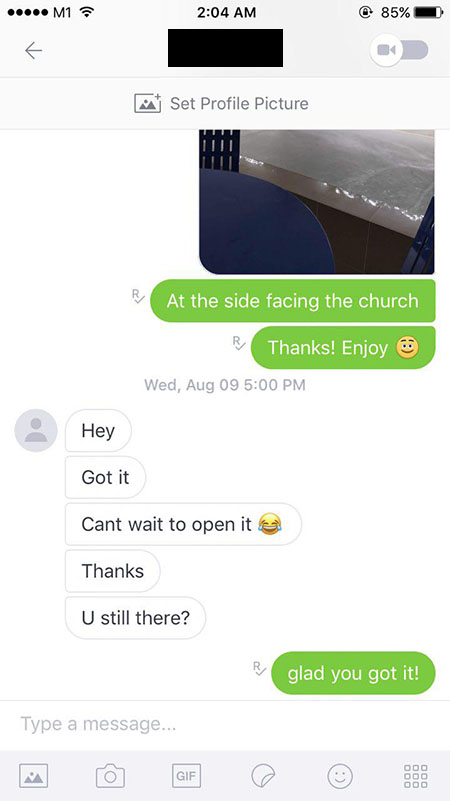 My conversation with Bernard*

He asked for the cotton pair I had worn to bed the night before to be placed in a bag and dropped off at a discreet location, where he would ‘self-collect’.

Even though I would have preferred to mail it to him or place it at a POP station, I acquiesced because he was polite and agreeable to my asking price of S$40.

After receiving the money, I dropped off my panties at a nearby void deck and informed him of where I’d placed it. I don’t know if he saw me there, but I guess some things are best left unexplored.

Just when I thought the transaction had ended, Bernard messaged me and asked for a countdown.

“What’s a countdown?” I innocently texted my boyfriend, who had by then made his peace I was really selling my used underwear.

“It means he wants you to count down while he wanks.”

By the time I replied Bernard to politely decline, he had told me to ignore his previous message. I guess he finished off on his own. 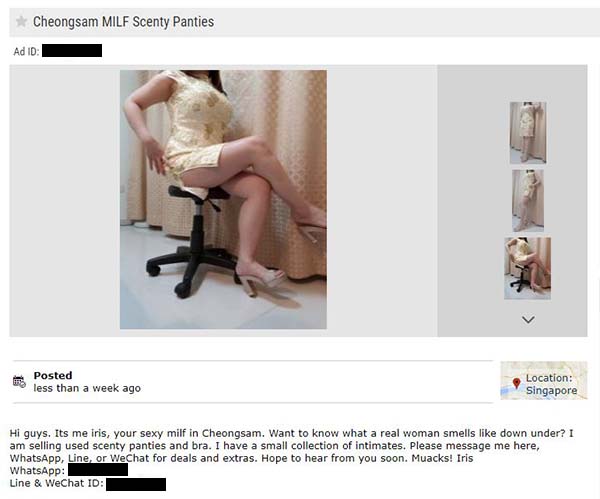 MILFs are also on the site.

Why I Stopped Selling My Used Panties

After a month, I changed my mind about my ‘online business’.

While I don’t judge people who get off by sniffing a girl’s worn underwear, most of the guys I spoke to were poor specimens of the male population.

Barring Bernard, those I’d encountered were rude, unreasonable, and dense. In order to maintain my patience, I often told myself they were uncles who didn’t know how to type properly.

I also gained a newfound respect for the girls who have been doing this for a long time. My one-off encounter was more trouble than it was worth. At the end of the day, it was just another job that had its own pros and cons.

Here’s some advice to girls wanting to go down the path I did: don’t. If you’re really in need of money teaching tuition will probably earn you the same amount of money as selling used panties.

But if you really want to, go ahead, but protect your privacy at all costs and don’t ever let anybody coax you into providing services you’re not comfortable with.

Writer's identity has been withheld by request.