Going On A Solo Backpacking Trip

Whenever someone finds out that I took a gap year between JC and university, their first reaction is a look of “Ah, you are one of those,” followed by an obligatory inquiry into how I spent it. The conversation changer often happens when I mention that I went on a solo backpacking trip to Israel and Palestine.

Determined to debunk as many social stereotypes as I could and afraid that I would laze the year away, I set out on my first solo backpacking trip in June 2017. Unwise as it might have been, the destination was decided at random. I had heard many contrasting accounts of Israel and Palestine but didn’t know what it was really like. And as a nerd for anything related to history, politics and religion, the region also stood out as a destination.

With my new 40L Quechua backpack and savings accumulated from three months of working two part-time jobs, I flew to Tel Aviv for four weeks of exploring, volunteering and learning. 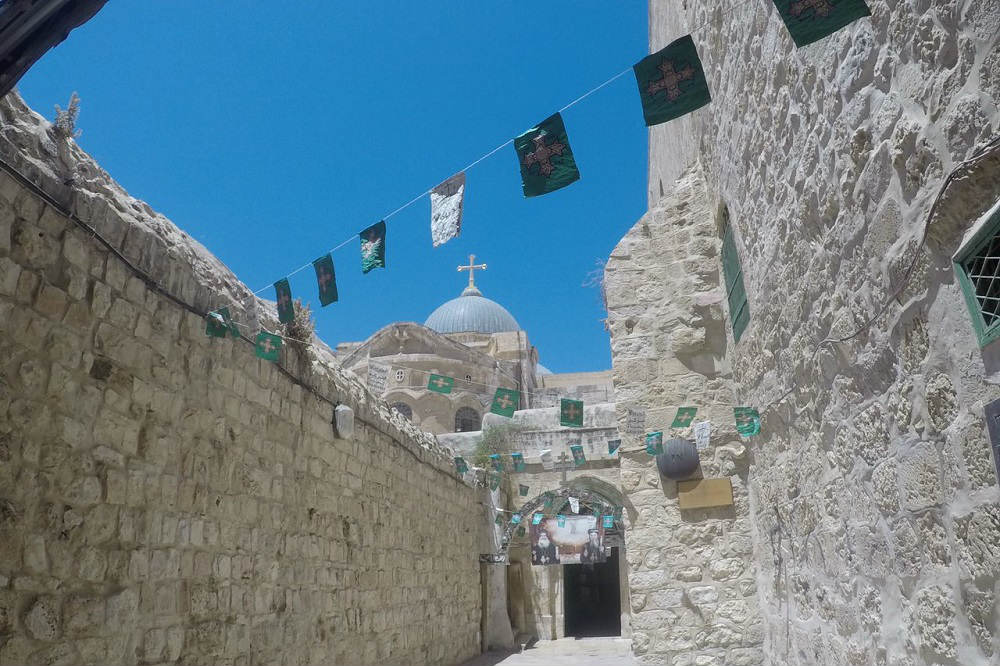 A 20-hour journey with a stopover at London brought me to Ben Gurion Airport in Tel Aviv. Far from my expectations of a dimly lit rinky dink, the airport was bustling and modern. This surprise was accompanied by a sense of shame—my first 10 minutes in the country had already showed me how ignorant I was.

The first day taught me a lesson that has since been deeply ingrained throughout my future trips: No matter what time you arrive at your accommodation, always leave the first day free. From underestimating the time needed to rest to spending too much time coming to terms with my new environment, I didn’t even make it out of my hostel to get food the first night.

My next four days were spent weaving through the Old City, visiting famous sights such as the Wailing Wall and Mount of Olives. Certain I would not recognise the significance of these sites, I had started reading books about the region weeks before the trip. That is one of the most important things I would recommend all backpackers to do. Simon Sebag Montefiore’s Jerusalem: The Biography was the most clunky, but also most helpful thing that I had in my backpack.

Though there was no lack of cafes and restaurants catered to tourists, the idea of dining solo was awkward at the beginning. Most of my meals were settled by munching on simple fare from passing food rickshaws. For less than 10 ILS (~S$3.80), you’d have more than enough to fill your tummy! 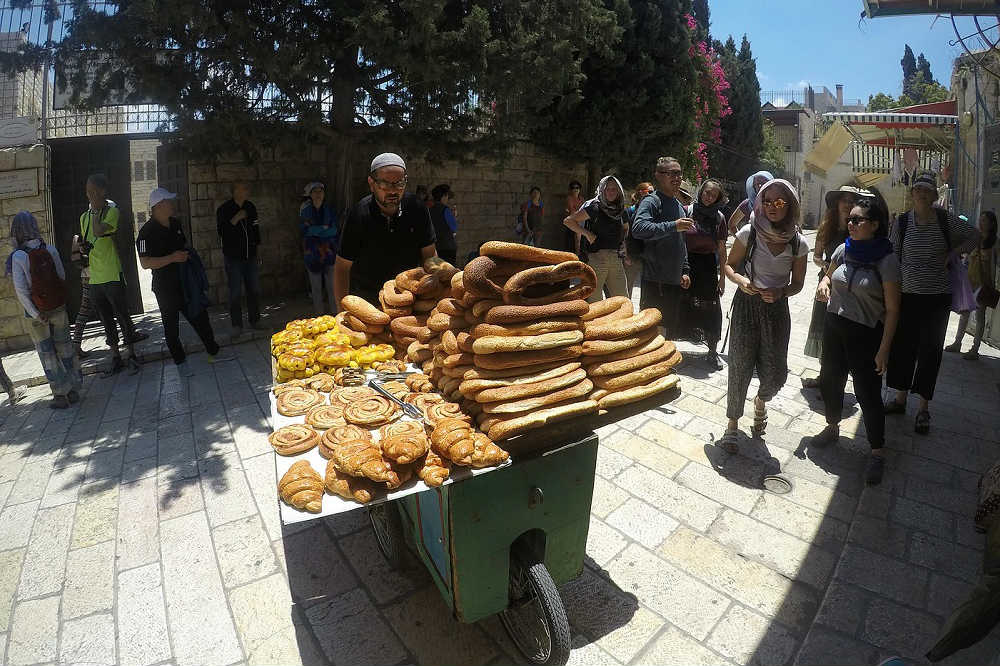 Starting the trip at Jerusalem, the centre of much political and religious clashes, was overwhelming and petrifying for a 19-year-old girl. From having a soldier casually armed with a rifle sit next to me on the public bus, to receiving indiscernible stares for being the lone Chinese girl in the crowd, every moment had me on my toes. Nonetheless, I left Jerusalem in one piece.

Part 2: Volunteering with a Palestinian family 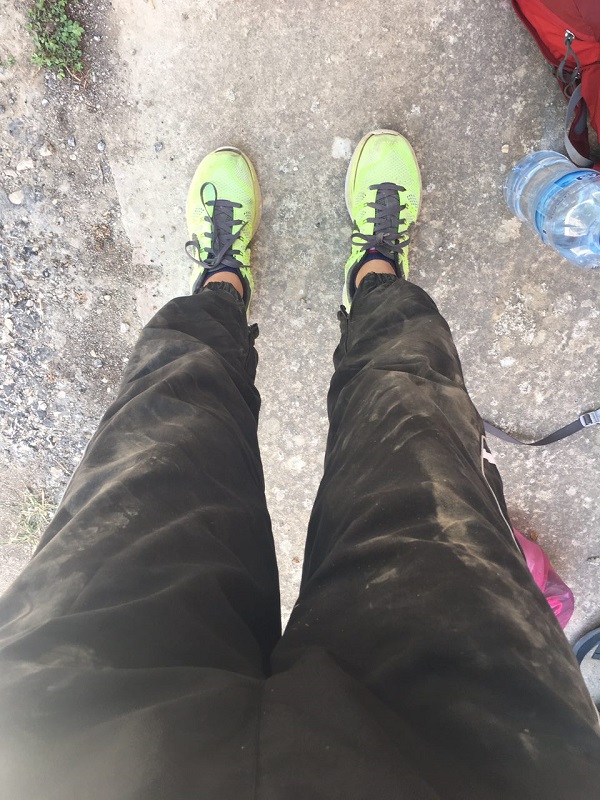 As the main aim of my trip was to see how true the stereotypes surrounding Palestinians and Israelis are, I thought the best way to hear from them personally was by staying and working with them.

I spent the next week volunteering at Tent of Nations (ToN), a farm owned by a Palestinian family located at West Bank, less than 20km away from Jerusalem. Offering roles ranging from construction to housekeeping and farming, the farm lets you spend a fixed number of hours working in return for three meals a day and accomodation.

For a week, I rose at 6am with other volunteers to head for breakfast, then to rebuild the destructed vineyard, share stories with the Palestinian family in the evening and gather with other volunteers around a campfire before heading to bed. With limited water supply, we retired to our bed without showering for all seven days, but personal welfare was often the last thing on our minds. Almost every night, I had the opportunity to speak with volunteers from all backgrounds—students on gap years, Jews who wanted to support peace in their country, people of faith who had travelled all the way to reach out, and more. Every day was a repetition of the previous day but never the same in what I took away.

I Solo Backpacked In South America for 8.5 Months And Crossed Borders Illegally

Part 3: Chasing the sunrise and the Dead Sea at Arad 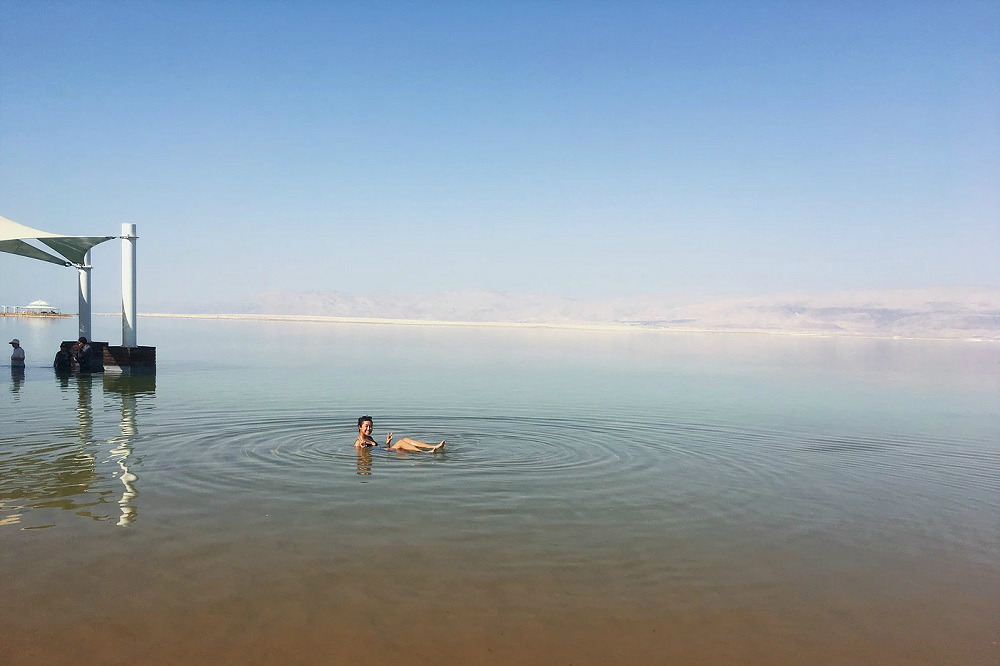 After the end of the work week at ToN, I left the farm on a self-declared RnR break to Arad, a little Jewish town near the Dead Sea.

Succumbing to the ‘must-see’ and ‘must-visit’ claims on travel websites, I splurged on the next day’s activity. For US$50 (~S$68), a few backpackers and I took a ride from the hostel to Masada to catch the sunrise. We ran up the sandy path for an hour, reaching the peak of the ancient fortification just in time to watch the sunrise over the Dead Sea. The sense of awe and rejuvenation was worth every minute of sacrificed sleep. 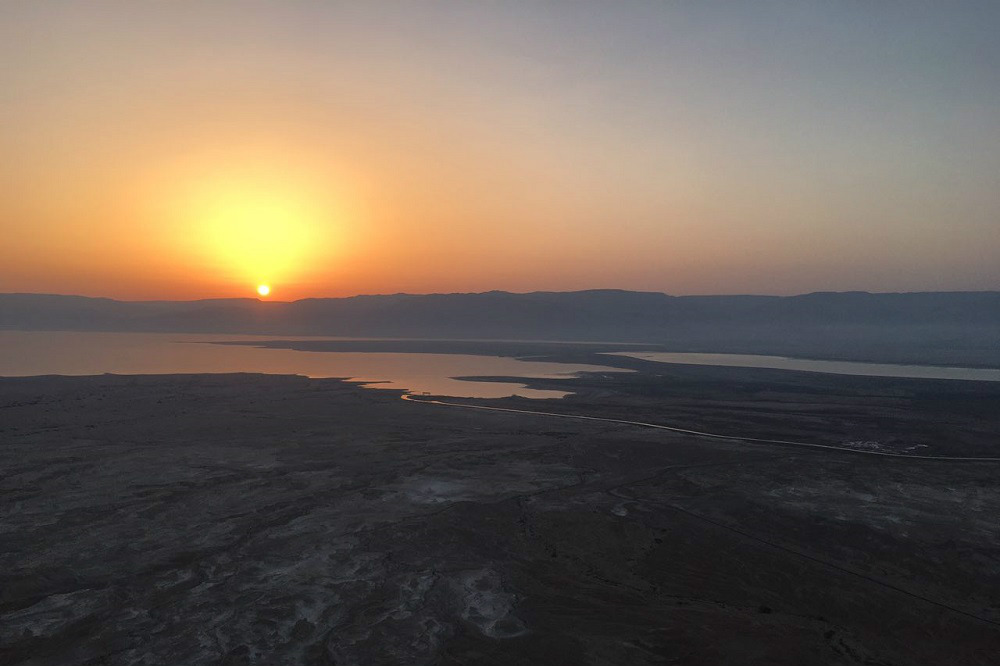 My third day was spent doing what everyone does when in Israel or Jordan—visit the Dead Sea. There’s no lack of day tours that provide pick-ups from almost any hostel to the beach. The most budget-friendly way, however, is to head there yourself. For less than 20 ILS (~S$7.40), I took two buses that brought me to Ein Bokek Beach, a beach that was free to enter. The entrance fee for many dead sea beaches can go up to US$80 (~S$108).

The Dead Sea was much as I had expected—clear waters on one half, white sand on another, and small pools of mud spaced far from each other. What I was not prepared for was the heat. While I had gotten used to Israel’s mercilessly sunny summer, the temperature and humidity spiked toward the tip of the country. My five hours there were spent lying in the sun, jumping into the sea, and washing myself off at the common showers when the sea water stung too much. My first dip was pure fun and excitement as I marvelled at how the water swept my legs up to keep me afloat. A word of advice: Do not dunk your head into the water. I did, and spent the next 30 minutes trying to overcome the burning sensation in my eyes.

With the money spent at Arad, I had to tighten my food spending to stay within budget. By going on an extreme meal prep of bread, tomatoes, cucumbers and hummus, my food expenditure only set me back by about 10 ILS (~S$3.80) for three days. Having bread and vegetables for every meal wasn’t as much of a pain as it sounds, but full disclosure: the hostel had free-flow Nutella pancakes every morning, which saved the day! 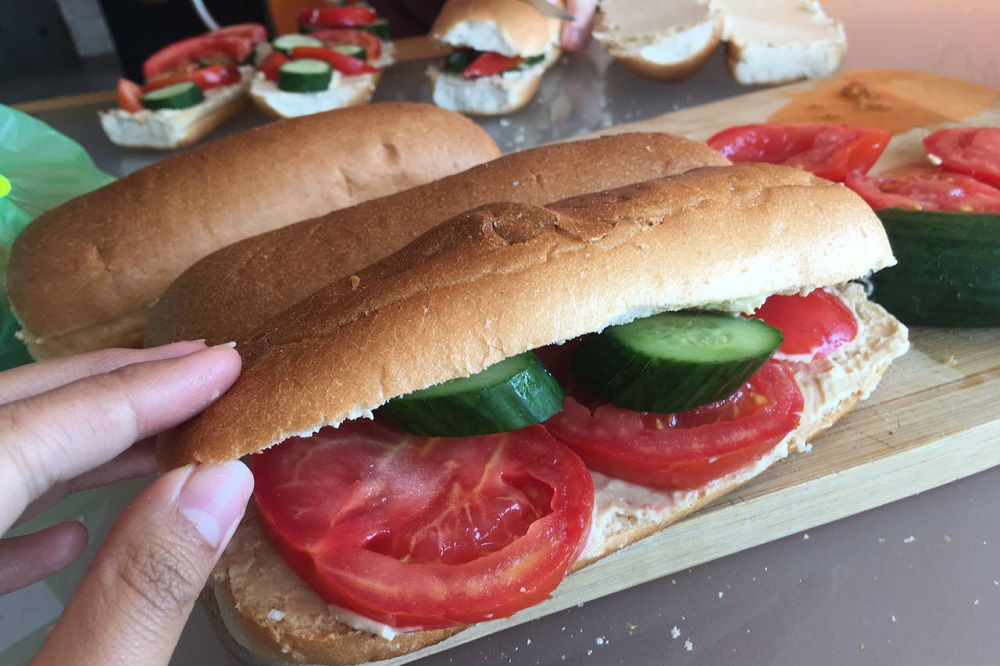 Lunch and dinner for three days at Arad

Part 4: Spending a week at the West Bank

Things took a much more sobering and serious turn as I continued exploring the rest of the West Bank. As a place that was even less frequented by foreigners, the fear, awkwardness and anxiety of the first days quickly crept back. In the week that I was there, I saw fewer than 10 women on the streets. Stares were a lot more intense and came with curious remarks and questions, with one of the most ‘memorable’ incidents being a group of boys driving by while catcalling and shouting, “You China girl, come my house and kung fu!”

While racism and catcalls were not foreign concepts to me, that was the first time I experienced both in such a direct and personal manner. At that moment, I remember being paralysed with a mix of emotions—fear, humiliation, anger and confusion. I was not explicitly threatened by the remarks but they threw me off and were akin to a slap in the face, reminding me of how much I stuck out like a sore thumb. 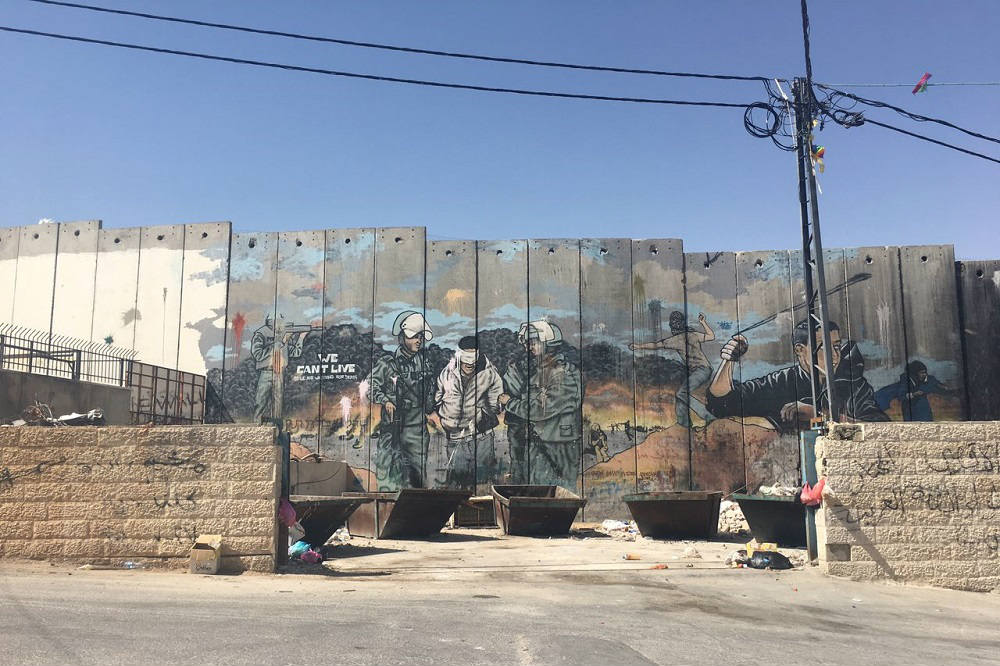 Murals illustrating the conflict between Israelis and Palestinians

One of the most distinct features of my time at the West Bank was how the atmosphere shifted quickly and drastically between nearby areas. The three main areas I visited were Aida refugee camp, Ramallah and Bethlehem. The mood at the refugee camp was tense and the place was filled with murals speaking of the pain and hatred of war. Ramallah, the capital of Palestine, was lively and crowded, with kids shouting “Marhabaa!” (“Hello” in Arabic) every time they saw me. In Bethlehem, the relatively quiet town only came alive at certain spots where tourist groups poured in and out of famous sites such as the Church of the Nativity.

Part 5: Hitchhiking back to Tel Aviv

On top of the activities described above, a portion of my time on the trip was also spent dealing with the aftereffects of being pickpocketed. Twice. Heeding my mother’s advice to separate my money into small pools turned out to be wise. After recovering from the paranoia and frustration of losing two weeks’ worth of travel expenses, I adjusted my plans for the final leg. I had to give up visiting the desert in Jericho and headed straight to Tel Aviv, where the airport is, to avoid the possibility of not being able to make it onto the flight home.

With barely enough left to spend on food in Tel Aviv, desperation drove me to a new level of intrepidity. The recommended way to get to Tel Aviv is to make several transfers on the public bus. Another option is to hitchhike 75km for free. With a fellow backpacker I met along the way, I hopped into a car driven by two young men who dropped us off on a highway about 10km from our starting point. After a two-hour wait, we got onto a delivery truck that brought us closer to Tel Aviv, before hitching another ride that brought us into the city. This six-hour journey was the most dangerous and spontaneous activity I have ever done and till today, I can only be thankful for making it back unscathed. 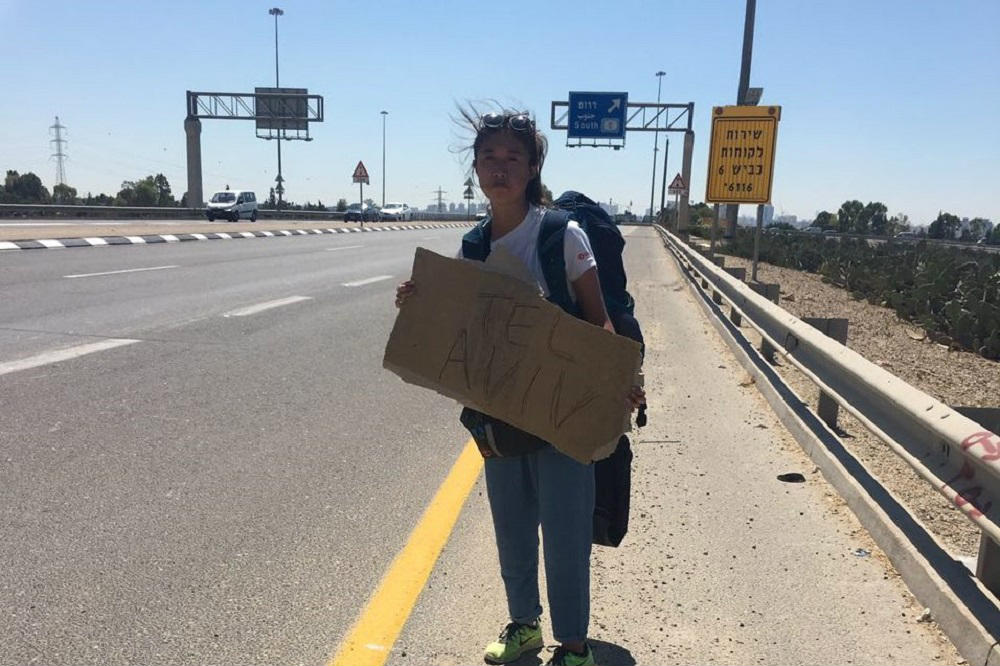 With both cash and energy running extremely low, most of my time in Tel Aviv was spent hibernating in the hostel or the nearby beach. While the city hosts many artsy back lane markets and fancy restaurants, nothing appealed more to me than sitting by the beach. Stretching about 2km long, the scene of clear waters, swarms of tourists in the sea and loud pop songs playing throughout the day was nothing like the conservative, war-torn Middle Eastern country I had in mind before I embarked on the trip.

The First of More Backpacking Trips

Other than being the first solo backpacking trip of my life, this journey included many other firsts—from exciting ones such as hearing first-hand accounts of the conflict to less pleasant ones aka getting pickpocketed. It might seem like my first backpacking trip was filled with more misfortune than anything else. Yet, I went home without feeling a tinge of regret.

My solo travelling journeys did not end there as I headed to eastern Europe and Cambodia for a month each after that. Some say it’s the thrill of living life on the edge while others may think it’s an addiction to the freedom that comes with exploring places alone. For me, what I loved most was the ample quiet time to observe and reflect, and the constant reminder to never take anything we have for granted.

5 Best European Cities To Visit For Female Travellers, By A Girl Who Backpacked For 3 Months