Warning: Spoilers for Squid Game ahead, proceed at your own risk if you’ve yet to watch the drama!

Since its release, Squid Game has quickly soared to become one of Netflix’s best performing K-Dramas to date. The show even recently landed the #1 spot in the Netflix U.S. Top 10 list, breaking Sweet Home’s record of #3. Well, with a surprise cameo by Gong Yoo (oppa alert), it’s no surprise the show is smashing records.

With a twisted premise and compelling characters, each episode of Squid Game will have viewers at the edge of their seats. Plus, the show’s abundance of eye candy doesn’t hurt either (looking at you, Wi Ha Jun and HoYeon Jung). 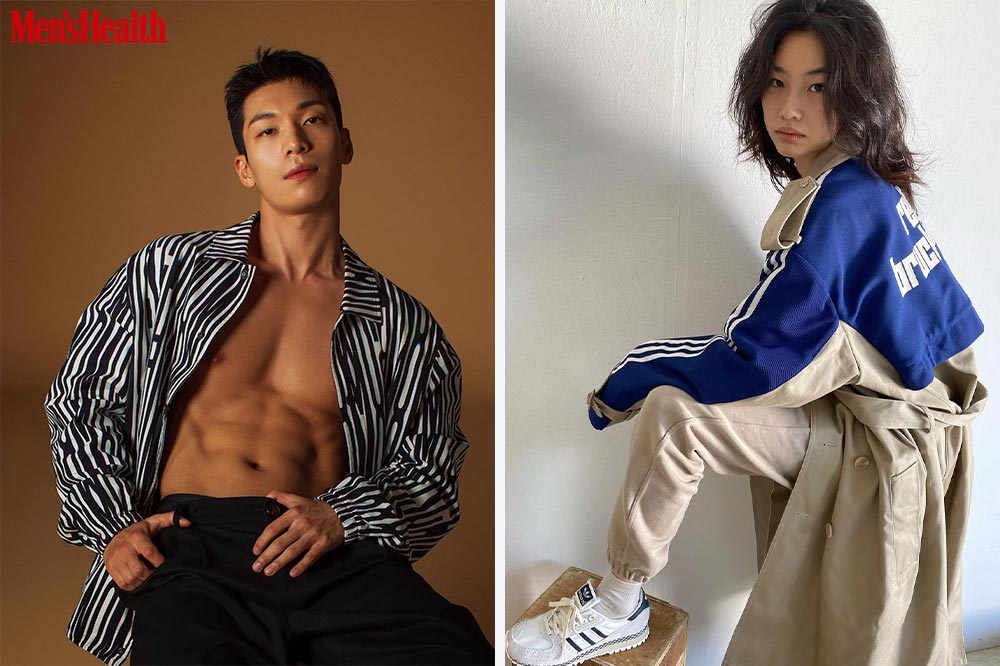 When I say I watch Squid Game for the plot, this is the plot I’m referring to
Source, source

To ride on the wave of Netflix’s latest overnight sensation, here are 11 takeaways from the K-Drama which explores the darker sides of humanity.

1. Be careful of who you trust 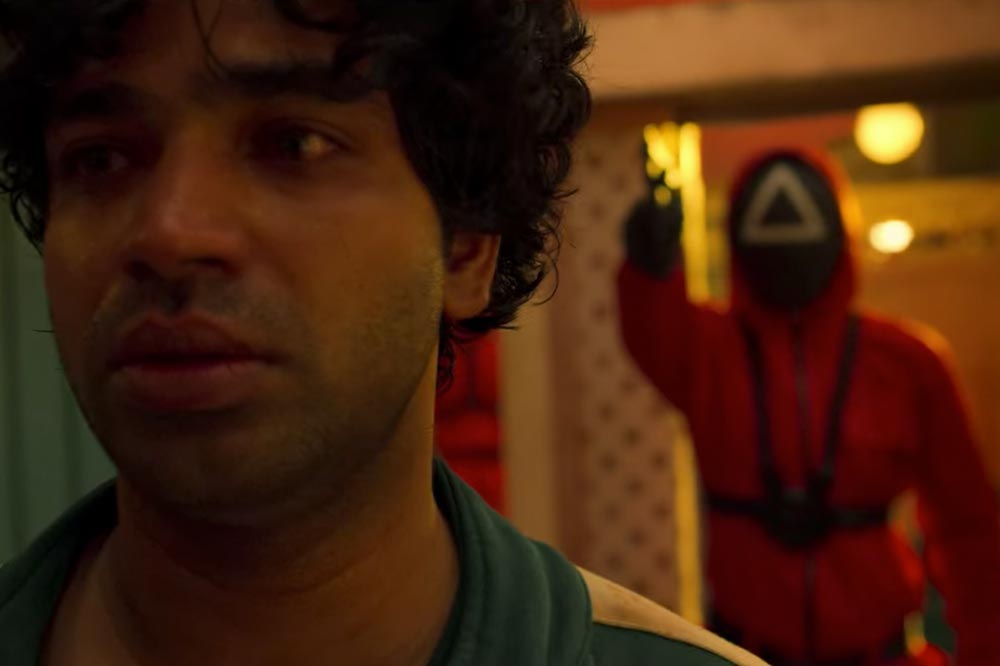 Ali coming to the realisation that Sang Woo has tricked him

Of all the treachery that happens in Squid Game, disgraced banker, Cho Sang Woo’s (Park Hae Soo), betrayal of Pakistani worker, Abdul Ali (Anupam Tripathi), has got to sting the most.

Throughout the show, Ali shows nothing but kindness and admiration to Sang Woo, addressing him as hyung (a term of endearment meaning older brother).

When Ali is about to emerge victorious during their game of marbles, Sang Woo tricks him into believing that they can both survive if they stall for time. He then sends Ali on a wild goose chase under the guise of sussing out the competition.

Of course, this turns out to be a ruse. At the eleventh hour, Ali realises that his marbles have been swapped out with stones. Too late to confront Sang Woo, he is brutally killed.

Unfortunately, Ali’s death is an example of how nice guys can finish last. It’s good to have faith in people, but sometimes, the world around us isn’t as kind. 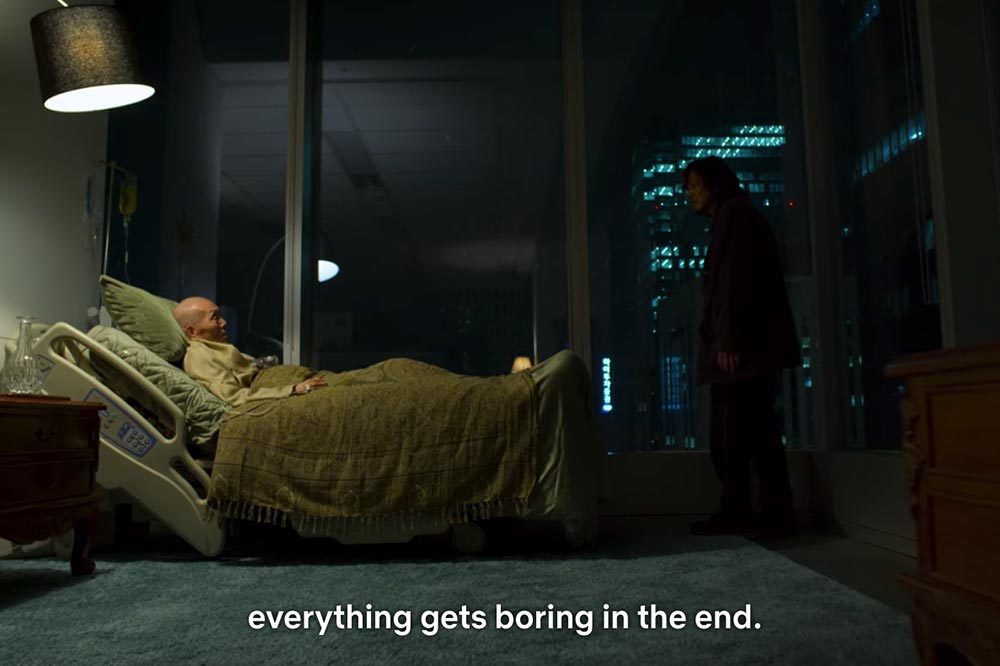 Finding out Player 001, Oh Il Nam (Oh Yeong Su) was behind the game all along in the finale was a real doozy. I had grown fond of the old man who never failed to have fun in the face of imminent death.

We learn that the game was masterminded by Il Nam as a way to entertain him and his ultra-rich clients who had grown bored of their lives. When spectating failed to satisfy him any longer, he made the decision to join the game as a player to experience the thrill of the life-or-death situations.

Il Nam’s actions, while cruel, teach us an important lesson. Money might be important, but it is certainly no substitute for doing something which makes life fulfilling. 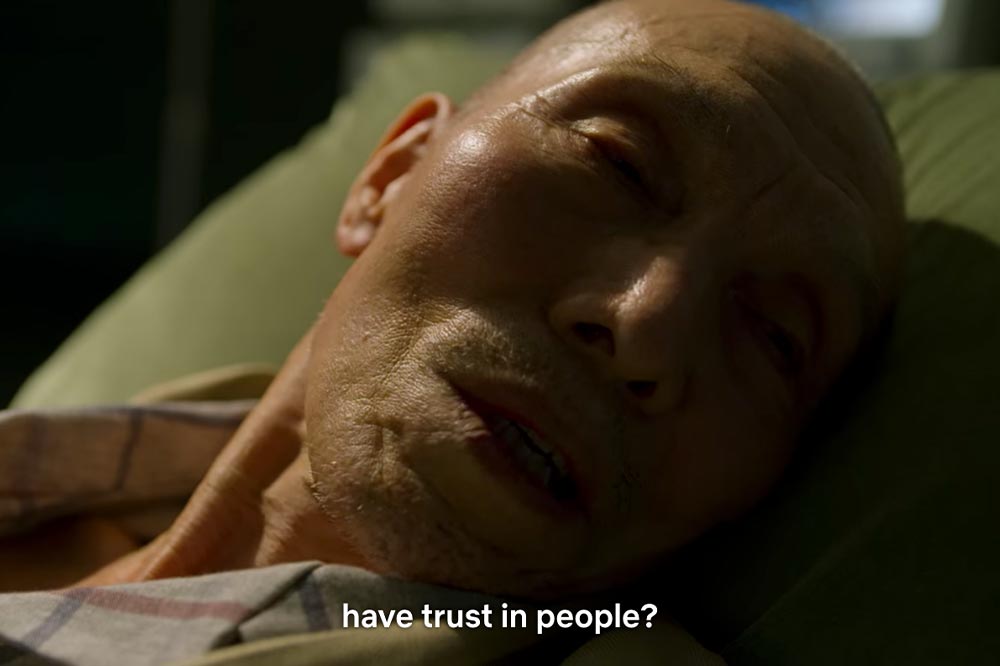 Although the final confrontation between Il Nam and the protagonist, Seong Gi Hun (Lee Jung Jae) was certainly depressing, it did end on a note of uplift.

During the meeting, they make one last wager: whether someone will come to the aid of a homeless man freezing on the street before the clock strikes midnight. 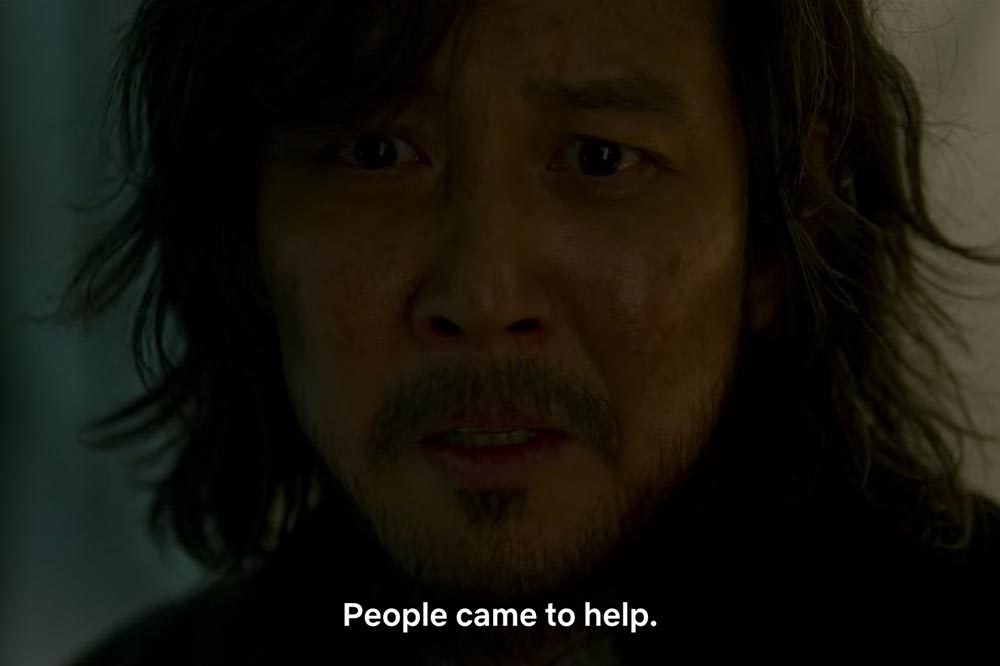 Gi Hun witnessing someone coming to the aid of the man

In a little “faith in humanity: restored” moment, people actually come to help the man. This helps Gi Hun realise that despite all he has been through, there is still some good left in the world. 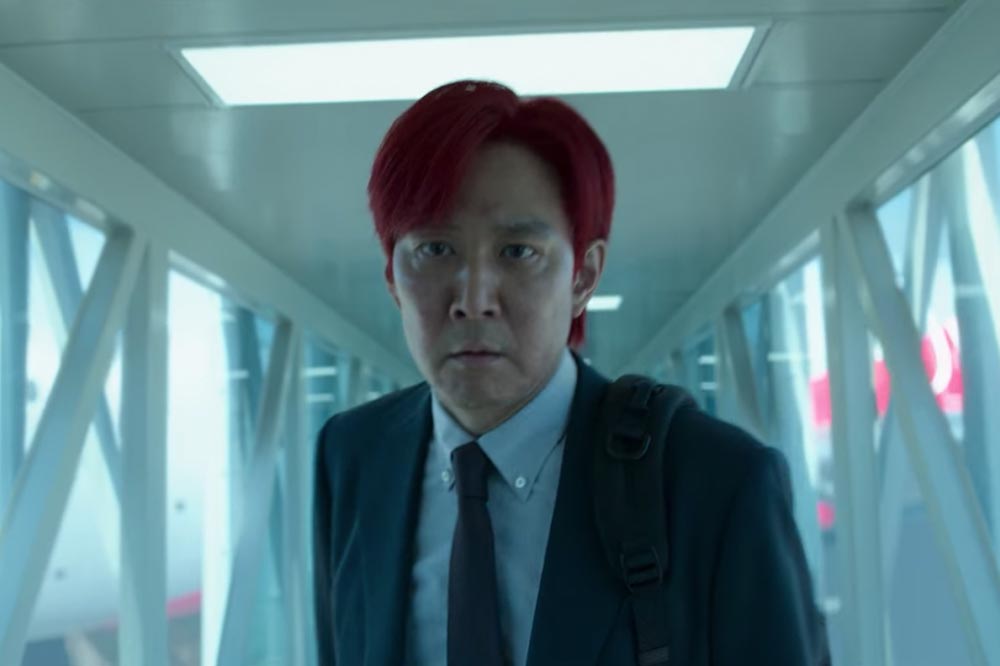 In a cliffhanger ending, Gi Hun walks away from his flight to the U.S. after vowing to take the game down

He sobers up from his year-long rut and fulfils the promises he made to look after Sang Woo and Sae Byeok’s families. He even gains resolve to take down the game, complete with a new K-Pop hairdo and all.

There’ll be moments in life that will question if there is any good left in the world. In those tough times, hope will see you through, so never let go of your humanity.

4. Addiction is a slippery slope 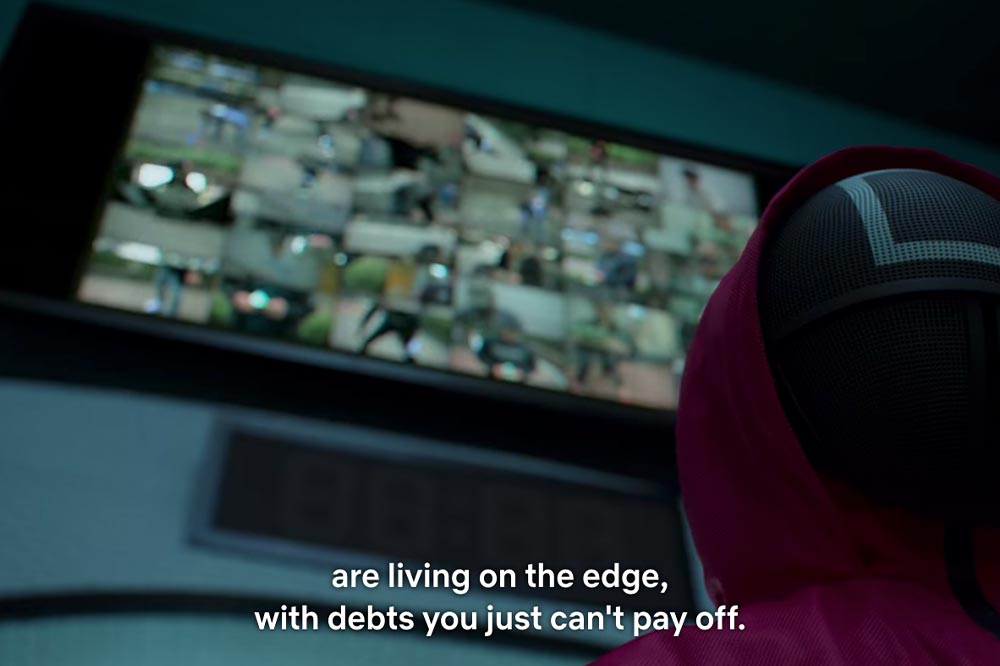 One thing all the players in Squid Game have in common is that they are heavily debt-ridden. In Gi Hun’s case, this is due to his gambling addiction. 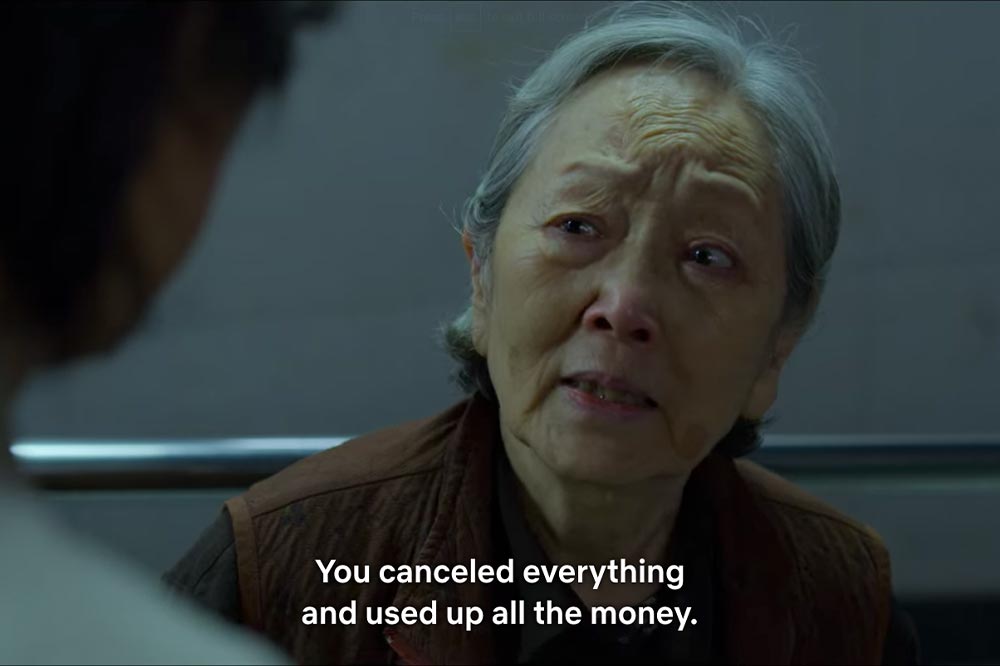 Gambing affects all aspects of Gi Hun’s life. He is unable to support his daughter, to the point where he tries to win her a birthday present through a claw machine. And, when his mother requires medical attention for her diabetes, he is unable to pay her bills.

At the end of his rope, Gi Hun is convinced to join the game to solve his financial difficulties. Even when given an out after the first game’s massacre, Gi Hun decides to go back and gun for the prize money.

TLDR; Gi Hun’s addiction culminates in him willingly throwing himself into a crazy situation. Next time you see one of those anti-gambling ads on TV or YouTube, you know why.

5. Don’t be too quick to condemn others I admit I was quick to condemn most of the characters in Squid Game. From gambling to embezzlement, I assumed most players racked up debt due to indulgence in vices.

North Korean refugee, Kang Sae Byeok (HoYeon Jung) though, is an exception. Her motivations are more noble than the rest, accumulating debt to get her mother out of the North. During the game of marbles, we also realise that she wishes to use the prize money to reunite her family.

Sae Byeok’s backstory is a poignant reminder not to make snap judgements about people in certain predicaments. Like Sae Byeok, there might be a very good reason for it.

6. Brains can be worth more than brawns 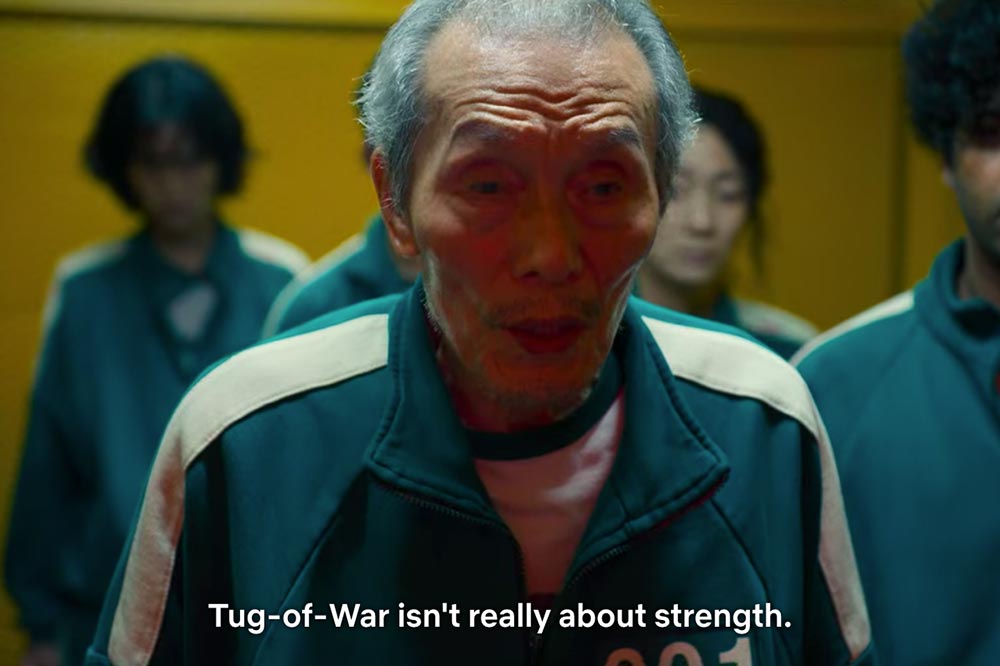 Despite being out matched by their opponents in terms of physical strength, Gi Hun’s team still emerges victorious in the tug-of-war game.

Coming up with not one, but two, ideas on the fly to trip up their opponents, the team proves that good strategy and teamwork trumps strength in many situations.

I guess the saying “brains over brawns” rings true after all.

20 Steamiest K-Drama Kissing Scenes Ranked, From It’s Okay Not To Be Okay To Hospital Playlist

7. Desperation and greed bring out the worst in people 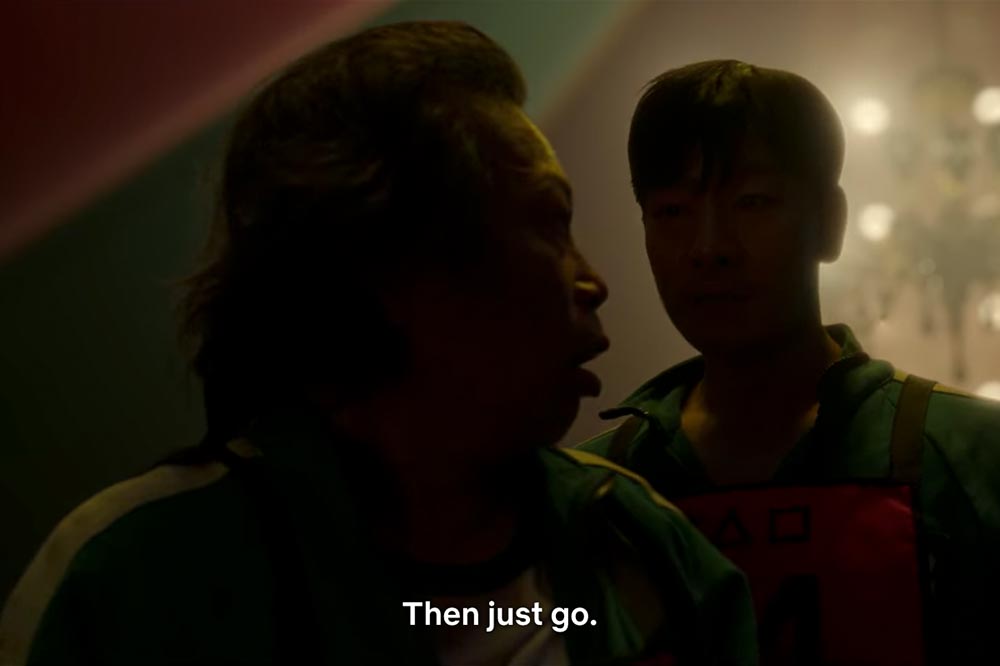 Over the course of the series, we see Sang Woo’s vicious side gradually replace his collected demeanour. By the time we reach the penultimate game, his desperation to survive takes over as he pushes his fellow player off the bridge without hesitation. While waiting for the final game to start, he even murders the injured and defenseless Sae Byeok too. 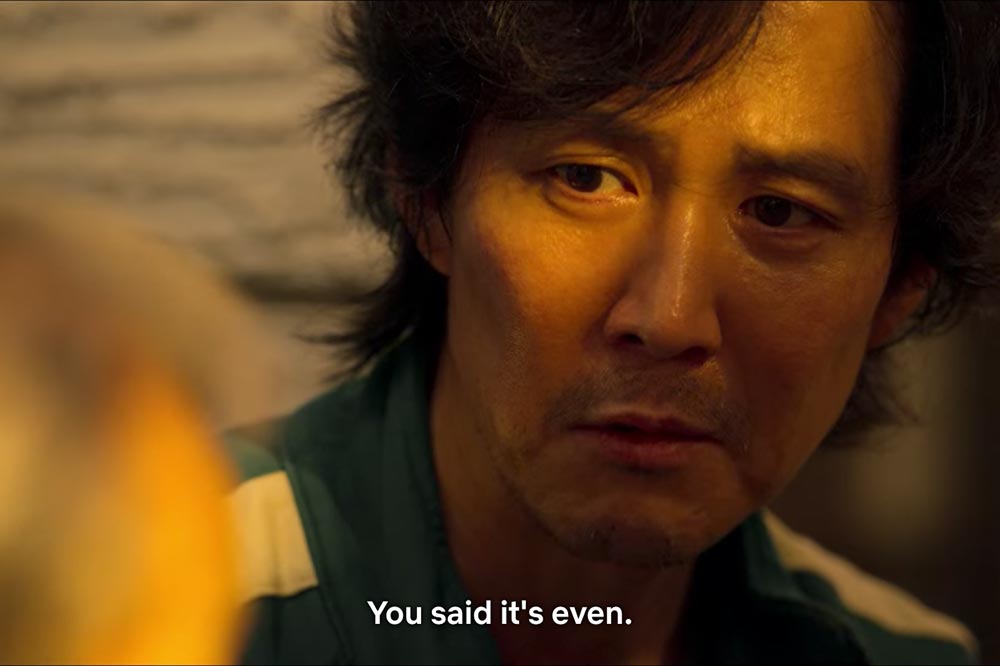 Gi Hun is also willing to put aside his morals for the sake of survival, capitalising on Il Nam’s dementia to trick him and win their game of marbles.

We can claim that we would never resort to underhanded means like Sang Woo and Gi Hun. But the truth is, we will never know how far we’re willing to go when driven by greed and desperation.

8. What goes around truly comes around 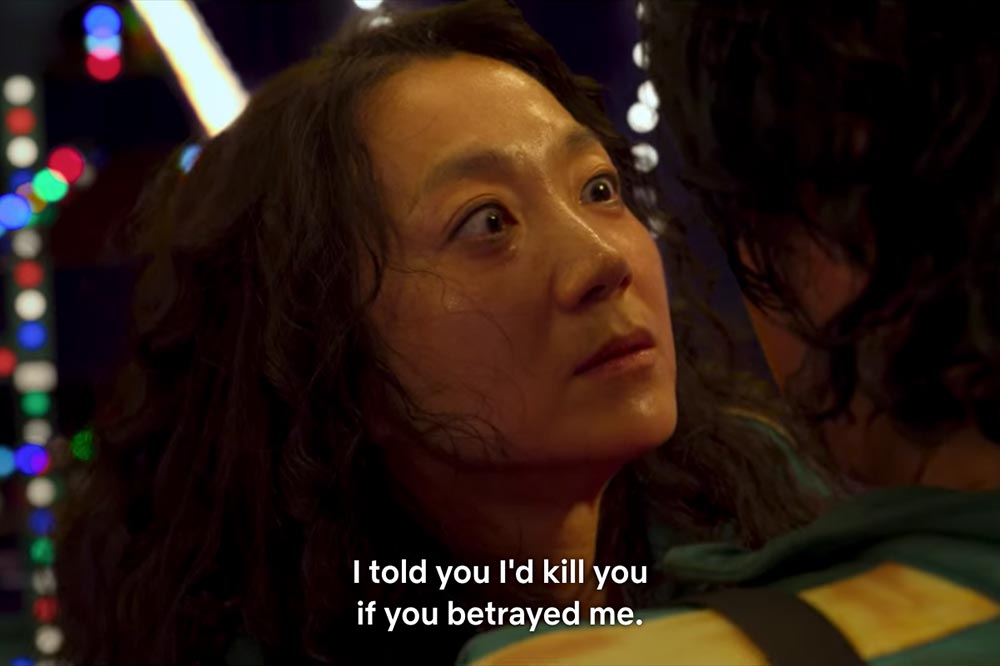 Sure, Sang Woo has his punchable moments (read: Ali’s death). But, I would argue that gangster Jang Deok Su (Heo Sung Tae) is the absolute worst.

Even though his former Han Mi Nyeo (Kim Joo Ryoung) saves his life by lending him a lighter during the honeycomb game, he chooses to leave her for dead during tug-of-war.

That’s why, when Mi Nyeo kills Deok Su in a murder-suicide as revenge, I couldn’t help but feel a sense of vindication. It felt like an affirmation that bad deeds do not go unpunished.

Karma’s a b*tch and her name is Han Mi Nyeo.

9. Try to think of out-of-the-box solutions 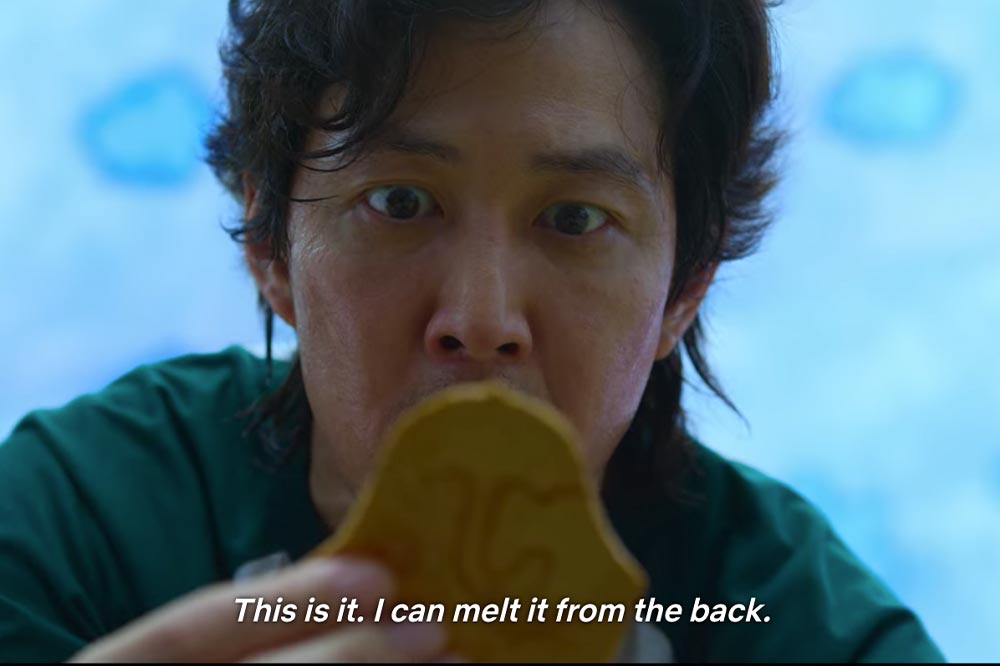 All hope seems lost for Gi Hun when he ends up having to carve out the hardest shape for the honeycomb game until he discovers an unorthodox solution.

After realising that he can melt out the umbrella shape instead of carving it with a needle, Gi Hun begins to lick his biscuit profusely. In doing so, he eliminates the risk of cracking the biscuit and losing the game.

We should strive to think outside the box. You never know, you just might be able to find the solutions to some of life’s most common problems.

10. Being last isn’t always the worst 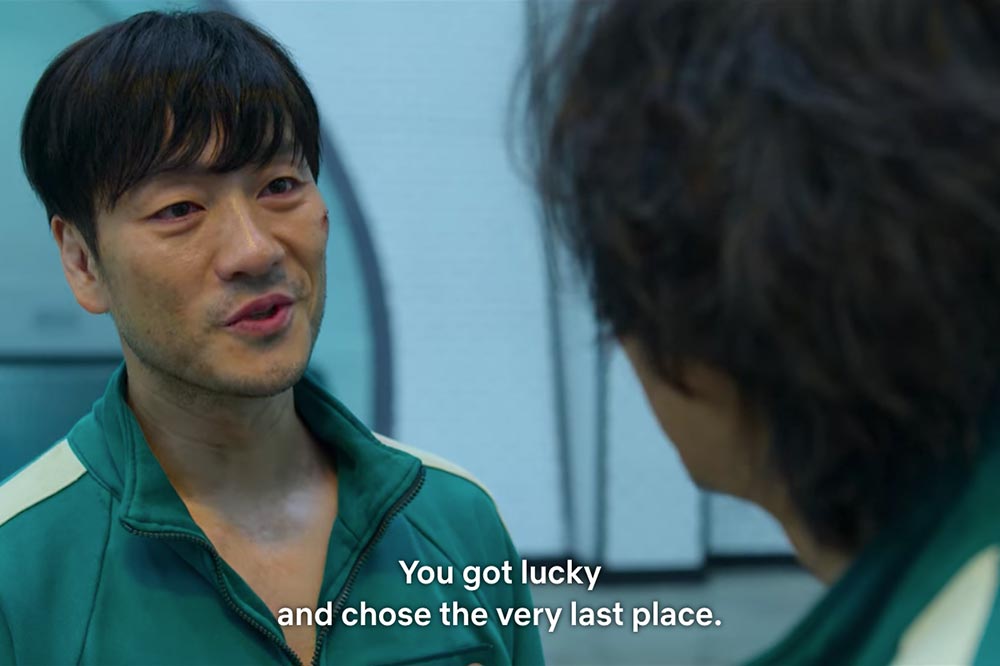 In the fifth game, Glass Stepping Stones, players take turns choosing between each pair of glass tiles as they progress through the bridge. Choose wrongly, and the player falls to their death. Gi Hun, slated to go last, thus gains the biggest advantage – the later you go means the fewer tiles you have to guess.

This game is a metaphorical representation of how going or being last isn’t always the worst thing in the world, despite what society has brought us up to think.

11. Your life can shine even in its final moments 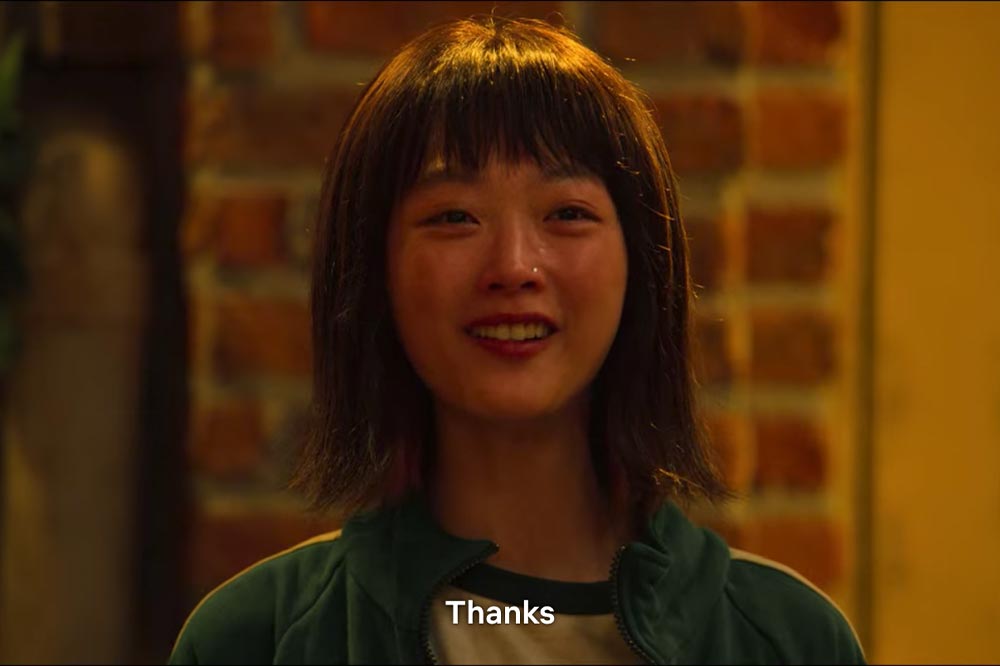 Ji Yeong thanking Sae Byeok right before she is killed

We’re first introduced to the mysterious Ji Yeong (Lee Yoo Mi) when she is recruited by Sae Byeok to join Gi Hun’s tug-of-war team. In the subsequent game, it’s revealed that she is an ex-convict recently released from prison for killing her abusive father.

Ji Yeong ends up throwing the marbles game to let Sae Byeok win as the former has nothing to live for outside the competition. Before she dies, Ji Yeong thanks Sae Byeok for playing the game with her, as if expressing gratitude for letting her life finally count for something.

Ironically, Ji Yeong’s spirit shines brighter than ever in her final moments. Choosing to sacrifice her own life so that Sae Byeok may survive gave Ji Yeong the chance to live meaningfully, even if it was only for a brief moment.

These 11 life lessons show that aside from its shocking and twisted premise, Squid Game has a whole lot of substance to it. With its open-ended finale that gives hope for a season 2, fingers crossed we will hear news of Squid Game’s renewal soon.