BTS might be the faces of many brands but earlier in April this year, they were selected as the global ambassadors for Louis Vuitton. They made an appearance in the brand’s short fashion film wearing the Fall/Winter 2021 collection and now, they are back to rock the Spring/Summer 2022 collection.

Featuring a collaboration between Louis Vuitton, GQ Korea and Vogue Korea, the boys pulled off the collection yet again. Read on to check out their killer looks. 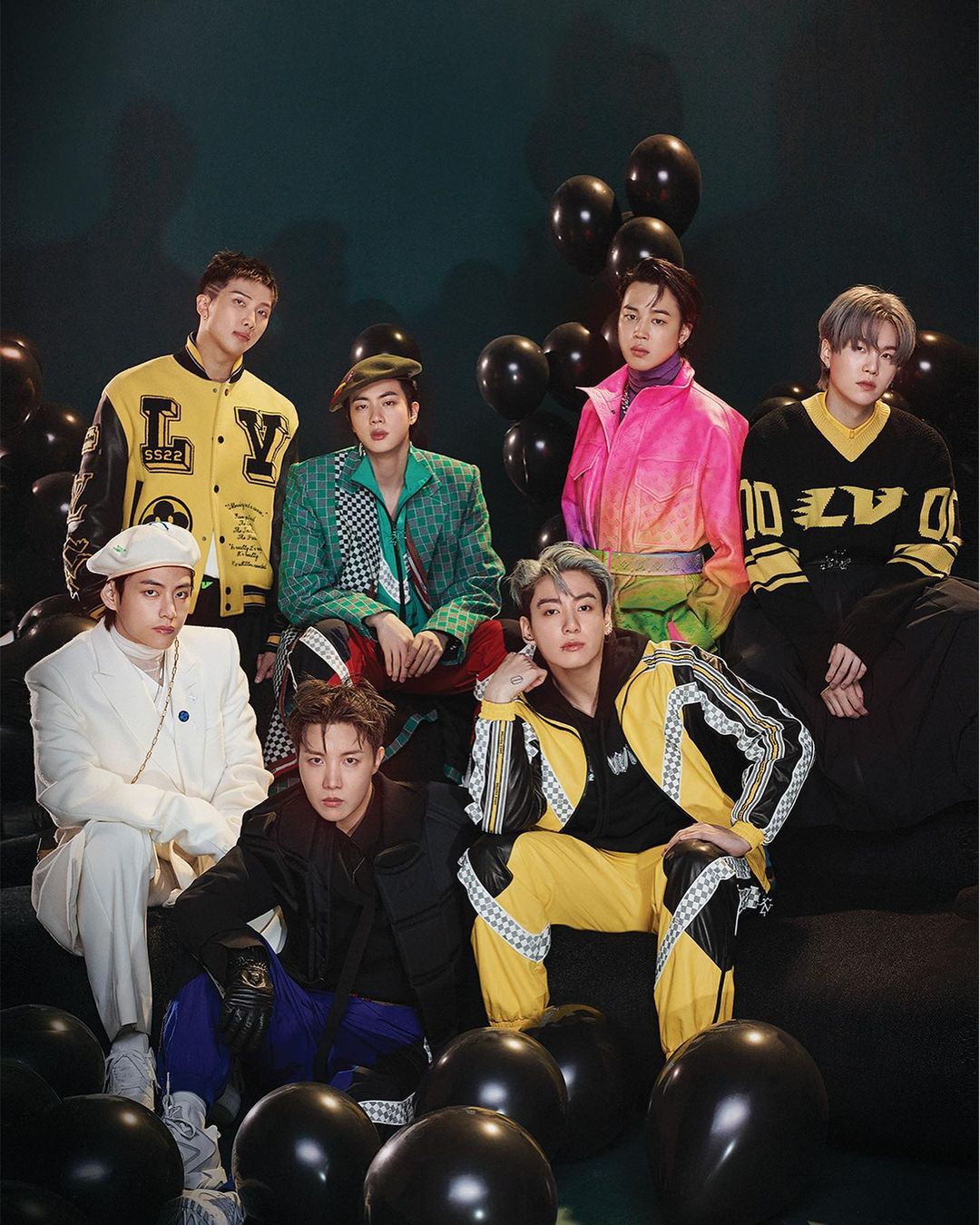 For those who didn’t know, Louis Vuitton’s menswear artistic director, Virgil Abloh passed away almost a month ago. Paying tribute to his legacy and final runway for the brand, the boys of BTS came together wearing apparel that are inspired by Virgil Abloh’s “A Piece of the Rainbow” collection.

From monogrammed jackets to colourful plaid outerwear, check out how each member rocked their own look. 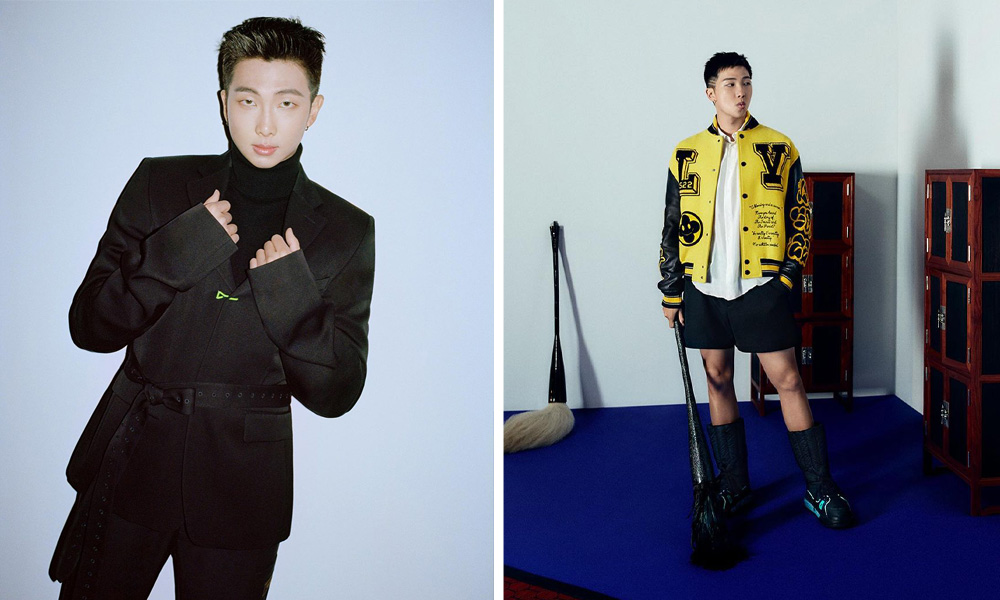 As the leader of the group, RM knows when to be serious and when to have fun, especially through the styling of these two outfits. On the left, he puts on an all-black suit, showing an edgy yet suave look. Whereas for the photo on the right, he looks ready for a sports game in a yellow-black varsity jacket with ‘LV’ written in a large font. 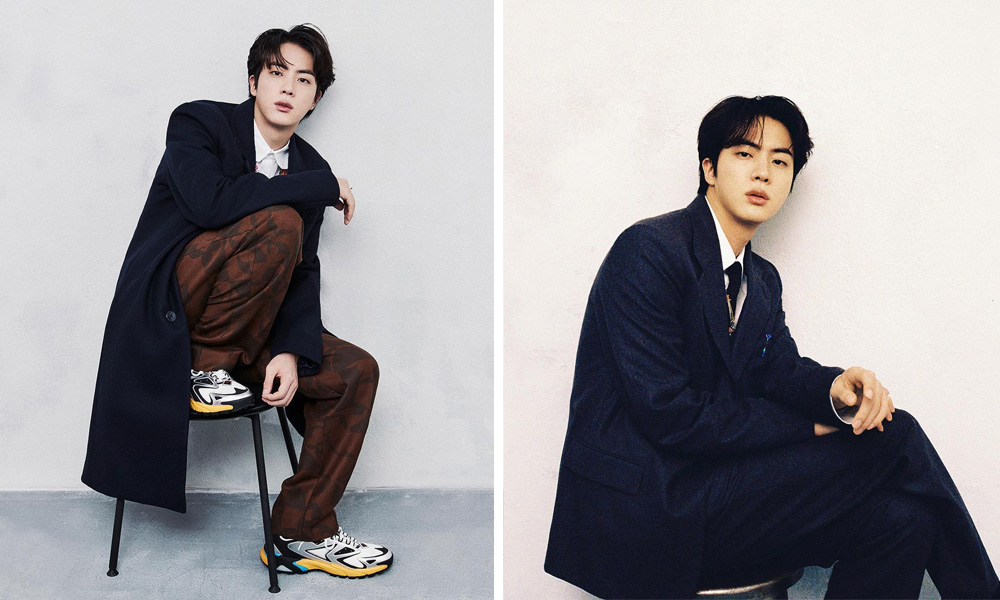 While Jin might have found his recent self-produced track ‘Super Tuna’ embarrassing because of its comical choreography, we love a man who can pull off different looks. On the left photo, Jin charms with his take on winter fashion ‒ a black trench coat with brown patterned pants. As for the photo on the right, he exudes classy vibes with a deep navy suit and a tie. 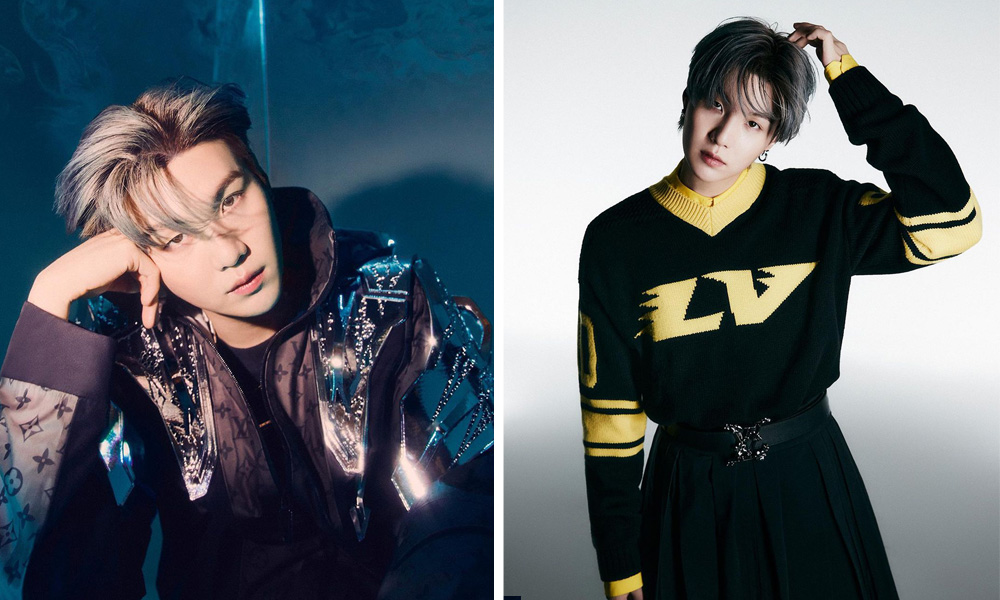 Going for the glitz and glam, Suga puts on a brown jacket with reflective pieces that capture the light along with the signature motifs of Louis Vuitton. Perhaps if he wears this on a stage runway, he would literally be too glaring for the eye.

For his next outfit, Suga gives off bumblebee vibes thanks to the black knit sweater with ‘LV’ in yellow written in the middle. 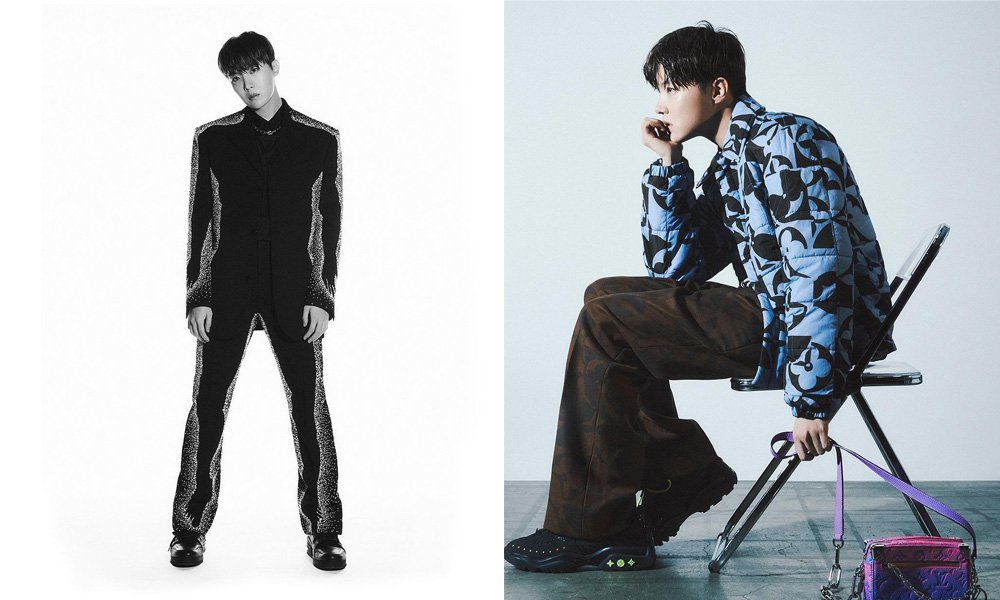 The first look of J-hope brings to mind a disco outfit found in the 80’s thanks to the shimmery gemstones on the black suit, as if ready to break into some dance moves.

We know that J-hope is hot like summer but he can also rock an icy blue winter jacket that matches well with his footwear. Once again, the signature motifs of Louis Vuitton can be found on both fashion items. 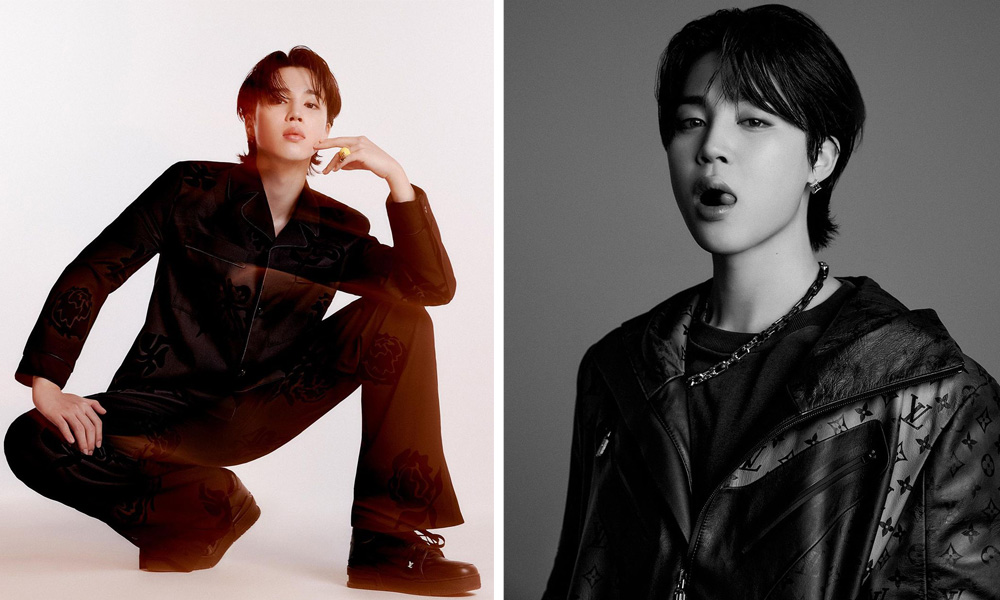 No longer a baby mochi, Jimin takes the breath of ARMYs away when he suits up in a sleek black outfit as seen in the left photo. The button-up top goes well with the bell bottom pants that come with delicate pattern prints.

He also rocked a bad boy look in the right photo when he was accessorised with a necklace and paired with a Louis Vuitton patterned jacket. 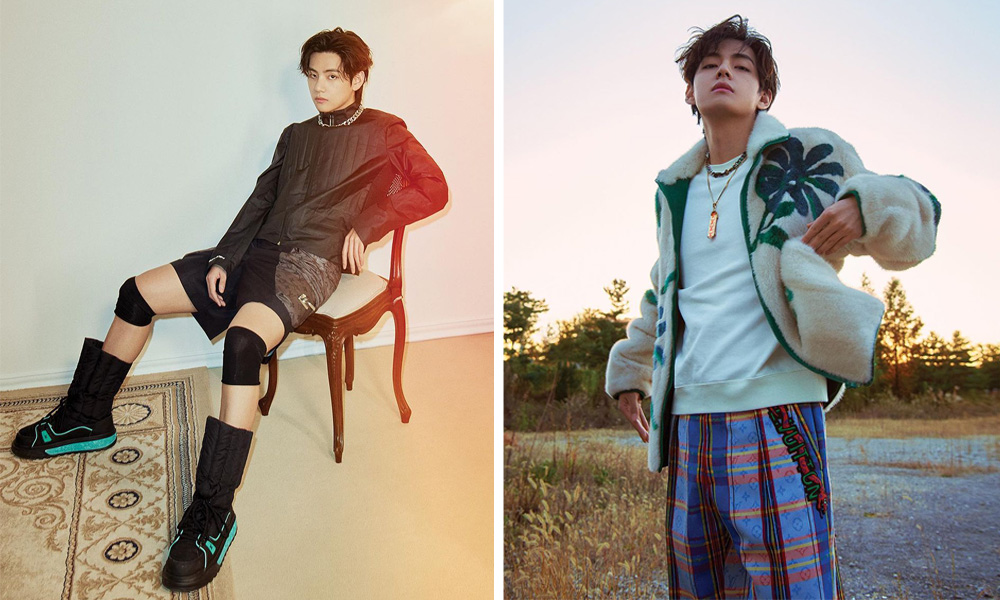 ICYMI, V has been named the “Most Handsome Man in the World” in 2021 again. Unlike the other members, his first look actually features him wearing a pair of shorts that has a Louis Vuitton classic brown pattern on one side. He completes the outfit with a black long-sleeved top with a thick gold necklace.

Taking a step away from monochrome, V’s second outfit has a brighter colour palette. The white and green fleece and plaid pattern pants give a nod to Louis Vuitton’s use of colours. 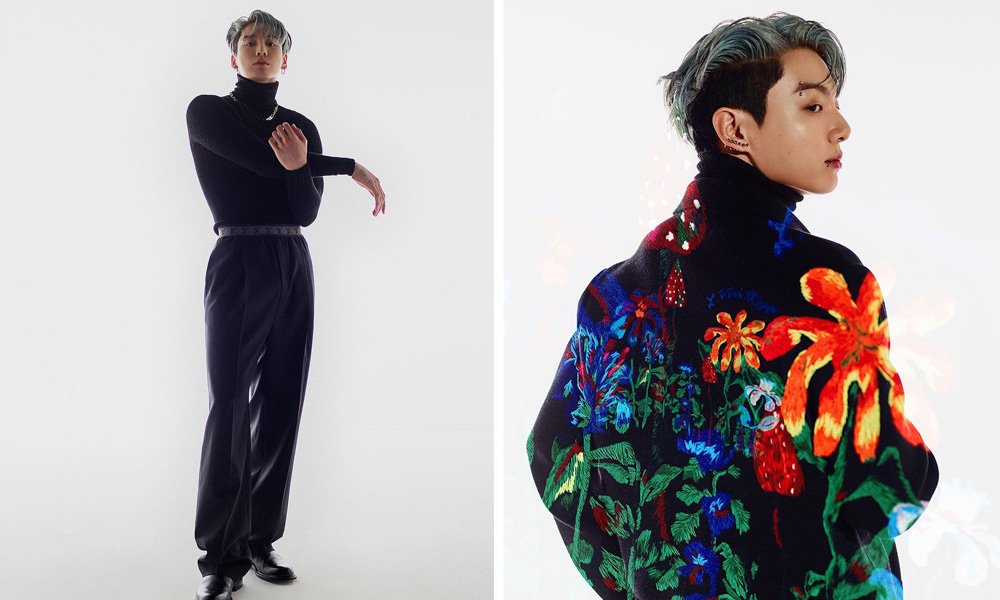 Jungkook recently caused laughter among fans thanks to his ingenious Instagram handle and now, he is back to impress with his urban-influenced outfit as seen on the left. The black turtle neck top is matched with black bottoms and he gives a lil’ extra something with the combination of a necklace and belt.

In contrast with his first look, the second photo showcases him wearing a colourful neon embroidered jacket with floral and fauna designs.

You’re not alone if you find yourself once again falling for the charms of BTS in their Louis Vuitton’s Spring Summer 2022 collection shoot. For more photos of the boy band, you can visit GQ’s official Instagram. There is also a teaser on Louis Vuitton’s YouTube for the January 2022 edition of GQ Korea and Vogue Korea magazines.