Fighting COVID-19 As A Couple

Before they’ve even recited their vows, John*, 28, and Jane*, 25, are putting “in sickness and in health’ to the test.

The couple, who are engaged, both tested positive for COVID-19: John, a banker, in late March; Jane, a producer, a few days later. Initially, they were warded separately at the National Centre for Infectious Diseases (NCID), before being moved to the same room for a few days. They have since been transferred to D’Resort, where they have been isolated together for more than 3 weeks.

John first started experiencing flu-like symptoms in mid-March. He visited 2 different doctors; each time, he was told it was a normal flu and given a few days MC. It was only 2 weeks later that he started exhibiting more severe symptoms. “I suddenly felt very sick. I was coughing very badly, was very breathless and I kept perspiring,” he said.

At this point, Jane had not shown any signs of having the virus.

The couple live together in an apartment with their dog. When John went to the clinic to get tested, he insisted that Jane shouldn’t come along. He told her, “Don’t come. If you come, even if you don’t have the virus, you are going to pick it up.” So Jane stayed home, thinking, “What are the odds that we’re gonna get it?”

When the call finally came to inform John that he’d tested positive, he was in shock. He said, “My first reaction was, ‘How the hell did I get this?’ I didn’t even know anybody who was quarantined. Like, how can be so suay (‘unlucky’ in Hokkien) right? But I had no choice, they were coming to get me, so I just had to pack my things.”

A matter of time

After the ambulance arrived to bring John to NCID, Jane was left alone at home.

“I was like, what the hell am I supposed to do? So I did the only thing I could think of, which was to clean everything he’d touched… which was everything in the house.” She cleaned the sofa, the controls and the plugs; changed the bedsheets and the pillows; and even washed their dog, worried he could be a carrier.

“But he still cheered me on. He was like, ‘Good job, you did a very good job cleaning.’”

John knew, however, that it was only a matter of time before Jane got the virus too. He explained, “They said it’s very contagious and that there’s an incubation period. We sleep together on the same bed every day. Sooner or later, she will get it. And true enough, 2 days later, she fell sick.”

It was the first time in the five years they’d been dating that the couple had been apart for more than 2 days. During this period, they kept in contact with each other via Whatsapp and FaceTime. One of John’s meals at NCID

At NCID, John was first warded with another male patient. At his weakest, he had a high fever, couldn’t eat because he had ulcers in his throat and couldn’t breathe at night. “That was the worst part. At night, you wake up because you can’t breathe,” he shared.

When it was Jane’s turn to be warded, she stayed with a stranger for the first 3 days. At NCID, patients are not allowed to leave the room at all. So even though they were just one floor apart, the couple was not able to see each other. Jane in isolation at NCID

Jane said, “When we weren’t roomed together, I couldn’t see whether he was eating or not. So we would Skype with each other and he would pretend to eat. He’d be like, “The food is not so bad, you just try to eat okay? Don’t worry, it’s really quite nice, just try.”

When they were finally moved to the same room, they were met with an enthusiastic reception. Jane recounted, “The nurses looked at us like we were specimens in a zoo. They were all like, ‘Oh my god, so sweet these two.’

“I don’t know why everyone is so thrilled that we’re a couple, that we got this virus together.”

When they were eventually transferred to D’Resort, they received an equally warm welcome.

Staying at an isolation facility

Patients who are otherwise well but still testing positive for COVID-19 are transferred to community isolation facilities, including D’Resort and Singapore Expo. 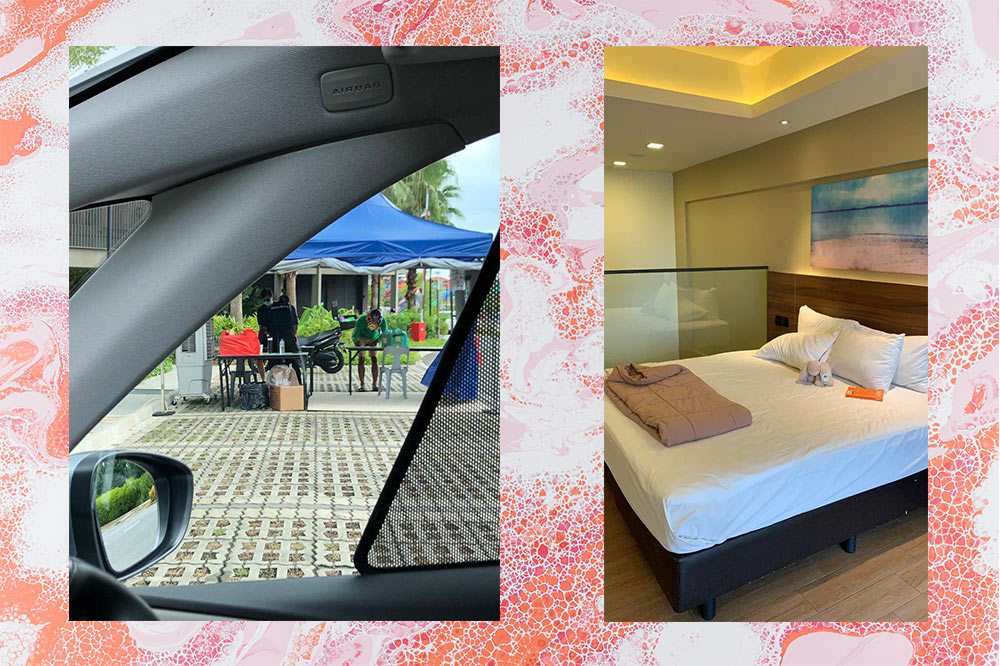 The couple has been at D’Resort for 3 weeks and counting. John said, “We’ve been stuck in a room for weeks. We haven’t seen the outside. So it gets a bit… it gets a bit fucked up lah. And there’s not much to do, you know, all we do every day is watch TV, wait for food to be delivered to us and exercise in the room.

“Jane does ab workouts on a towel on the floor. For me, because they give us 2 x 1.5-litre water bottles every day, I put those in my duffel bag and try to do some weights. Because [you] cannot just eat and sleep every day.”

In between, the couple keep in touch with their loved ones via technology, whether it’s FaceTime with their mums or playing Houseparty with their friends. 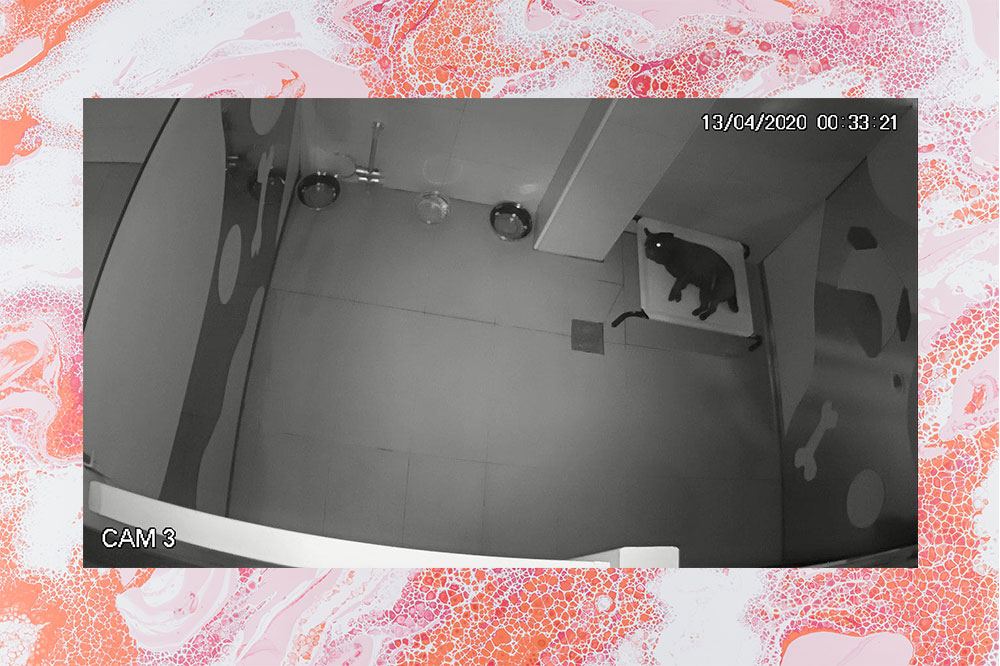 Technology has also enabled them to watch over their dog, who is staying at a kennel while they fight the virus together. John said, “I think one of the hardest things is [not having] our dog [with us]. There’s a camera so we can see him every day, so it’s fine. I mean, it’s not fine but…”

“It’s torture! I miss him so much,” Jane exclaimed.

This Millennial Couple Are Overcoming COVID-19 Together

Ironically, the couple is aware that they’ve had plenty of practice for this current period of isolation. John said, “Your first question to us was what we did as a couple before getting COVID-19. This is what we usually do, we just stay home and watch Netflix. The majority of the time that we have free, we are at home.” Jane added, “We’ll watch TV or we’ll cook, we really spend a lot of time together just chilling at home.”

But it’s very different being confined to a room versus the rest of us who are going through the Circuit Breaker period. While we are able to leave our houses to go for a run or go out to get essentials like groceries alone, the couple have only been outdoors while moving between rooms or isolation facilities. 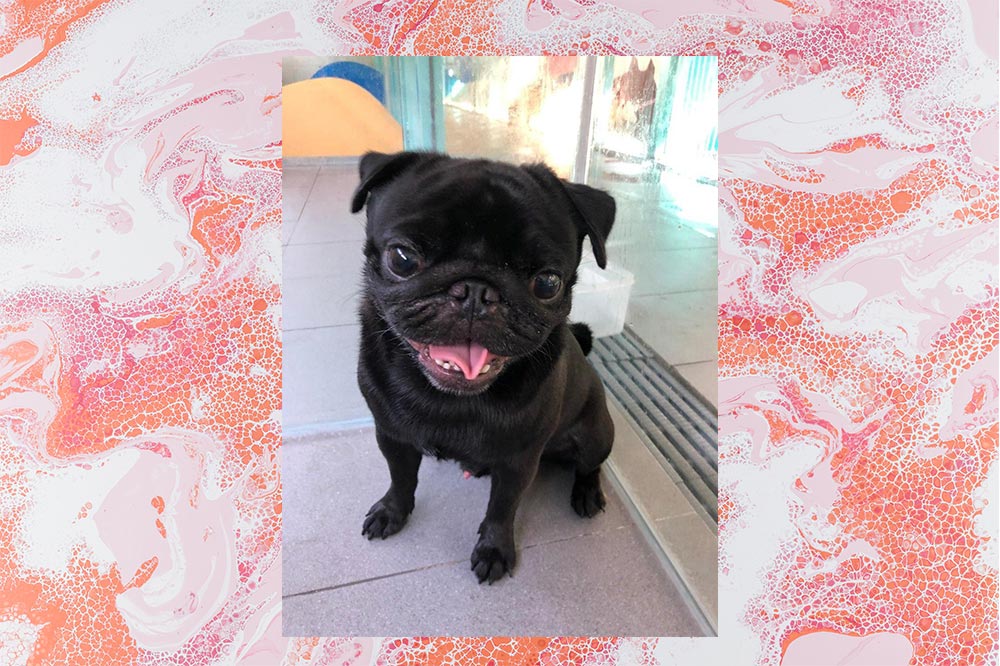 Towards the end of our interview, I asked John and Jane what they are most looking forward to once all this is over and they are finally discharged. Their answers are unanimous and instantaneous. After almost a month in isolation, all this couple wants is simple: to go home and be reunited with their dog.

And when they eventually do get married, Jane has an idea for her vows: “I think after this, I’m going to write a book: I Was With the Person Who Tried to Kill Me with the World’s Deadliest Disease. That will be in our vows. People will be like, ‘What happened?’ And I’ll be like, ‘Let me tell you this very sweet story. He literally tried to kill me.’”

*Not their real names.