They say your time at JC is the most memorable period of your life… but only if the word ‘memorable’ was synonymous with ‘torture’, ‘pain’ and ‘death’!

Ranging from PW hell to skipping lectures to study even more, here are 20 things all JC kids can relate to.

1. You went broke because of stationery items and school notes

You may have initially thought, “Wah, JC no more textbook, confirm the notes all damn cheap.” Until you realise you bought “cheap” sets of notes every other week for every. single. subject!!!
With approximately 5789 essays to write, you needed so many pen refills that you almost went bankrupt.

2. You always wondered if getting an ‘E’ or ‘S’ grade was a pass

Every time you got back your results, you’d pray that you passed, even if it was merely a sub-pass in the form of an ‘E’ or an ‘S’ grade. As long as you technically pass, who cares if you get below 50/100? Or so you tell yourself…

Hell; also known as Project Work. Being forced to work with people you’ve known for less than 2 minutes and to come with “innovative” solutions for social issues is what we JC kids define as hell.

I mean, even if the gahmen, who are more qualified and experienced, can’t think of a solution to issues such as littering, what makes you think that we small fries can do it??? @MOE #JUSTICE4JCKids

4. Your phone wallpaper was the exam schedule

At one point in time, your phone wallpaper was the exam schedule. This was a form of deterrent against distractions because every time you used your phone, you were reminded of the rapidly decreasing number of days till D-day.

5. You had one EC whom you’ll never ever approach

EC: Eye Candy; someone good looking but may not necessarily be attractive the minute he opens his mouth.

Your EC is someone whom you’ve admired (been thirsty for) from afar and occasionally stalked around the school campus to hit your daily quota of fangirling. Your friends would double up as your ‘EC Radar’ to notify you of his whereabouts or they’ll help to discreetly take pictures of him for you.

6. You had that one tutor you crushed on

Be it that young, handsome GP tutor or that aloof, middle-aged Math tutor; we’ve all had our fair share of tutor crushes. It’s only natural that you cultivate feelings of admiration for someone you greatly respect and see way too much.

Although such thoughts/fantasies if acted upon are, for a lack of a better word, illegal, it never stopped you and your friends from having inside jokes and code names for the tutor.

7. You used to skip lectures… to study

Sometimes JC lectures are absolutely useless. So what do we, model Asian students, do? We ironically pon lectures to study at the library. Personally, I 100/10 recommend this method if you honestly feel you make better progress by not attending a lecture. Besides, there’s always the recorded lectures and notes you can borrow from your trusty friends…

8. You spent way too much time at the library

So much so that you’re on a first-name basis with the NLB library staff who leave notices when you hog the seats over lunch.

9. You took every opportunity to ask for a full-day

Perhaps this only applies for my own JC, but at the end of every school event or celebration, there’s bound to be someone chanting ‘FULL DAY, FULL DAY!!” before the whole school joins in.

10. Your circle of friends was very unpredictable

One important lesson I learnt was to not become a stock character by attaching myself to one particular clique and boxing myself into the stereotypes.

11. Your tutors were sometimes your homies too

Most tutors become a source of comfort at our second home. They’re known for their #realtalk when we lag behind in class and their never-ending friendly banter during tutorials to keep students engaged.

My class was even comfortable enough to give our tutors nicknames such as Sandhya Scooter, Teo Truck and Ho Helicopter!

Most JCs have CCA clubs selling flowers, cards and chocolate packages in preparation for Valentine’s Day. Sometimes the clubs may even offer anonymous delivery services, so there’s a high chance you’ve either sent or received a gift or two.

Unfortunately, the only gift I received was… from myself. #ForeverAlone

13. You have that one Starbucks drink that gives you horrible nightmares

After treating Starbucks like your third home, certain drinks start to become more significant. Hence, every time you drink the same drink, you’ll be transported back in time.

14. You’d be chased out by the security uncle/auntie

And there was probably not a single school break that went by without you going back to school for another mugging session. 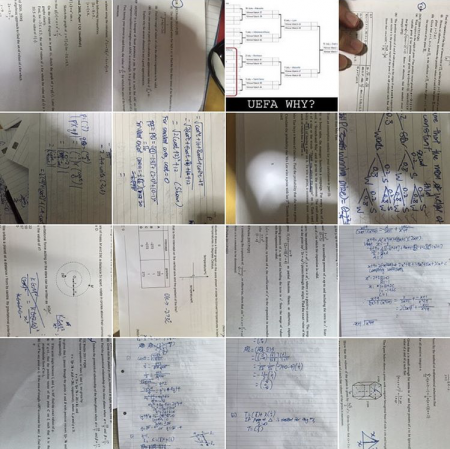 16. You made insane notes

Your notes were colour-coded and filled with sticky notes of different shapes and sizes. You also made mind maps with elaborate illustrations and used crazy acronyms to memorise various factors and terms.

17. You were a true rebel without a cause

Eating inside lecture theatres despite the ‘No Eating’ sign? Check.
Altering your school pants until it’s not humanly possible to bend or altering your skirts to ‘four fingers above your knee’ length? Check.
Coming late to school and lying that the tap-in machine “wasn’t working” as a lame excuse? Check.

18. You know how to smoke your way out of everything

A common joke during the haze season is that the haze was collectively caused by the JC kids’ smoke in our written exams.

19. You’ve given up way too many times

There wasn’t a day that went by without thinking of giving up on everything because you weren’t getting immediate results—be it for academics or relationships/friendships.

I even had this particular toilet I went to when I had a breakdown. #truestory

20. But you got back up more times than you gave up

My motto throughout JC was: If I give up tonight, I will start again tomorrow morning.

Regardless of what happened, how well you performed or how many friends you had, the bottom line is that you made it. You were a like a warrior, trooping through all those struggles.

What matters most is what you’re gonna do now. Your life is only just beginning!