A couple of months ago, KFC UK released bucket hats and accessories much to the delight of fried chicken fans. This time, KFC Singapore has teamed up with local designer, Amos Yeo – or otherwise known as Amos Ananda – for a  streetwear capsule collection in celebration of National Day. From Colonel Sanders inspired T-shirts to a tote bag, get ready to add one of these original designs to your wardrobe. 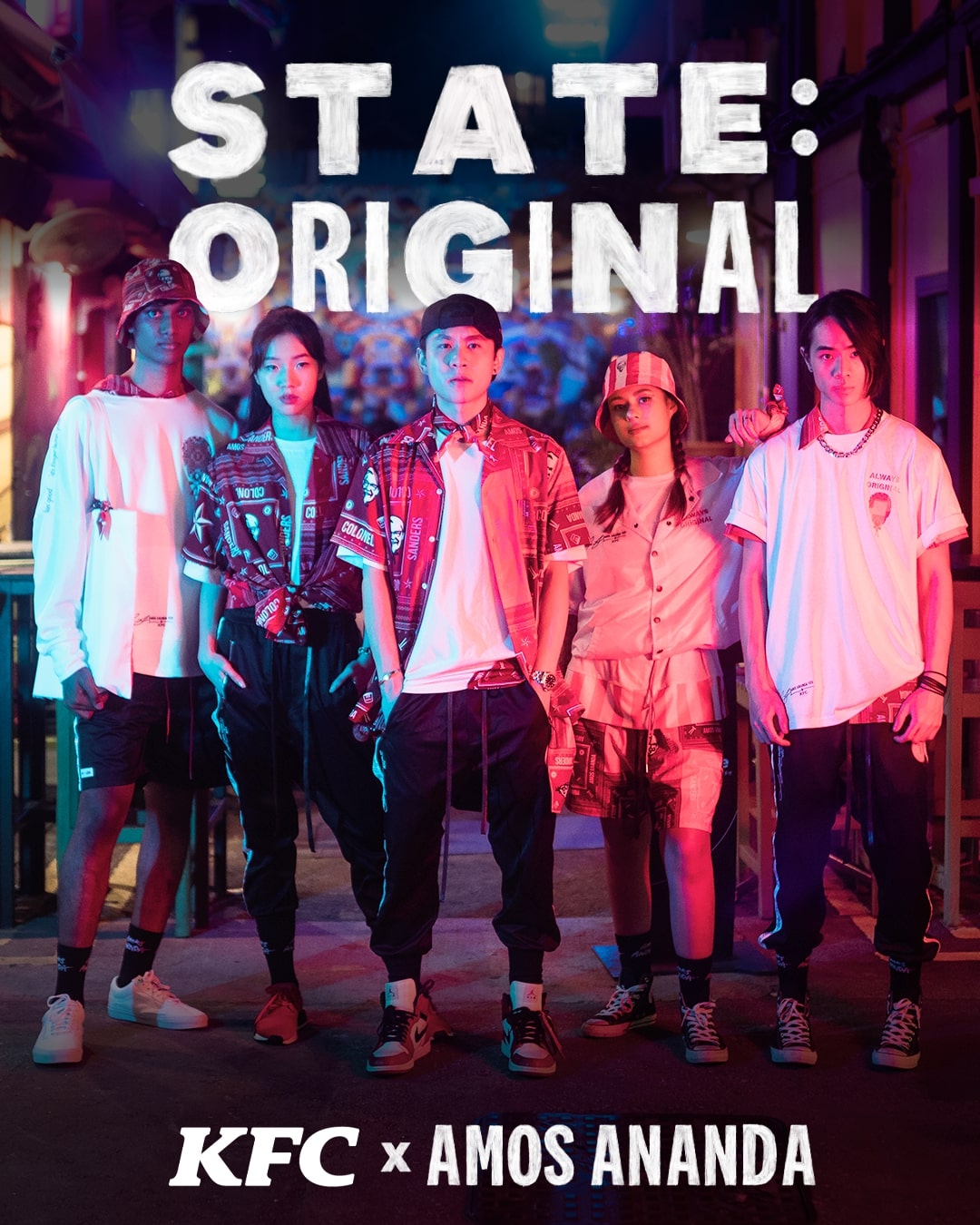 The exclusive streetwear collection, “STATE: Original”, features 11 limited edition pieces of apparel and accessories. It showcases Amos Yeo’s take on the fast-food chain and his interpretation of “the original state of self”.

The Colonel Sanders Hawaiian Shirt will have heads turning as it is not every day you see a shirt that features KFC’s iconic mascot. It is decked mostly in red and white motifs of Colonel Sanders’ bow tie, KFC’s signature chicken bucket, and a round symbol with the number 11. It also has words that read “Colonel Sanders” and “Amos Ananda”.

To help you achieve that hip, street look, switch things up by pairing it with a plain T-shirt and tying the ends of the shirt into a knot. 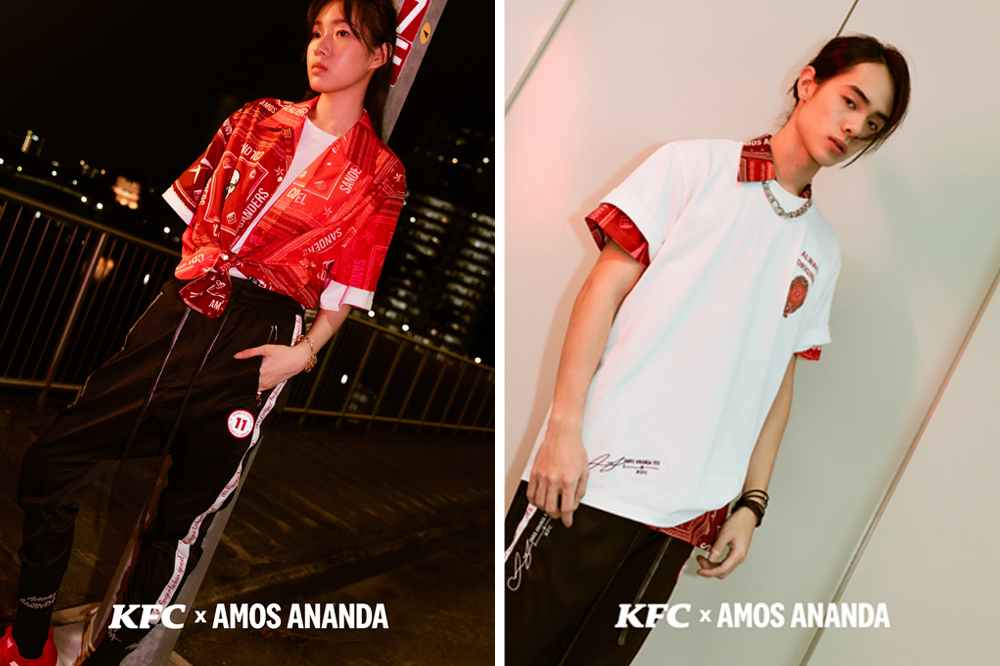 On the other hand, you can tone things down by wearing it beneath a white t-shirt. That way, the special Colonel Sanders print peeks out through the collar and sleeves without making a loud fashion statement.

At first glance, this Asymmetric Colonel Sanders Shirt looks like a basic white T-shirt. However, the extended Colonel Sanders print fabric on the bottom left will make you realise otherwise. 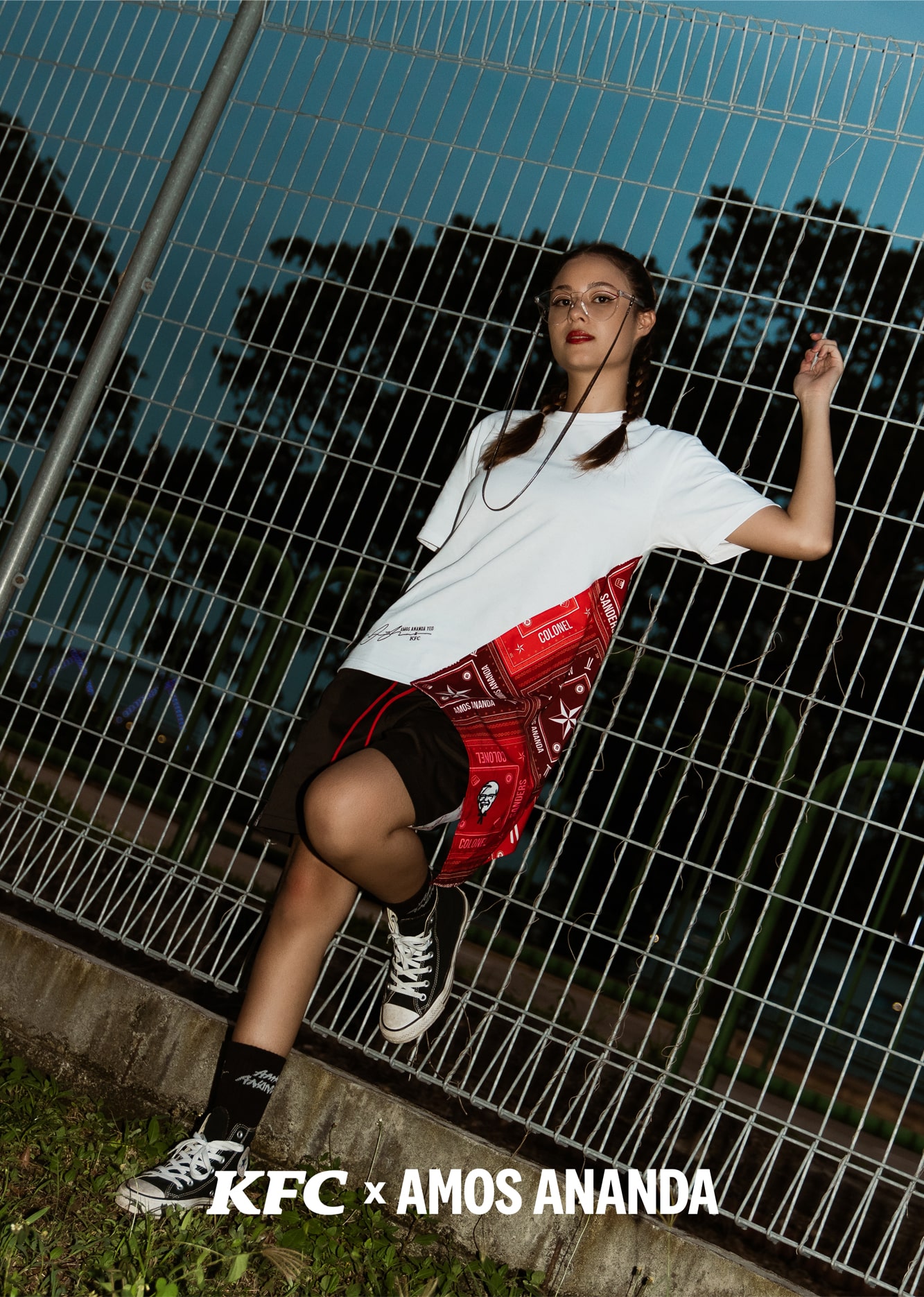 The extra fabric adds a quirky feature, transforming it into a not-so-basic top. 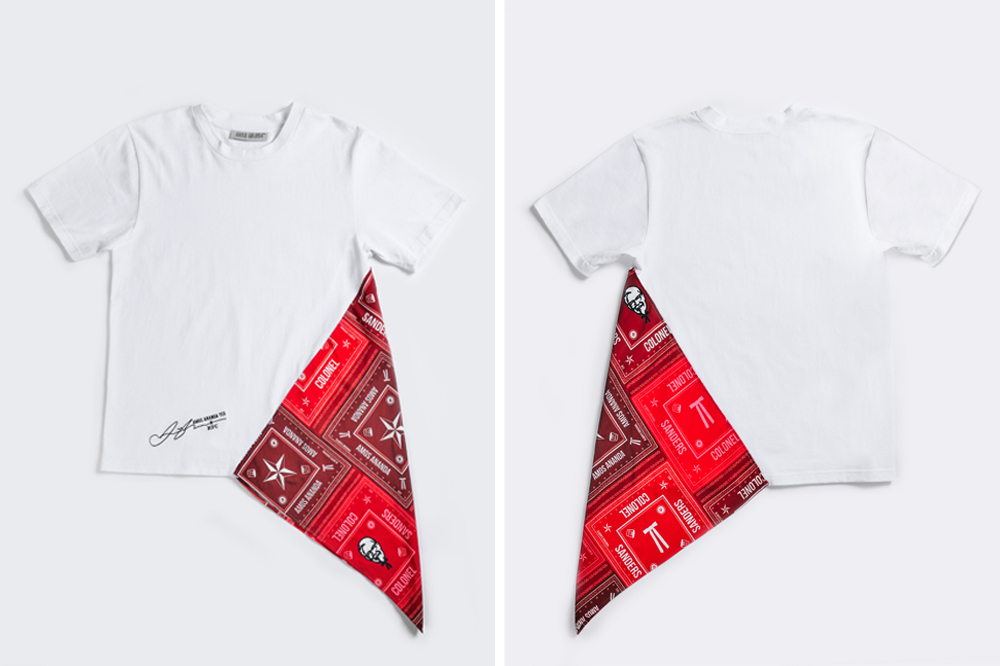 The Always Original Tee with Reflective Patch is a white T-shirt with red and white patterns at the bottom, reminding us of a typical KFC chicken bucket. On the top left, you will notice the reflective patch that reads “Herbs & Spices” and the number 11. At the back, it also has the tagline of KFC’s branding, “Always Original”. 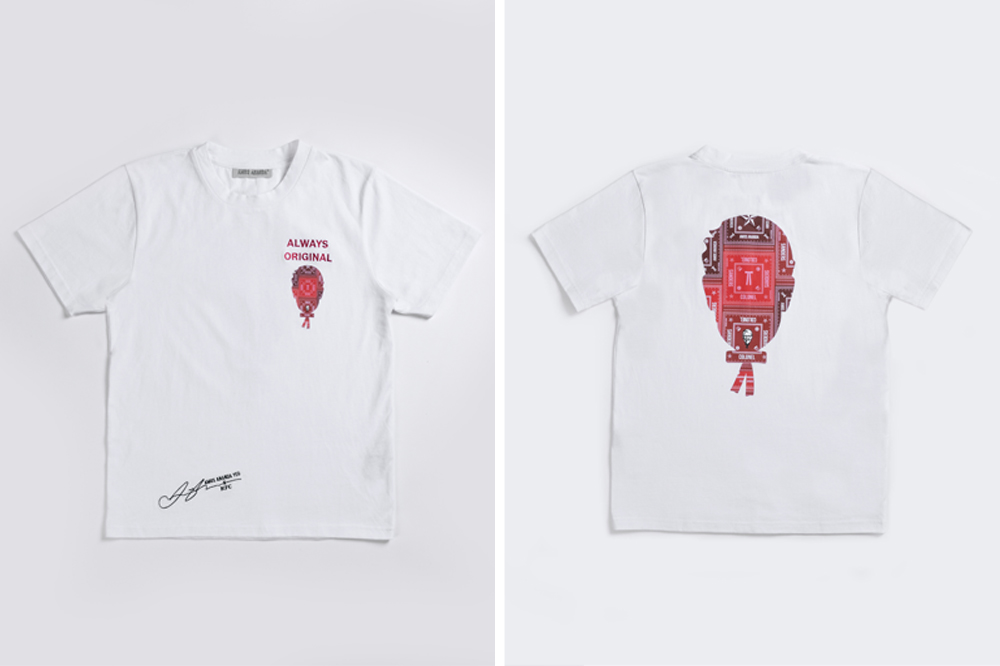 There is also a larger version of it at the back of the T-shirt.

While sweater weather is not common in Singapore, there are days when we find ourselves shivering under the aircon at work or in school. Keep yourself warm with this Colonel Sanders Graphic Hoodie that comes with a kangaroo pocket. The KFC’s slogan “It’s finger lickin’ good” is seen repeated on the sleeves of the hoodie. Plus, the hood stands out as it is made from the fabric with the special Colonel Sanders print. 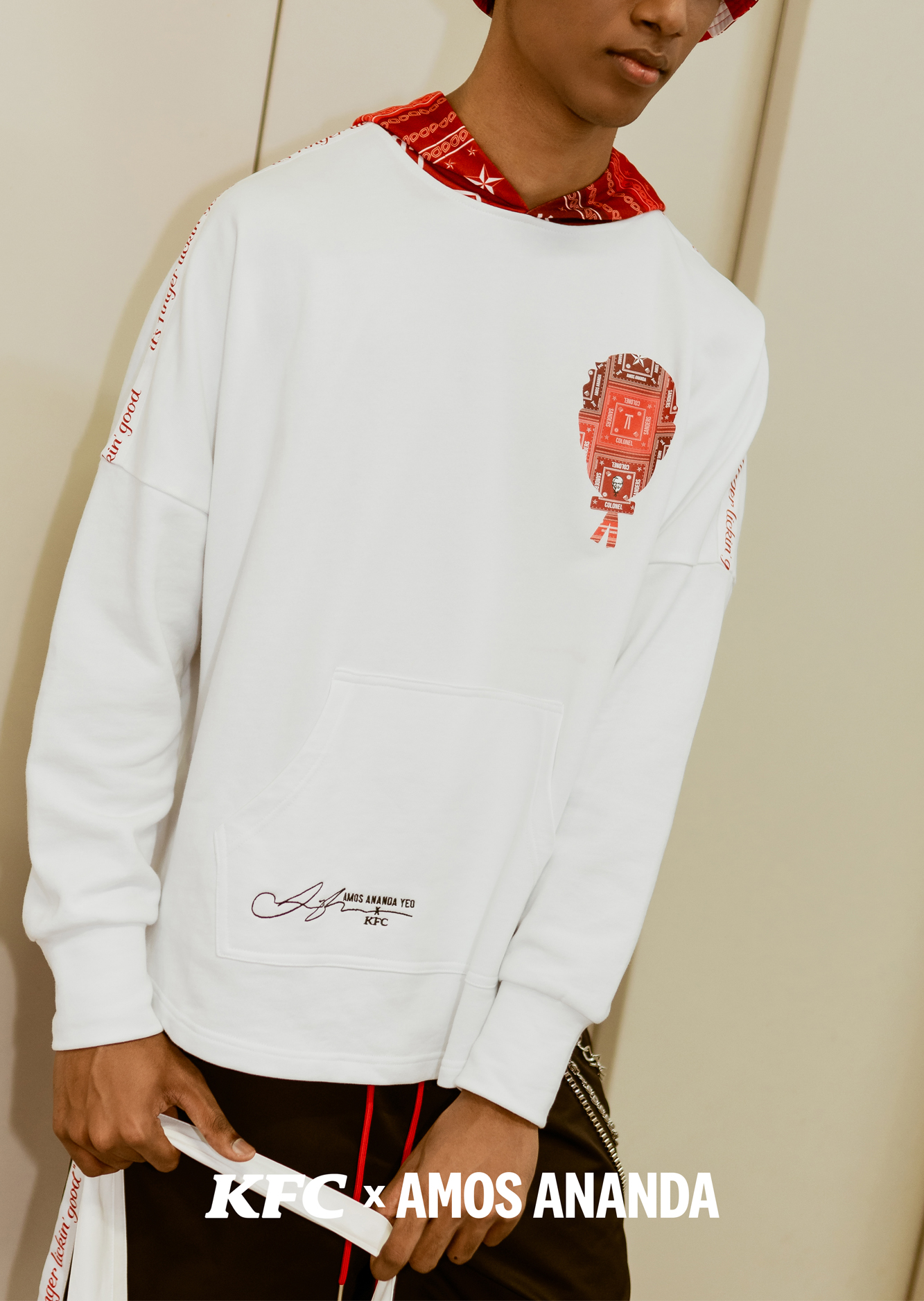 At the front, you will find your eyes drawn to the Colonel Sanders icon on the top left of the hoodie.

Get ready to level up your #OOTD with this Always Original Coach Jacket. It comes with several fashion points ‒ “it’s finger lickin’ good” slogan on the right sleeve, a side pocket with a zip on the left sleeve, and a large Colonel Sanders print at the back. You can get creative with the styling as the jacket comes with drawstrings that allow you to tighten it. If you plan on adjusting the length, you can do so by folding the ends and tightening the drawstring before tucking them in.

Who says you can’t look stylish with activewear? This Jogger Pants with Reflective Patch comes in black and is lined with KFC’s “it’s finger lickin’ good” slogan on the sides. The zippered pockets at the front allow you to store your belongings and there is another one at the back too. This Jogger Pants with Reflective Patch retails at $79.90.

If you are not a fan of pants because of Singapore’s sweltering weather, this Black Shorts might interest you more. The red drawstring stands out from the black apparel and KFC’s “It’s finger lickin’ good” slogan makes an appearance once again on the sides.

There are also pockets on both sides and another 2 at the back.

You can get comfy with this Red Colonel Sanders Shorts that is great for a casual outfit or even on days to just nua at home. Not only does it come in the Colonel Sanders print, it also has a black drawstring that allows you to adjust the tightness of the waistband.

This Signature Reversible Bucket Hat is a versatile accessory with 2 different designs in one item, in case you get bored easily.

The first design has vertical colour patterns of red and white with the embroidery of Colonel Sanders in the middle. Once you flip the bucket hat inside out, the special Colonel Sanders print found in the streetwear collection is revealed. Depending on how you want to experiment with your look, this is a great way to play with colours and patterns.

It features a simple design with the “Always Original” wordings and a circular print similar to the reflective patches of other apparel found in the collection. Turning the tote bag around, you will also notice KFC’s signature red and white stripes. On the strap, there is also a piece of the Colonel Sanders pattern print cloth tied to it.

Whether you’re heading out for an errand run or simply looking for a bag to carry your essentials, this Always Original Tote Bag goes perfectly with your outfit.

You can purchase the exclusive KFC x AMOS ANANDA streetwear capsule collection starting from 9 August on Shopee’s official KFC Store. In addition to the National Day celebrations, KFC and Shopee will also be having food deals starting from $0.80 from 1 to 9 August 2021 available on Shopee.

All images courtesy of KFC Singapore.