Unlike the Singapore Grand Prix or the opening of a new Don Don Donki outlet, beauty pageants might not incite excitement among Singaporeans as they once did many years ago. That was until a year ago when Nandita Banna, our Miss Universe Singapore 2021, made history by finishing Top 16 in Miss Universe 2021.

As it was 34 years since a Singaporean made it to the semi-finals of an international beauty pageant, we started to believe once again that we could compete on a global level.

From a recent chat with us on an episode of Ask Zula, the 22-year-old university student, model, and pageant winner shared with us her experiences – from pageant misconceptions to her struggles with xenophobia in Singapore.

How she got into modelling 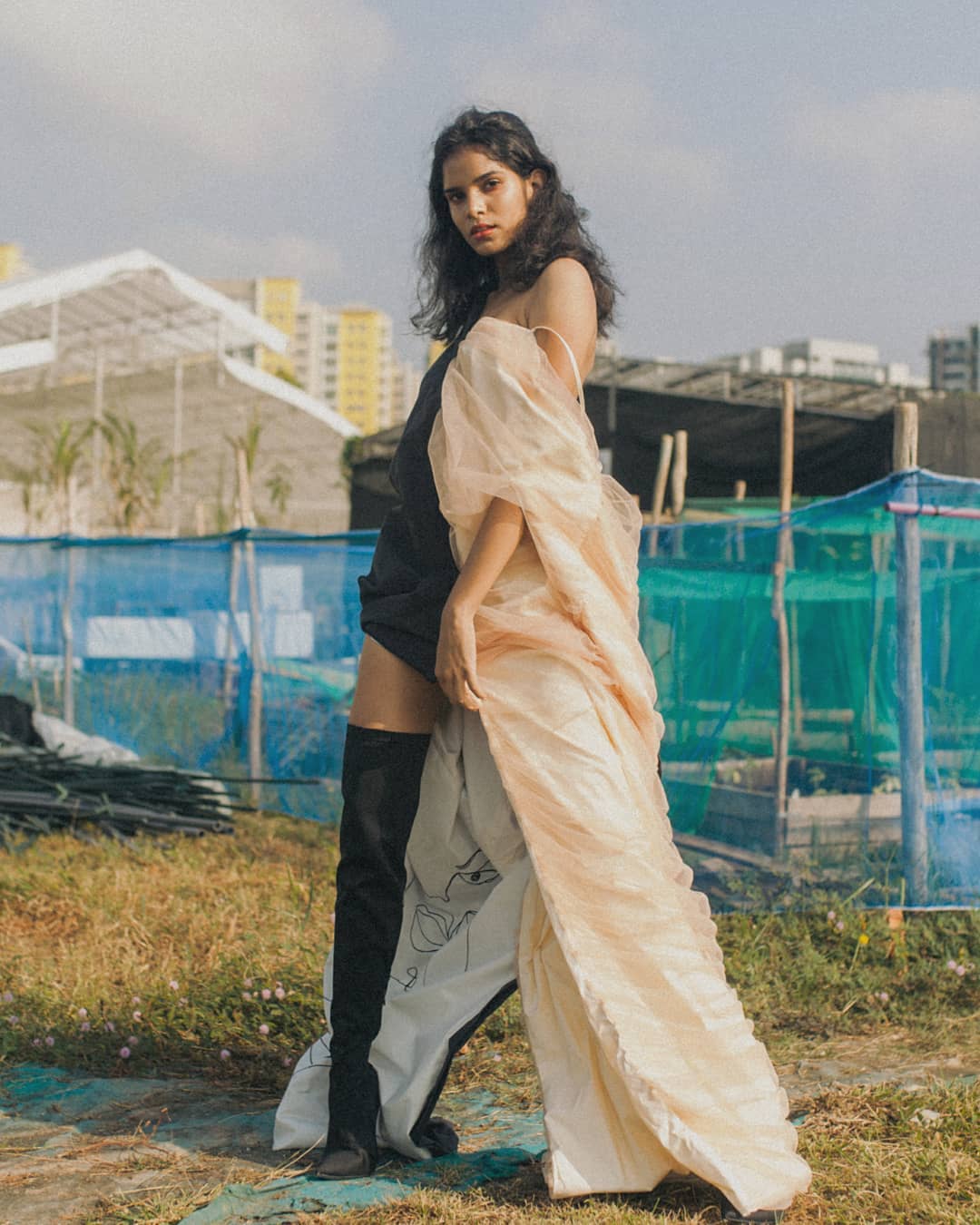 Before we dive into how Nandita became a pageant winner, let’s throwback to when she was in junior college ‒ a pivotal moment when she “debuted” as a model for the first time by volunteering in a student-run fashion show.

The short modelling experience allowed Nandita to realise her interest in the field, and she shared her enjoyment in “showcasing things without having to use words”. Despite it being a challenging task, modelling was Nandita’s newfound escape from reality especially when she was stressed about school.

Later on as a first-year university student, Nandita signed with her friend’s modelling agency which opened the door to opportunities for her.

“I was excited and nervous at the same time since I wondered who would book me,” she recalled. 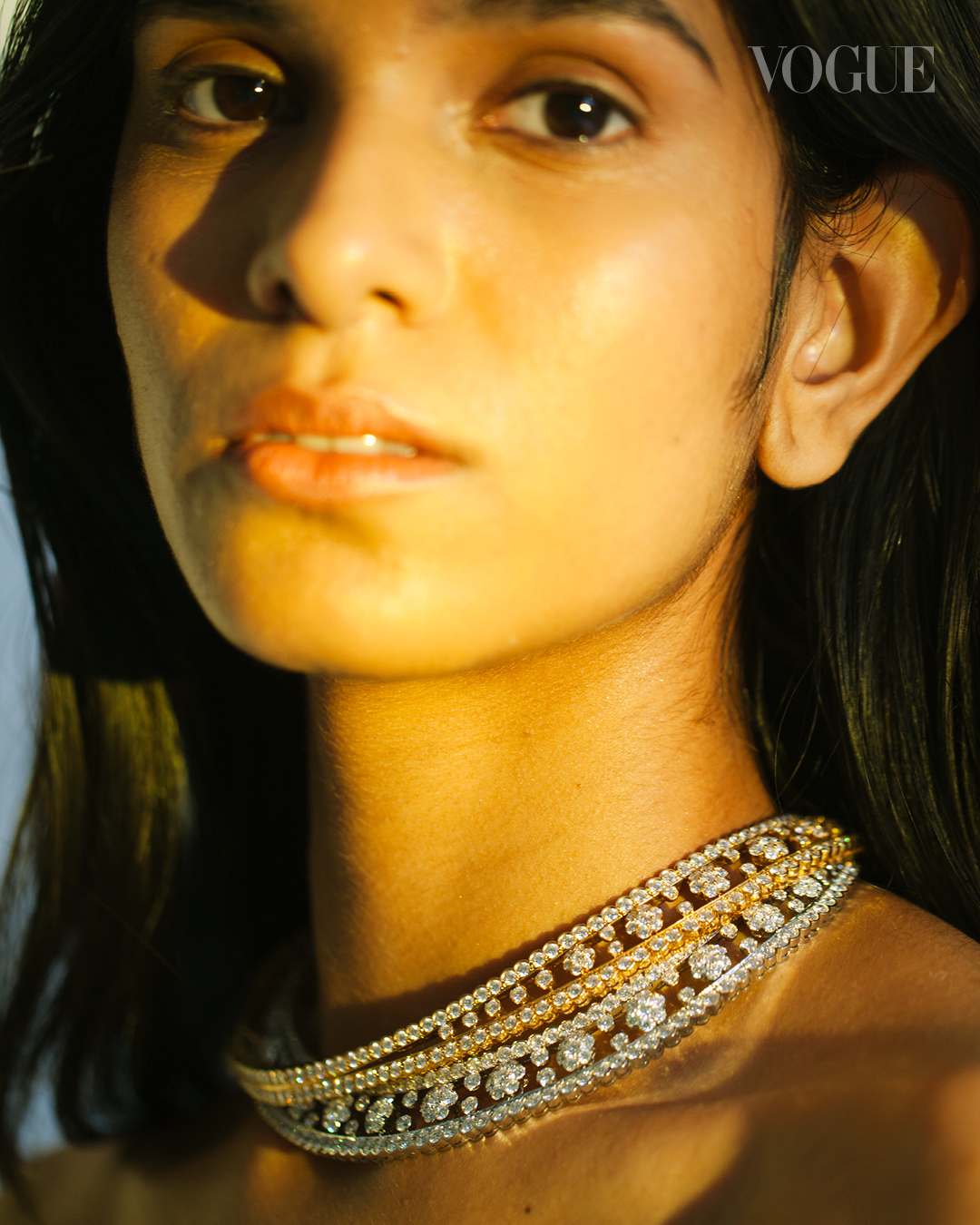 To Nandita’s disbelief, her first professional shoot as a model was booked by Vogue Singapore. Yes, the Vogue Singapore. The gig was definitely a step up from her usual shoots in school or with small brands, and she couldn’t hide her joy about the rare opportunity.

Things continued to work in Nandita’s way subsequently ‒ she debuted on the runway via a virtual fashion show with Louis Vuitton.

“I never saw myself modelling for all these big brands, and these experiences gave me a lot of exposure to very important people in the industry,” Nandita shared.

Among those important people she met, the show director of the Louis Vuitton virtual show was a game changer for Nandita. He saw and acknowledged her potential, giving her the confidence that she needed to believe in herself, and later even encouraged her to join the Miss Universe Singapore pageant. 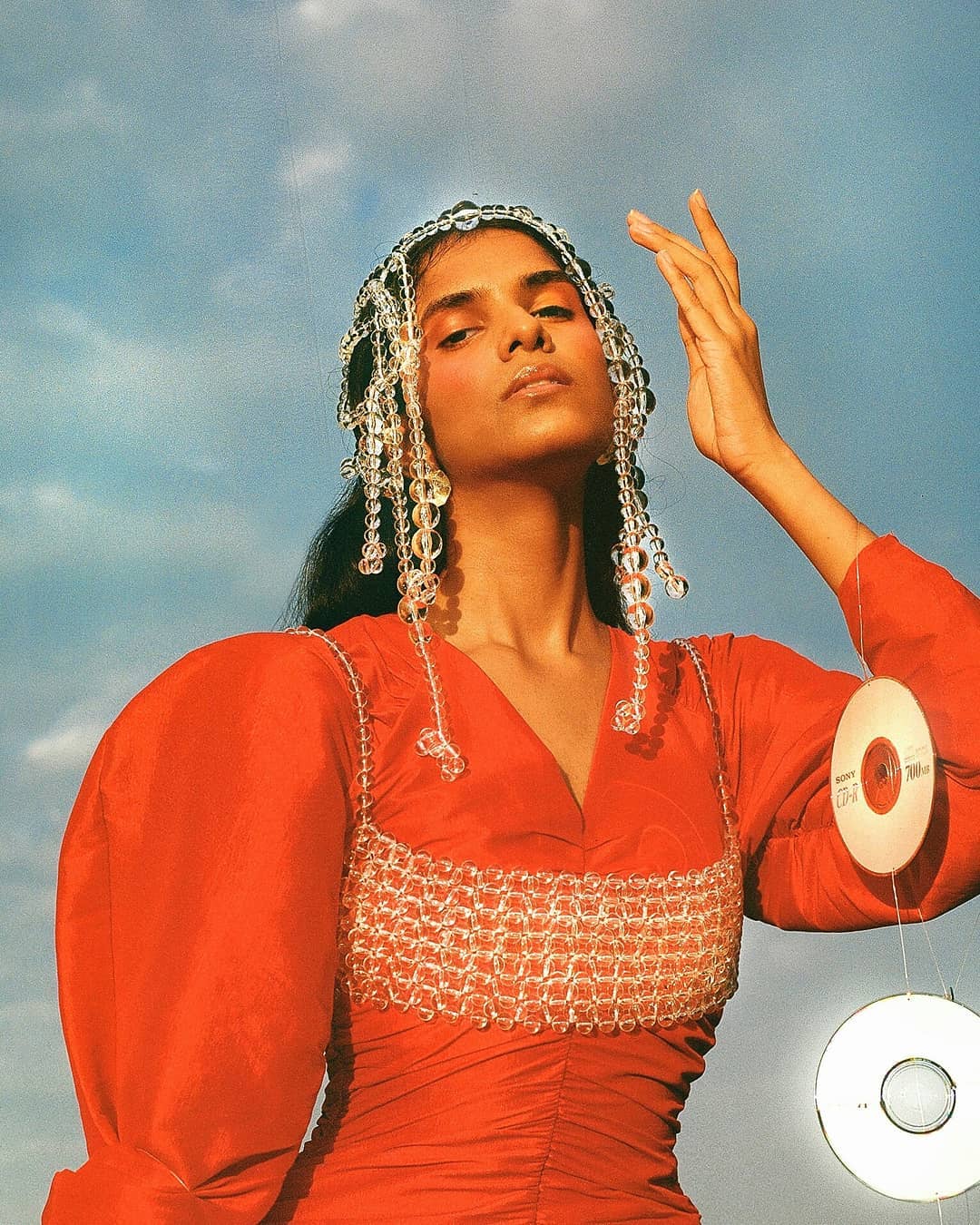 Despite also receiving support from others like her manager to give Miss Universe Singapore 2021 a shot, Nandita was still hesitant about putting herself out there.

“As someone who overthinks, I doubted myself and wondered if I was up for this beauty pageant,” Nandita revealed. “I was afraid to step out of my comfort zone, and was even worried about what others would think of me.”

The idea of having a perfect image was rooted deeply in Nandita, and she wanted others to see her as a successful model who was also good in her studies. Yet, because of such worries, she spiralled deeper, even imagining what others would think if she failed to do well during the pageant.

“The only thing I could control was myself, and I basically convinced myself to get out of an overthinking situation,” Nandita explained.

She eventually signed up as a participant, and later realised during the beauty pageant that it wasn’t all bad and that her initial paranoia was unnecessary.

“I didn’t stress out and truly enjoyed the entire process,” Nandita shared. “I kept telling myself to not overthink so I wouldn’t spiral like before, and to stop comparing myself to others who had more followers and engagement on social media.”

While it was thankfully a positive experience for Nandita, she had a new worry ‒ breaking it to her parents that she made it to the Top 8 of Miss Universe Singapore 2021.

Her parents reaction to her joining and eventually winning the pageant 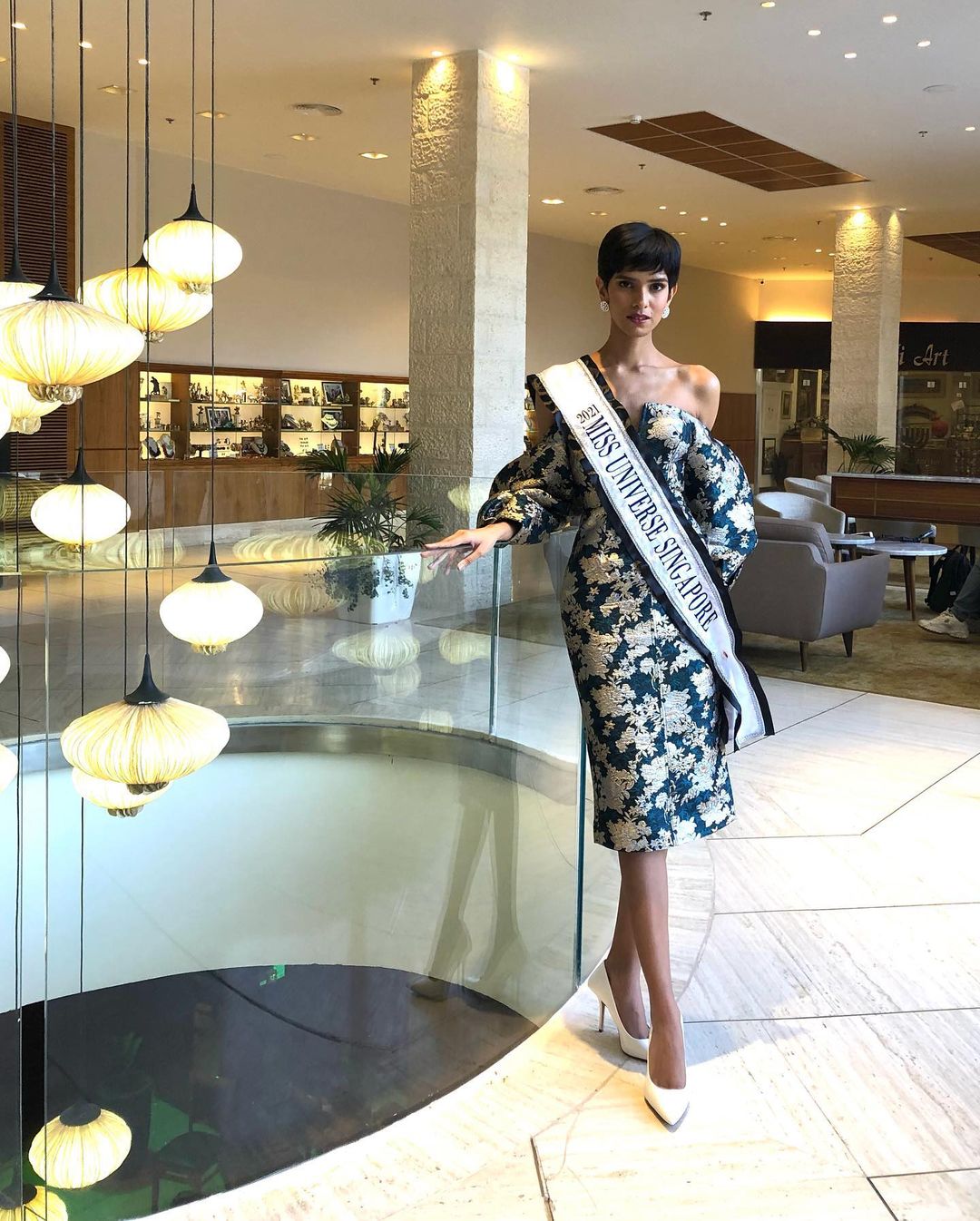 Most parents would want their children to focus on school, and needless to say, Nandita’s parents were the same. Her parents were not the most supportive when she first entered modelling as they were worried that her side hustle would affect her grades. From small photoshoots to being in the public eye on a large scale, Nandita wasn’t quite sure how her parents would react.

When she first shared the news with her mother, she was expecting some resistance from her. However, it was nothing like what Nandita imagined.

“My mother was pretty chill and she told me to just go ahead,” Nandita recalled. “She said “You’re 21, you do you”.”

Her father’s reaction was also surprising to Nandita ‒ as someone who never understood beauty pageants, he ended up being the one who was much more excited than Nandita herself.

Little did Nandita imagine that the whole process would bring her family closer than before.

On days when she returned home late because of practices, her parents cared for her more and made sure that she had a proper meal before she headed to bed.

Nandita also recounts how her father cried after learning that she had won the title of Miss Universe Singapore 2021. As she was outside when the results were announced, her mother was the one who conveyed the news.

“I was so shocked to hear about it because I knew my father as a strong and stoic person, someone who doesn’t easily show his emotions,” Nandita explained.

After returning home, she had a bonding session with her father, and realised that she scored more than just a title that night ‒ she also learned about the immeasurable amount of love her family has for her.

How winning changed her outlook on social media and life Nandita with her friends made during Miss Universe 2021
Source

After bagging the title of Miss Universe Singapore 2021, Nandita competed against winners from other countries in the Miss Universe 2021 beauty pageant which was held in Israel.

Being in such a large–scale competition was no doubt daunting to anyone, and to better prepare herself mentally, Nandita checked out her competitors by “stalking” them on Instagram.

Initially, she was intimated by the “perfect” image the girls had as all of them looked “gorgeous with flawless skin and smooth hair”. But after meeting them IRL, her impressions of them totally changed. In a good way, of course.

“It was interesting to learn that they are so different from what I’ve seen on their social media,” Nandita explained. “Many times, their images were curated by their PR team.”

The enlightenment allowed Nandita to come to terms that she shouldn’t “take social media too seriously” and there was no need for her to put on a facade just to portray a “perfect” image of herself. The idea of having an impeccable social media presence no longer bothered her, and she decided to just be herself.

“Every successful person has their own personality and the real way to do so is to be authentic,” Nandita shared. “After all, people can tell when you’re fake.” 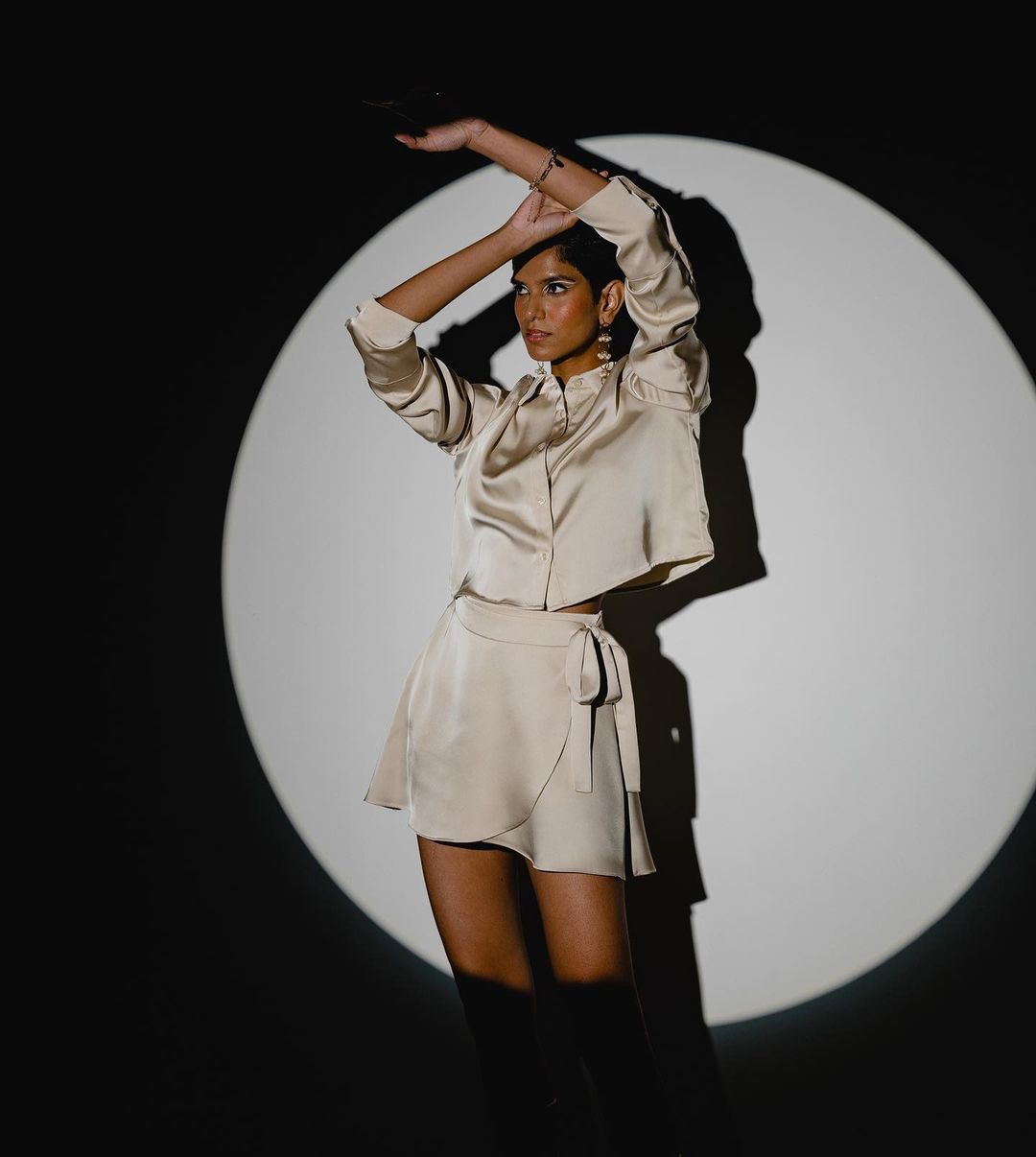 Other than this memorable lesson, Nandita also picked up more about discipline and independence during the two weeks of preparations that led up to the Miss Universe 2021 finals.

“There was no one to help me once I landed in Israel,” Nandita revealed. “I had to do my own hair and makeup as there were only 10 makeup artists assigned to help us 80 girls.”

As a strategic move, and also to save time on beauty preparations, Nandita went all out and chopped off her thick, long hair. Since she no longer needed to curl or straighten her hair like other girls, she was able to catch more sleep even if it was just 10 minutes.

It turned out that her decision to rock a pixie hairstyle proved to be fruitful ‒ she stood out with a refreshed image and made it to the Top 16 of Miss Universe 2021.

“I had goosebumps when my name was called out,” Nandita recalled. “And I felt really thankful to represent Singapore as I was initially insecure because of the mean, xenophobic comments that came from some Singaporeans.”

Nandita’s concern was understandable as after she was announced as Miss Universe Singapore 2021, not everyone was excited over the fact that she would be representing Singapore. Her parents were immigrants from India, and some felt that she didn’t suit the “beauty standards” and weren’t accepting of her roots.

However, none of those comments mattered to Nandita as she realised there was no “right” person who could represent our country.

“Singapore is a big melting pot with many different cultures, so it is impossible to define our country’s beauty standards,” Nandita shared. 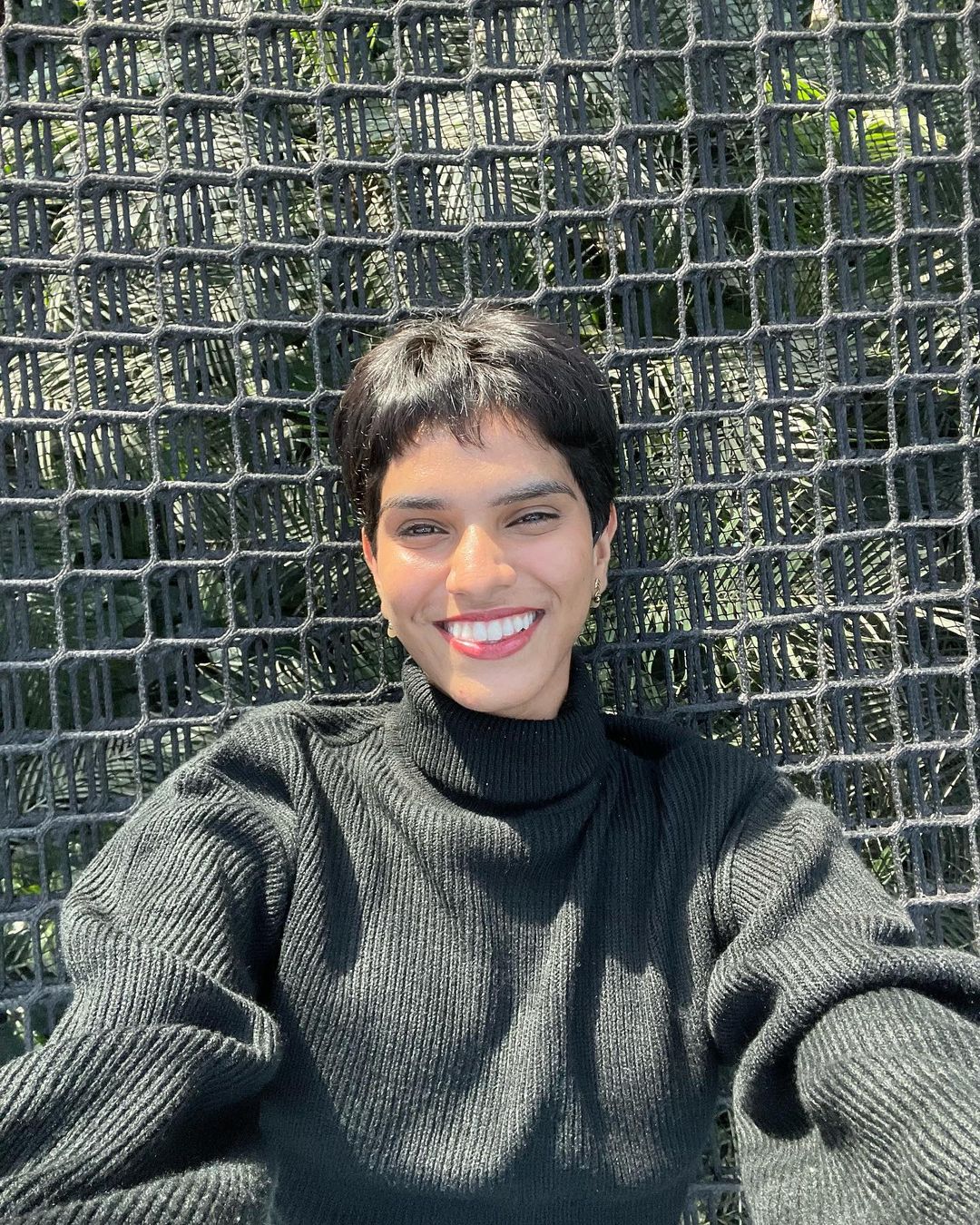 From being crowned Miss Universe Singapore 2021 to returning home as a Top 16 finalist in Miss Universe 2021, Nandita went through a life-changing journey. It’s safe to say that she’s no longer the same girl who used to have misconceptions about beauty pageants.

“I admit to being someone who used to think that beauty pageants are just pretty girls doing a fashion show,” Nandita confessed. “But there is so much more to it, such as the hard work that went behind the scenes, and the effort each participant put in to deliver in front of the audience.”

Addressing the stereotype of how most participants were professional models, Nandita mentioned that she was only one of the few that have had modelling experience. It might come to some as a surprise but the rest had occupations like football coaches and teachers.

This shows that anyone can join a beauty pageant as long as they are confident about themselves.

“The definition of beauty is changing, and the Singapore pageant is trying to send the message that beauty is more about who you are and your personality,” Nandita explained. “There isn’t a fixed beauty standard and organisers are looking for a person with the whole package.”

Besides changing the perspectives people have on beauty pageants, Nandita believes that the competition also empowers females.

Since every stage of the beauty pageant acts as a challenge to push the participants further they will feel confident and develop skills to better themselves in the future. Instead of viewing beauty pageants as “just a show”, viewers should also see it as a platform where participants get to become a better-improved version of themselves.

Overall thoughts and plans for her future 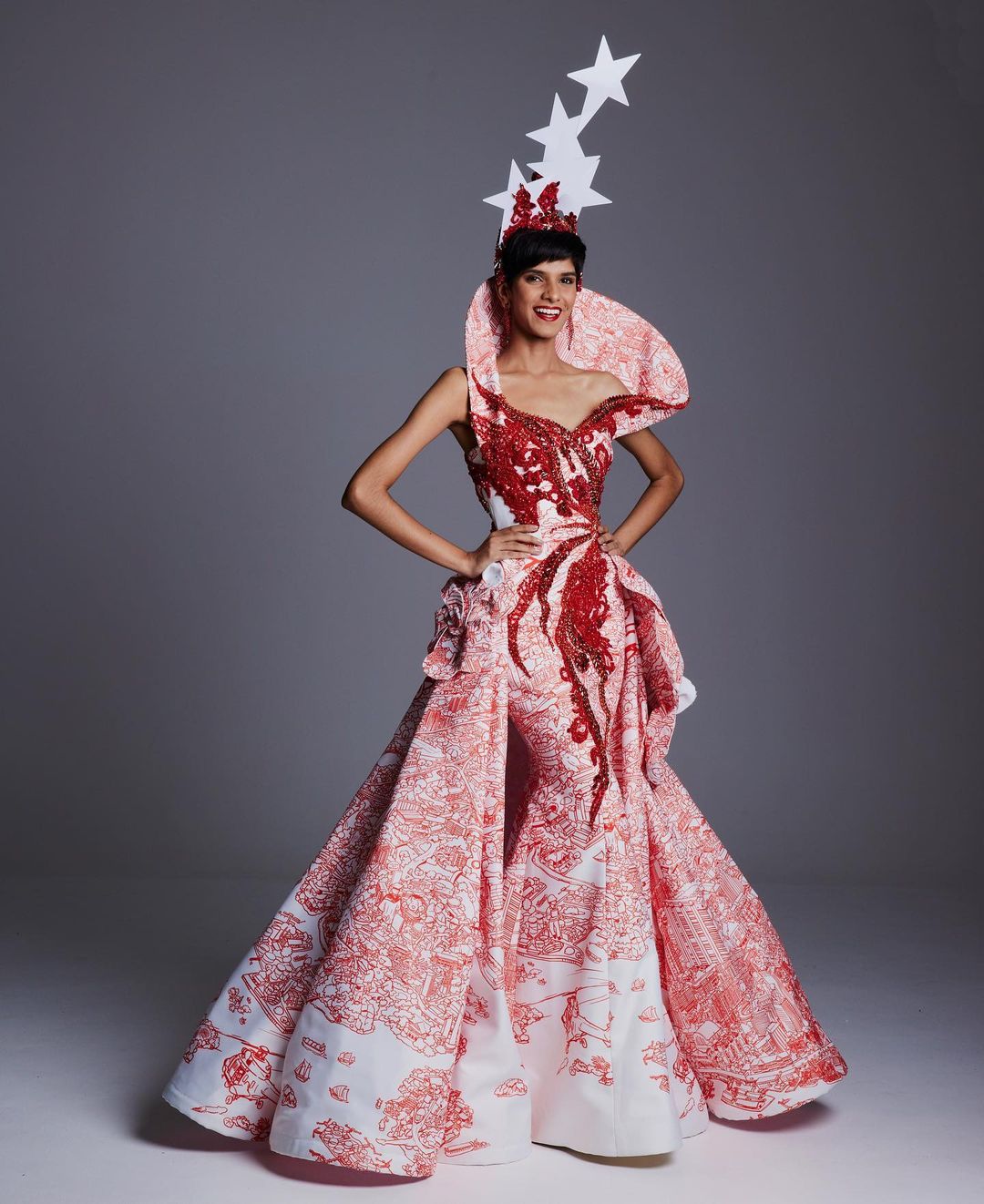 From this whirlwind experience, Nandita hopes that she will inspire other Singaporean females to try out for Miss Universe Singapore.

More importantly, she also wishes that more people would understand that a beauty pageant is not just a “frivolous thing that people do” but rather, a meaningful and life-changing experience.

“Maybe in the future, we might even see Singaporeans making it to the Top 10 or even Top 8 of Miss Universe,” Nandita mentioned. “Even if you don’t make it to the top, you will still learn a lot from the entire journey.”

As Nandita hands over the crown to the next reigning queen soon, she plans to finish her undergraduate studies and balance her time with modelling gigs – which we can’t wait to see more of.

Sometimes it is worth taking a leap of faith because you never know if you might end up walking down a life-changing path. Nandita’s story as Miss Universe Singapore 2021 shows that the best life experiences happen when we decide to step out of our comfort zone and give it our all.

If you’re curious to learn who will be crowned Miss Universe Singapore 2022, find out more about the finalists here.

18 Facts About Miss Universe Singapore 2021 Nandita Banna, Including Her Reluctance To Join Initially