Wendy Yam Is An Aquarist At S.E.A. Aquarium

On a scale of 1 to 10, how willing are you to dive into a tank filled with over 100 hungry sharks and feed them fish on a stick?

If you don’t have a death wish, you would probably nope the fuck out. However, for S.E.A. Aquarium aquarist Wendy Yam, it’s no big deal. Never mind that the sharks are at least 2m in length and bigger than the 25-year-old; Wendy is only 1.54m tall.

Like most, I would strongly prefer to keep my distance from these apex predators. To understand why Wendy has balls of steel when it comes to diving with sharks, I made a trip down to the aquarium. Shark about to eat a squid

No fear when diving with sharks

The Shark Seas exhibit contains big, powerful sharks such as sandbar, hammerhead and silvertip sharks. The obvious question is: why isn’t Wendy afraid though the animals she gives snacks to could easily rip her in half?

“We’ve all watched movies like Jaws, right? And they always show sharks as very ferocious animals. With a single drop of blood in the ocean, the sharks go crazy. Well, actually, that is not true. Maybe if it was fish blood or a piece of tuna in the water then definitely the sharks will get more active. ”

Turns out, sharks are picky eaters and like to eat fish; they have no desire for our blood. Not only are we hard to digest because of our bones, but we’re also not tasty enough for them.

“Well, I still dive into the exhibit when I’m having my period,” she sheepishly adds. 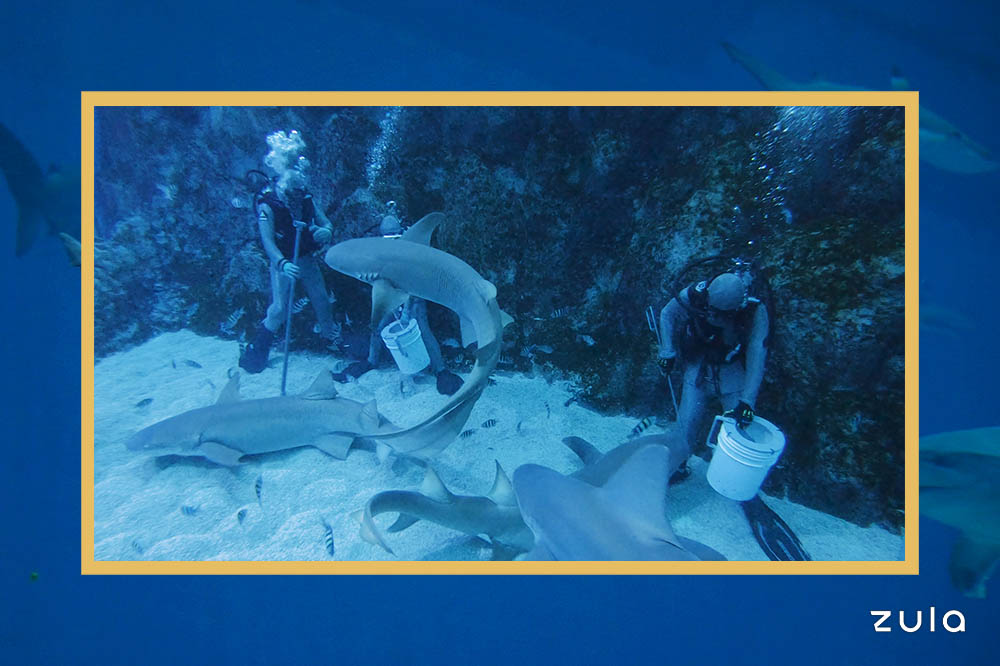 Though “there’s nothing to fear”, Wendy doesn’t scream “YOLO!” and jump head first into the Shark Seas exhibit.

Prior to each dive, aquarists don a chainmail suit, or ‘shark armour’, over their wetsuits. If a shark noms on a diver, its teeth will be hooked onto the suit’s chain links. This prevents the shark’s teeth from piercing through skin. “But of course we still have to respect them, we don’t just go down and touch any shark that we want. Every time I dive into the exhibit, I’m sharing the space with [the sharks]. I don’t own the space.”

Day in the life of an aquarist

On average, Wendy estimates the entire shark exhibit consumes 100kg of food. The sharks are fed fish such as Atlantic mackerel, large squid and selar fish, the fish typically served in nasi lemak.

From Tuesday through Sunday, the aquarium offers three sessions of Shark Encounter daily, where guests are able to enter an acrylic tube and feed the sharks. Feed is then thrown into the tank at the end of the day. Monday is a fasting day.

It’s only on Tuesdays and Thursdays that Wendy enters the shark tank to perform her scheduled dive feeds. 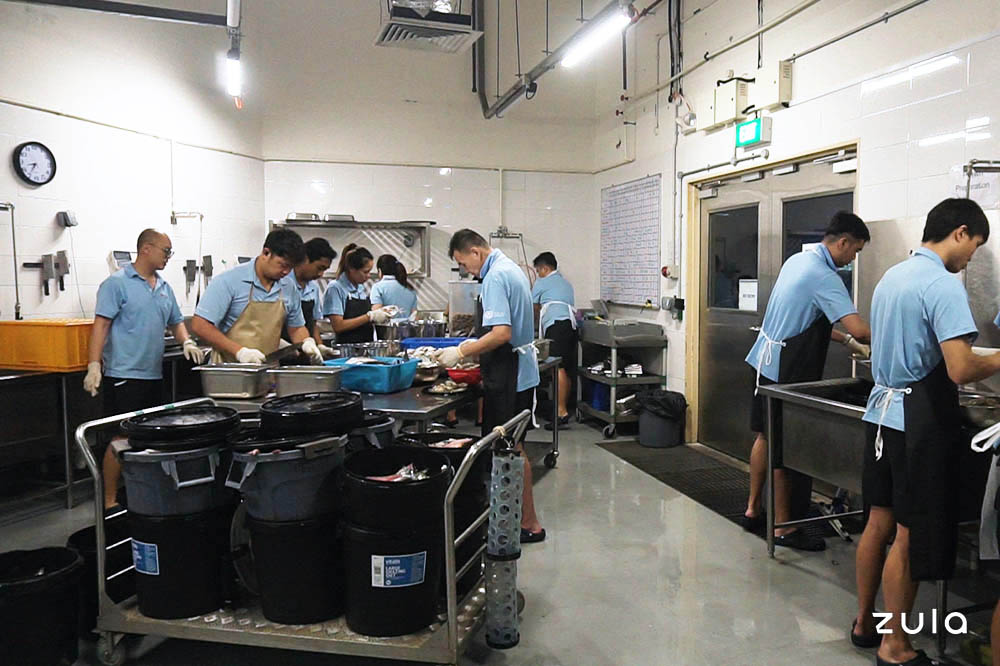 Meal prep for the shark gains

“I think a lot of my friends, even sometimes my family, think that I come here and just clean the fish tank,” Wendy laughs. “Actually, it’s a lot more than that lah.”

Currently, Wendy cares for the Shark Seas and Shipwreck exhibits. Like zookeepers, aquarists feed and maintain the exhibits. Aquarists are also involved in animal husbandry, enrichment, and the training and conditioning of the animals.

By the time work ends at 5.30pm, Wendy is ready to go home and pass out.

As Wendy brings me around the aquarium, she points at and gushes about the different sharks.

“My favourite shark is actually staying in the Shipwreck exhibit. Her name is Vanda. Vanda is a zebra shark (also known as leopard shark) that was born in the aquarium and I really like her because she’s this really gentle shark. She’ll come right up to you, she’ll just lie next to you when you’re doing maintenance. She’s just such a sweet soul.”

Listening to her go on, you would have never guessed just a few years ago, Wendy thought “fish was just fish”. 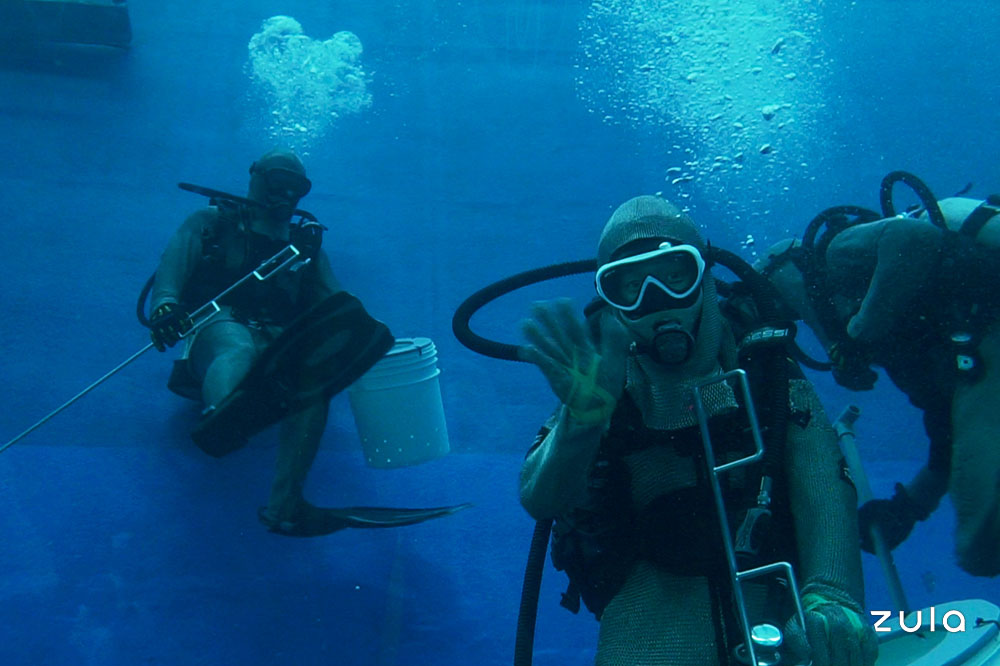 Prior to becoming an aquarist, Wendy had little experience with marine creatures. She was intending to become a vet and was pursuing her diploma in Veterinary Bioscience at Ngee Ann Polytechnic.

But she did an internship with the aquarium and was mentored by a passionate aquarist who showed her “a whole new world”. After graduation, she applied to the aquarium and has been with them for a year and a half since.

Apparently, all you need to be an aquarist is to have a dive certificate, passion for working with animals, and the ability to lift at least 15kg. 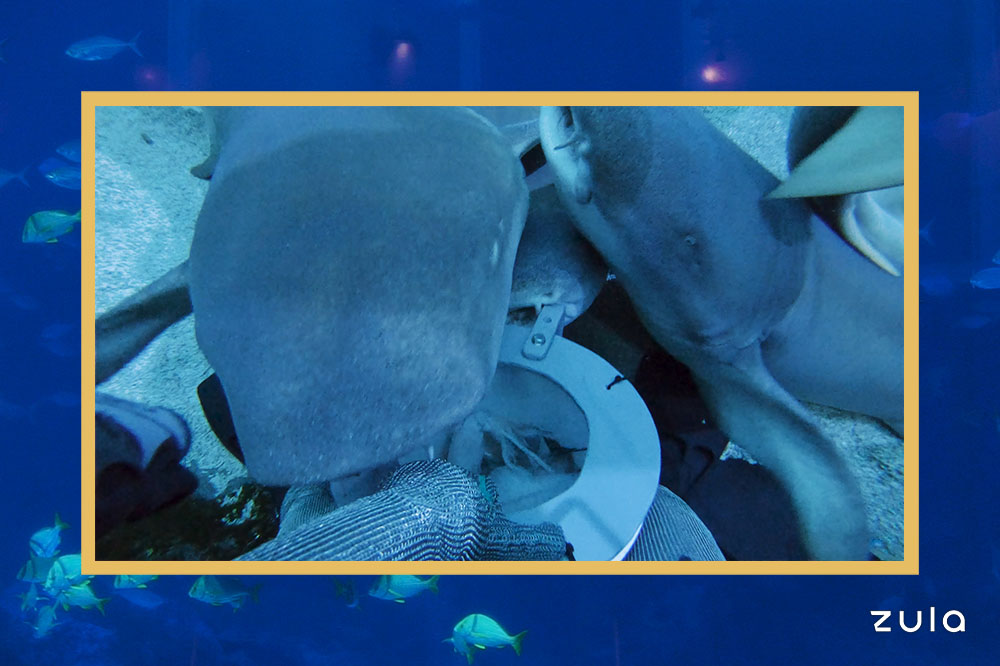 Nurse sharks who want the snaccs

Wendy Yam On Working At The S.E.A. Aquarium

It’s clear that Wendy has both a strong love and a healthy respect for marine creatures. She understands if you take the necessary precautions, there is nothing to be afraid of. We are all part of a wider ecosystem; life should be cherished and there should be balance.

“We have certain species which are vulnerable and I’ve worked with these animals and I see them thriving here. But in the wild it’s not the same. We all know that the world’s oceans are not very clean. Our coral reefs are dying and all that.”

Climate change is the most pressing issue of our time. Coral bleaching and mass extinctions in the current age of Anthropocene is proof. It doesn’t help that the animals are also affected by trash in the ocean.

Floating in the Pacific Ocean is the largest accumulation of ocean plastic in the world. A conservative estimate of its size is 700,000 square kilometres or about 970 times the size of Singapore. And it keeps growing. 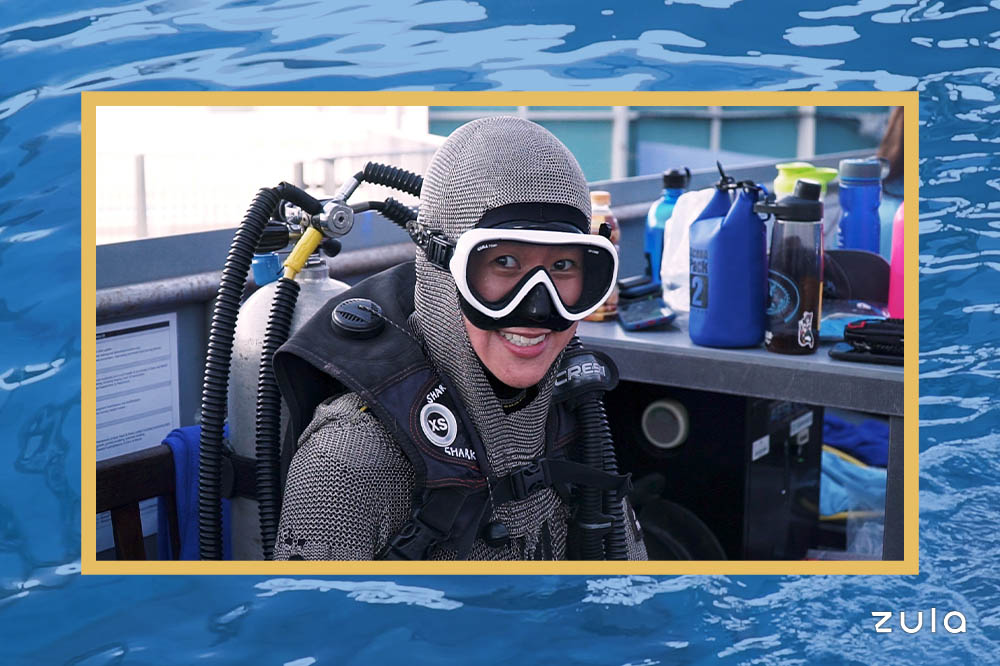 Wendy waiting for her turn to dive

“For me and for most of my colleagues working here, we’re all trying to do our part to protect our oceans by helping up with reef cleanups and other conservation efforts.

“I try not to use plastic straws, I try to reduce the use of plastic bags. And I try to nag at my family to do the same as well. I think as long as we all play our part, even if it’s just a small step, it might not seem much to us, but it makes a big difference to the sea animals.

“I think if I wasn’t an aquarist, I would still be studying to become a vet. Now that I’ve found this job, I definitely see myself staying in this line for a while. There’s definitely plenty more to learn, a lot of different animals to work with. And, of course, the best part of the job is when you see the animals happy in their habitat.”