“You caught me on a good day actually,” Chris Hong, a 22-year-old transgender musician, tells me. “This is the first time [I’ve worn] a white T-shirt since I was about 10.”

That may seem insignificant to most people, but for Chris, it’s a milestone. From his early teens to adulthood, Chris steered clear of white tees in a bid to conceal the chest binder he wore under his shirts.

That all changed when he went for top surgery a month ago. Over coffee, Chris shares why he decided to get top surgery and the struggles he faced along the way, tracing all the way back to his youth.

Since he was a child, Chris felt a disconnect between his gender identity and assigned sex at birth, which caused him a huge amount of discomfort and distress. This is a condition known as body dysphoria. 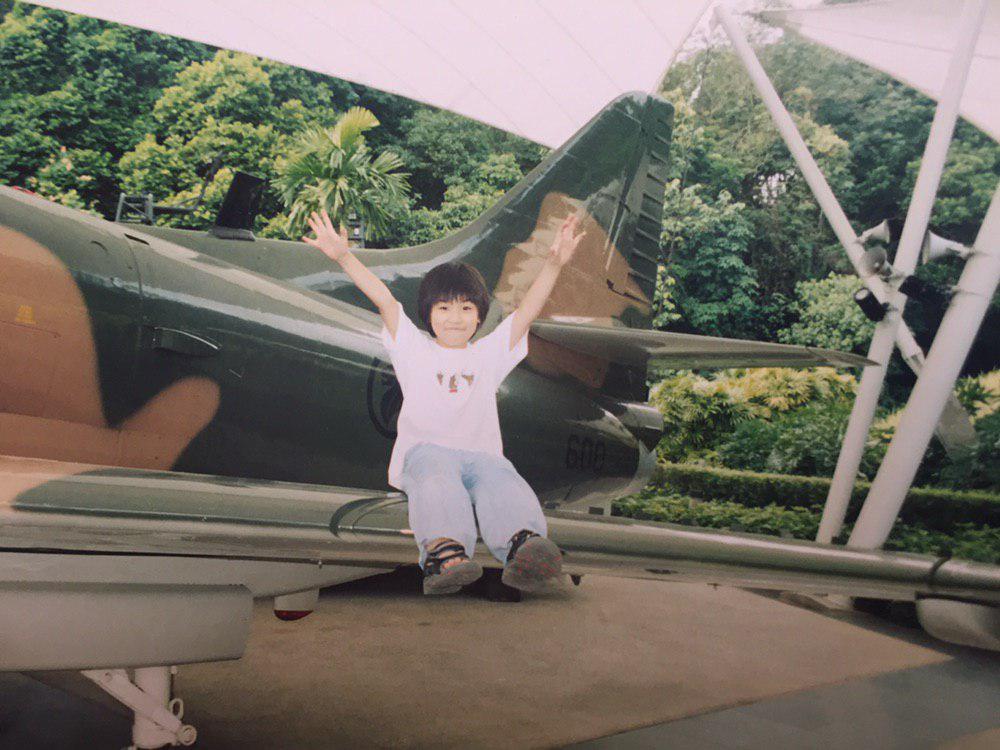 Chris had experienced body dysphoria since he was 7 or 8, long before he even knew of the term. “I never saw myself as female from the start, so it was very hard to look in the mirror,” he shares.

“My chest has been my biggest source of dysphoria for many years. My whole wardrobe is tailored so that I can wear shirts that hide my figure; something I can wear my binder under and not have it be seen,” Chris explains.

Wearing a chest binder for 8 years

Before Chris started developing breasts in secondary school, he had already started binding his chest to create a flatter appearance. “Seeing my [female] friends grow up and go through puberty, I was so paranoid that I would also have a chest. I wanted to make sure it never grew.”

“I remember buying my first proper binder when I was 17. It’s a singlet with a binder inside, so the binder can’t be seen. I was very happy with that but I wished it were a lot longer,” Chris recalls. The discomfort of wearing a chest binder eventually made Chris convert to stomach binders, which he bought from Ezbuy. 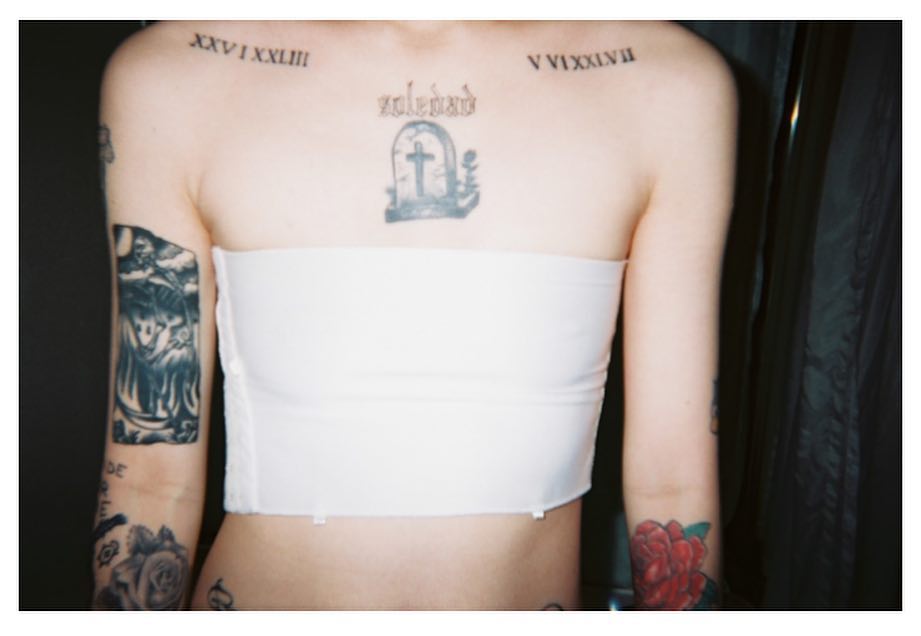 “They aren’t meant for chests,” Chris notes. “They aren’t made to expand as you breathe, so it’s a fixed size. Before I put on my binder, I have to take a really deep breath. I also used ACE bandages. You tighten it as much as you can and you clip it on. I remember making it so tight that the metal clips always broke.”

While it eased Chris into his appearance, the consistent use of a makeshift chest binder gave way to various health issues, such as “a decreased lung capacity [and a] smaller ribcage.” To hide his binder, he developed a slouch, which gradually led to back pain and scoliosis, a sideways curvature of the spine.

For as long as he could remember, Chris would make the same wish on every birthday and every 11:11 he encountered. “[I] wish that I had just been born the right gender and therefore avoid all the trouble and expenses of transitioning,” he wrote in an Instagram post.

When top surgery became a priority

When Chris realised he was transgender, it brought about a sense of liberation. He also identifies as non-binary, a spectrum of genders that don’t fall into the male or female category. Hence, Chris’ pronouns are ‘he/they’.

After he came out on Instagram in 2015, he started to look up surgeons who performed top surgery to gather information and their price lists. He read up on the different top surgery techniques to find out which would be the best for his chest.

Top surgery is the most common procedure performed on transgender female-to-male (FTM) individuals. It is designed to remove breast tissue for a flatter, male-looking chest, and there are several different techniques to achieve that.

He had saved up close to $10,000 from working full-time, but his journey to getting a top surgery came to a grinding halt when he hit his lowest point at the end of 2018. After battling bouts of depression, Chris became suicidal. “I decided I didn’t want to live much longer. I wanted to die before I turned 22,” he shares.

Chris flew overseas to meet with his friends and spent most of the money he had saved up, leaving him with around $3,000 in his bank account. While he was in the U.K., he met up with his best friend, and that’s when things turned around.

“We went to so many drag shows and visited queer spaces. After that trip, I realised I could be openly trans and queer. That was when I started to dig deep and think about what I wanted to do.”

Top surgery was right on top of Chris’ list.

Raising funds for the top surgery

Two weeks after his trip to the U.K., Chris emailed Kamol Cosmetic Hospital. Dr. Kamol Pansritum was on Chris’ list of top 5 surgeons and is based in Bangkok.

“The top surgery itself costs about $8,000, not including hospitalisation, checkups and accommodation,” Chris explains. “I gave myself 6 or 7 months to save up, so I booked my top surgery for 11 November—a very nice date.”

As a musician, Chris sings and plays the guitar during gigs. “I was constantly busy. I worked so many jobs and I had multiple bookings on the same day,” he said. However, he knew he needed a lot more help raising funds for the surgery. 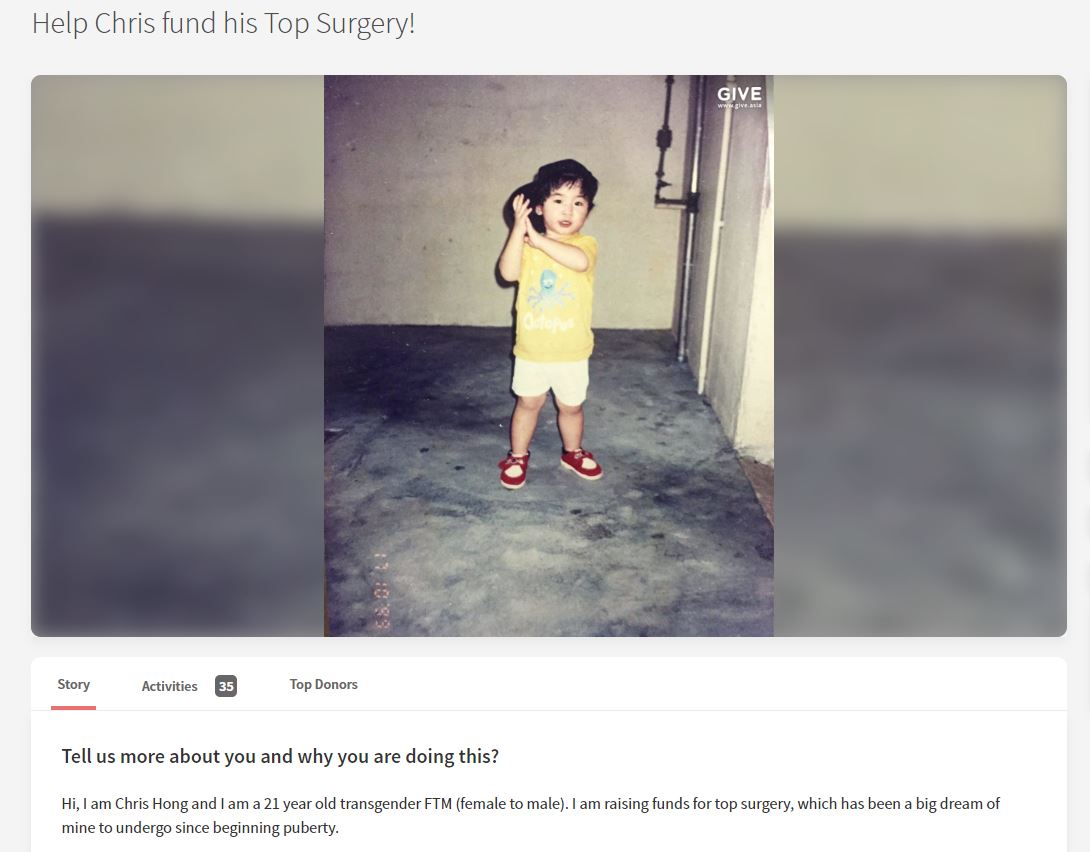 In May 2019, Chris found a crowdfunding site called GIVE.asia, but his campaign was declined on the grounds that his surgery wasn’t for a life-threatening disease. Chris protests, “I’ll admit that it’s not a disease, but that doesn’t mean it’s not life-threatening.”

A study showed that 1 in 4 pre-teens in the LGBT community are more likely to commit suicide due to psychological conflict and “how the world reacts to their identity”.

Chris proceeded to negotiate with one of the employees at GIVE.asia. “He allowed my campaign to be posted, but it would not be on the main website. Instead, it would be a private link that others can access,” he shares.

By November, he had managed to raise $5,101, supplementing the rest of the fees with the money he had saved.

When Daddy Becomes Mummy: Fanny Ler On Being A Transgender Parent In Singapore

Having a panic attack before his surgery

When he arrived at Kamol Cosmetic Hospital, anxiety washed over him. “I have a phobia of hospitals because every time I go there, nothing good ever happens. Being in one was very scary, but being the one to go for surgery was even scarier,” he expresses. 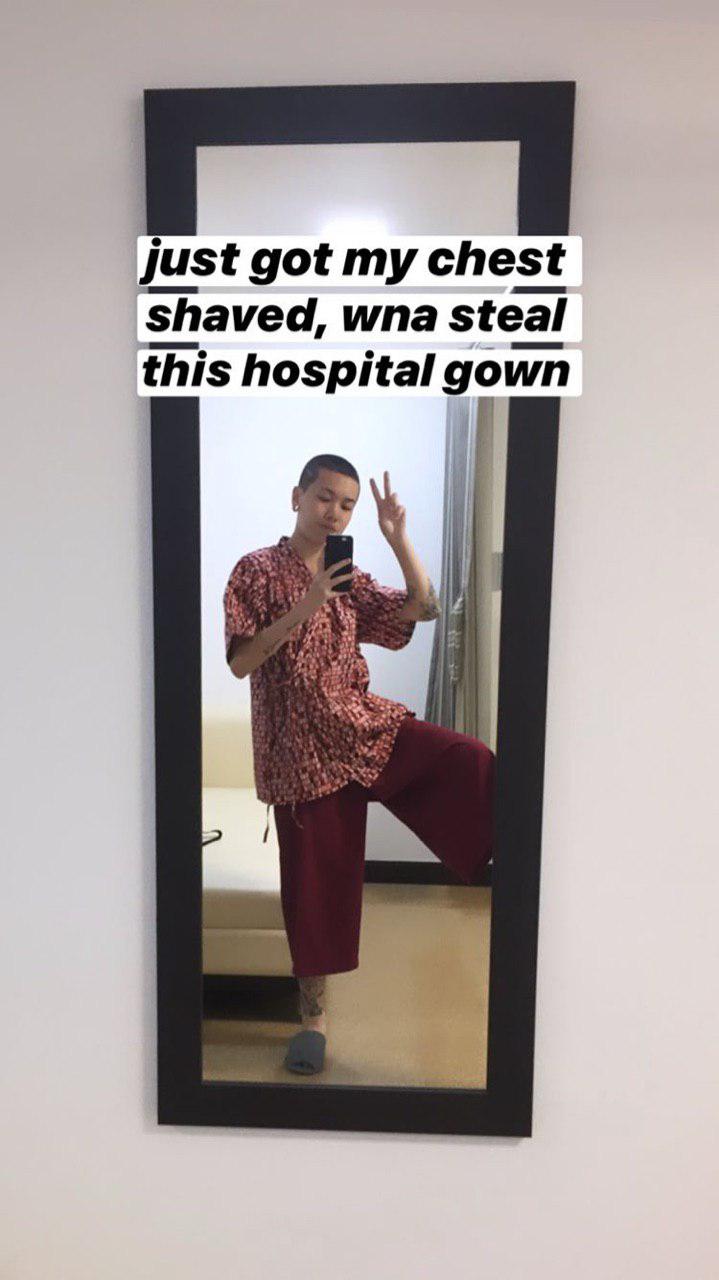 Snapping pictures before the surgery

Despite feeling the jitters, Chris was excited the day leading up to the surgery. “I was having fun taking pictures of myself in the ward and my friend came to visit, so everything was okay. That was until I was in the operating theatre,” he says.

With his arms strapped down to his sides, Chris started to have a panic attack. “When my BP (blood pressure) spiked, the nurses tried to calm me down. I tried to, but I couldn’t. I could hear the beeping of my heart rate, so I knew it was too fast. I knew something was wrong,” he recounts.

When he couldn’t maintain his composure, a nurse put a mask over his mouth and administered the anaesthesia in advance. “I felt one cold hit of air, and then I was out,” Chris remembers.

After the top surgery

After the 3-hour surgery, Chris woke up shivering. In the dark recovery room, all he could see was the green glow emitted from the ECG machine behind him. “I tried to sit up, and that was the biggest mistake. It was so fucking painful. I didn’t know I had [surgical] drains in,” Chris recalls. 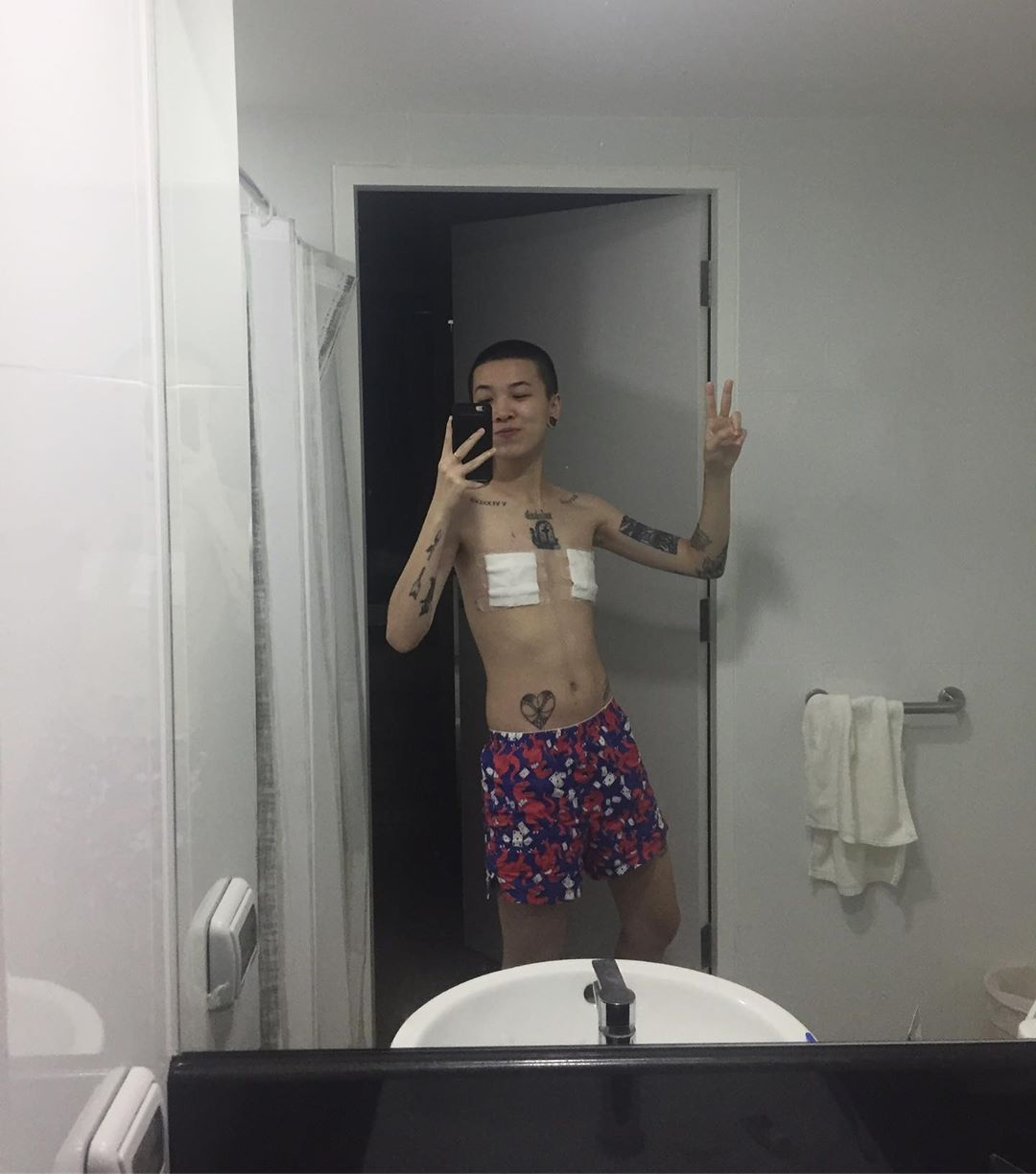 Chris after his nipple reduction surgery

In addition to the top surgery, Chris also had a nipple reduction surgery. Since it would be performed by a different surgeon, Dr. Kamol gave him the option to come back for surgery on a different trip or have it done a week after. Chris chose the latter, so he stayed in Thailand for 1 week.

“I had Periareolar [surgery], so the incision is around the areola. They cut a doughnut shape around my nipple and used that space to take out the tissue underneath. The nipple stalk is left intact, so the nipple sensation is supposed to be there. I’m hoping it comes back, because I don’t feel anything,” Chris laughs after explaining the procedure.

For 6 weeks, Chris had to wear a compression vest. It’s a snug garment that helps to minimise scars, prevent fluid build-up and aids the skin in adhering to the chest wall. After wearing it for a month, however, he decided to take the vest off. 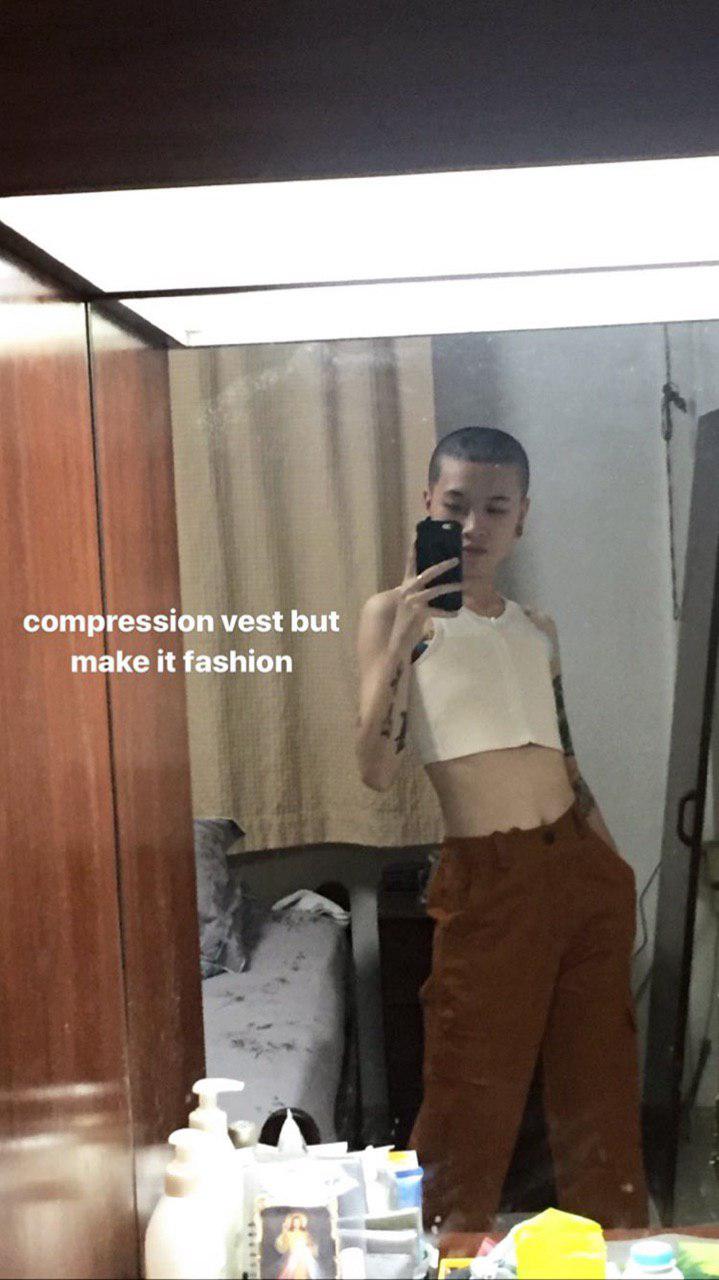 “I still wear it at night when I go to sleep for protection. When I first [wore] the compression vest, it took me 5 hours to fall asleep. If I want to use my phone for a prolonged period of time, my whole arm will go numb. There’s no blood circulation, but it’s worth it,” he says with a smile. 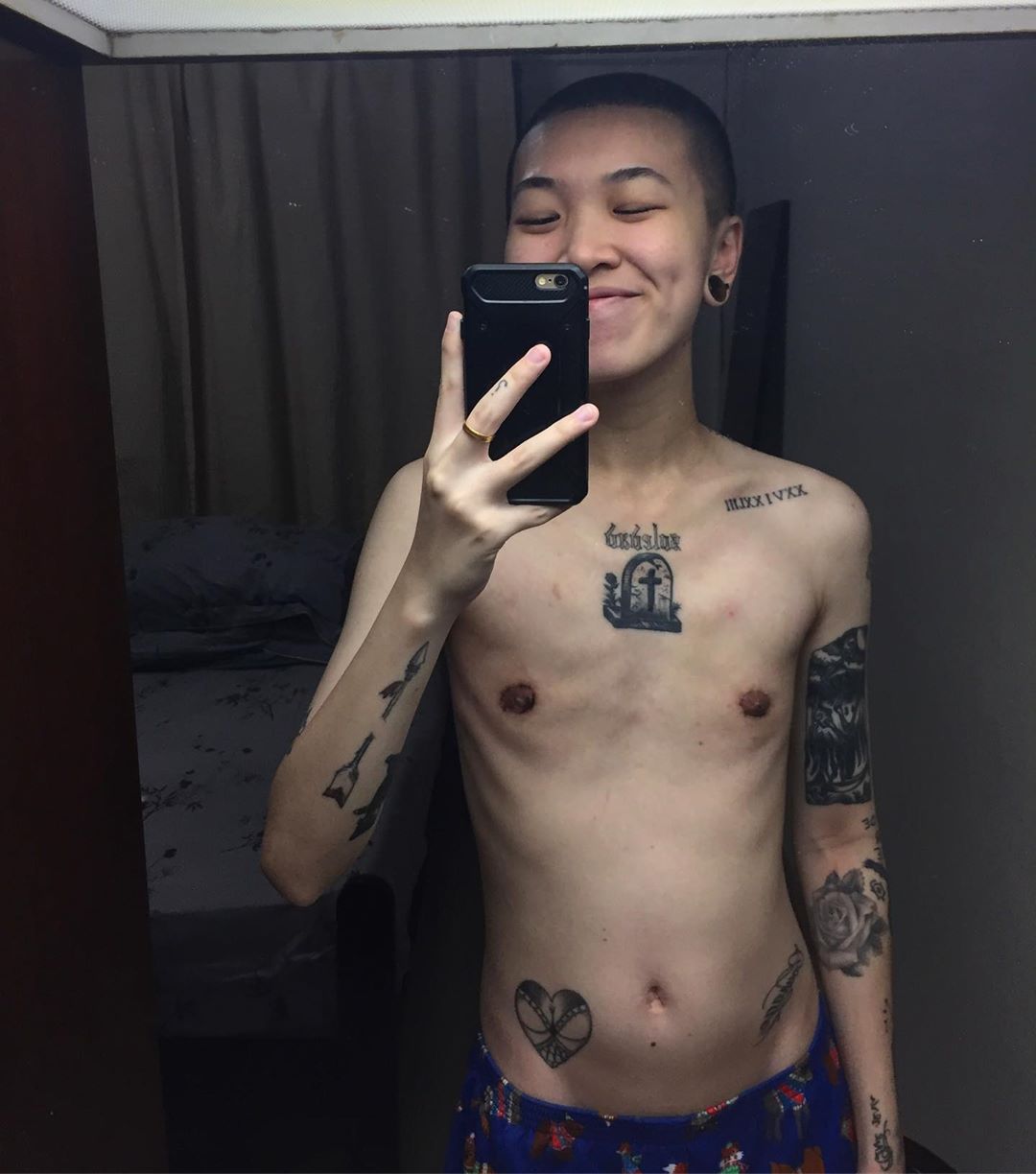 Chris 3 weeks after his top surgery

It could take anywhere between 6 weeks to 6 months after the surgery for patients to regain full use of their body. After 6 weeks, Chris’ chest didn’t feel as constricted as it did a month after the surgery, so he is able to lift both his arms above his head. The scabs and sutures have mostly healed and fallen off too.

“I don’t think I’ve gone this long feeling present in my own body,” Chris shares. “I have, more times in the last month than in the last year, looked at myself and liked what I saw.”

For those who are struggling with body dysphoria

As someone who still struggles with body dysphoria, Chris says, “Don’t force yourself to be in a box. It’s fine to have a list of things that you want to be, but make sure it’s because it would make you more comfortable and happy, instead of changing how people perceive you. There’s no right way to be trans.”

“This is gonna sound so Tumblr but, ‘People who mind don’t matter, people who matter don’t mind’.”

He adds, “It also helps that I work in such an accepting, inclusive place. It makes me feel so much better. I don’t feel like I have to hide anything.” Chris is referring to his day job at The Moon, a local bookstore with a strong focus on female writers and writers of colour.

Chris looks up to trans and gender non-conforming individuals too, such as Alok Vaid-Menon, Chella Man and Theo Germaine. “[If] they can turn down gender stereotypes and be happy, why can’t we?” he muses.

Advice for those considering a top surgery

Before you start looking for a surgeon, Chris suggests doing some research on your chest size as well as the top surgery procedures you’re eligible for.

From there, Chris turned to Google and Facebook groups for relevant information. He is currently following a Facebook group called Top Surgery Support (removal/reduction), which has helped him in his journey.

“You can get a wide variation of results depending on which surgeon you want. You can search the surgeon’s name in the group and it’ll come up. It’s quite easy and accessible,” Chris assures.

With limited resources in Singapore, Chris knows how difficult and confusing it can be for trans youth to begin transitioning. We hope his story sheds light on top surgery procedures as well as the transgender community in Singapore.

being lgbtqa in singapore, female to male, top surgery, transgender