Being Non-Binary In Singapore

In the first part of Chris Hong’s story, we shared his top surgery experience. Here, Chris elaborates on being non-binary in Singapore and why he doesn’t identify as male or female.

Learning about the term ‘non-binary’ 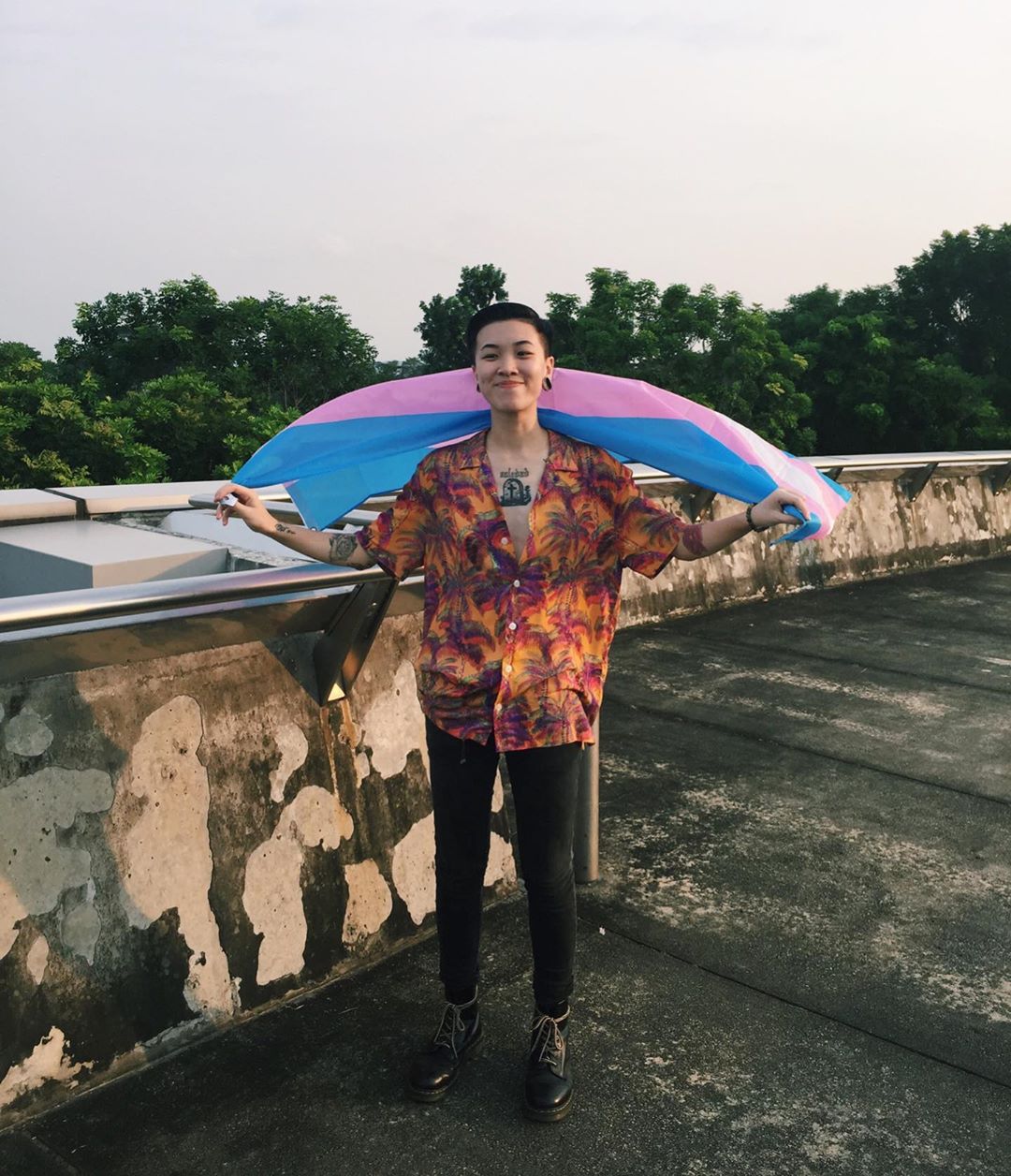 When Chris came out as non-binary in 2019

Up until last year, Chris wasn’t aware of the term ‘non-binary’. He learned about the term through his best friend’s ex-partner, the first non-binary person he had met.

Simply put, ‘non-binary’ is an umbrella term for other identities that fall outside the gender binary of male and female. Some non-binary people use the pronouns ‘they/them’, while others may prefer ‘he’ or ‘she’.

In Chris’ case, he is a transgender individual who doesn’t identify with his biological sex, which is female. Since Chris also identifies as non-binary, his pronouns are ‘he/him’ and ‘they/them’.

“It’s so much easier to not be bound [by the gender binary]. [Identifying as non-binary] removed so much of my [body] dysphoria because I didn’t have to be in that box anymore. ‘They/them’ just clicked for me,” he lets on.

The term is also increasingly being used in mainstream media. In 2019, award-winning singer Sam Smith came out as non-binary. “After a lifetime of being at war with my gender, I’ve decided to embrace myself for who I am, inside and out,” Sam said in an Instagram post.

Other celebrities who identify as non-binary include Queer Eye’s Jonathan Van Ness and Pose’s Indya Moore. “More people are coming out as ‘they/them’ because it’s very restrictive to be ‘he/him’ and ‘she/her’. I think people feel more comfortable going by ‘they/them’ now that there’s more awareness around the pronoun,” Chris shares.

Why he doesn’t want certain aspects of transition

In 2015, Chris realised he was transgender and wanted to start transitioning. “I thought you could only be a girl or boy, so obviously I wanted to be a boy. I wanted to be completely cis and ‘passing’,” he recalls.

In the context of gender, ‘passing’ refers to someone who is perceived as the gender they wish to present as, either male or female. “‘Passing’ is a horrible concept [created] to put trans people in a box,” Chris says with abhorrence. 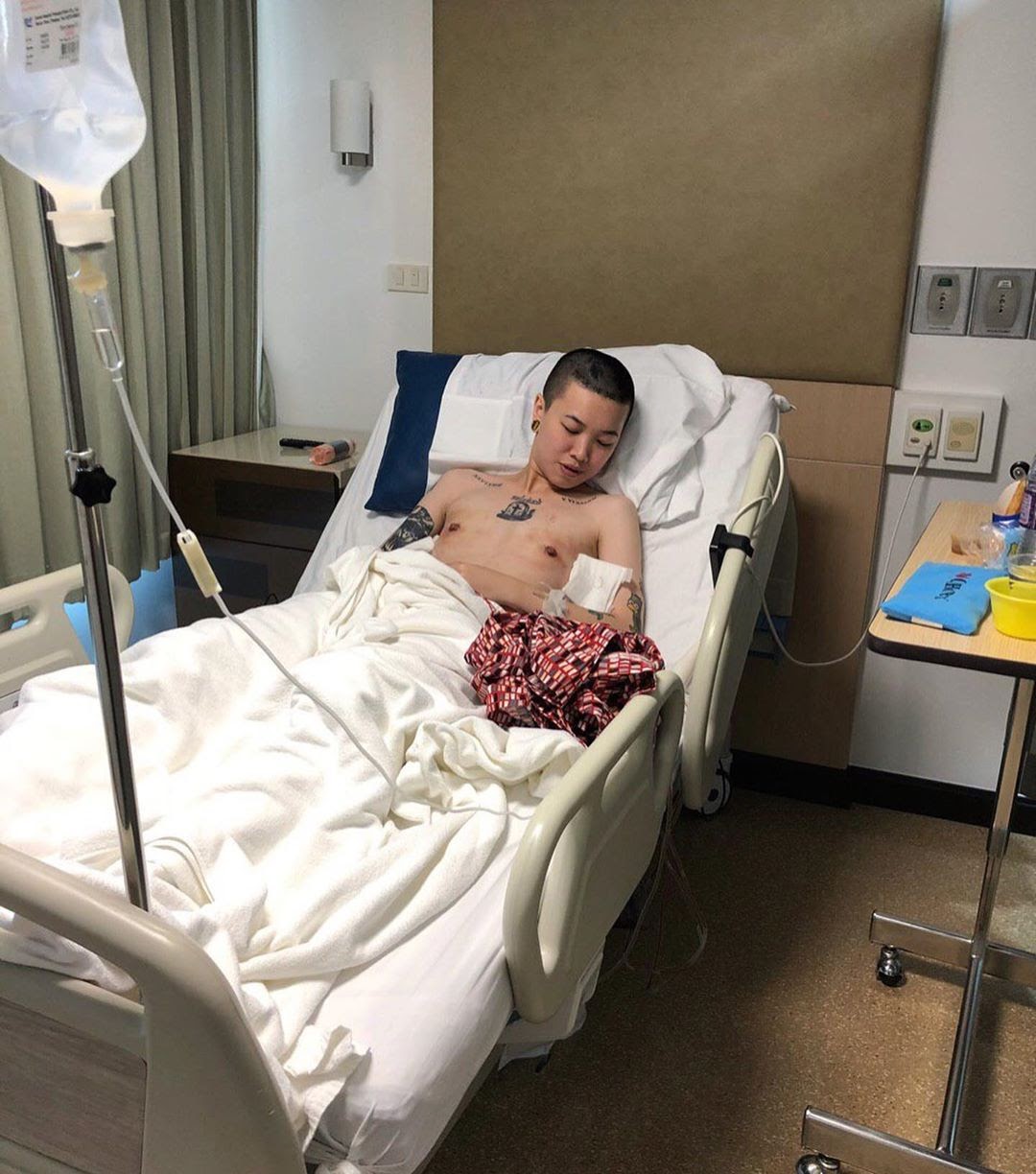 Removing the bandages after his top surgery for the first time

“My top surgery/transition is for the sake of the relationship between me and myself. It has never been to ‘pass’, to be more masculine or to fit into whatever gender binary bullshit there is. It is solely for my relationship with my body, so I feel more present, for my own peace of mind,” Chris clarified in an Instagram caption.

This is why Chris has stopped considering phalloplasty, a surgical procedure to construct a penis. Apart from the disappointing results he had seen online and its $100,000 price tag, he was also deterred by the use of a phalloplasty penis.

“They take skin grafts from your thighs, so the sensation you would get from a phalloplasty penis would be the same if someone licked your thigh,” Chris laughs. “I know these wants are very superficial and sexual in nature, but these are the things cis people take for granted.”

Dating as a trans, non-binary individual

When it comes to sexual orientation, Chris identifies as queer. It’s a multi-faceted term that bears different meanings for different people and can be used in various ways. In Chris’ case, it means he’s attracted to people of many genders.

“Sometimes I tell folks I’m bisexual or pansexual since those are more commonly used and understood,” Chris explains. “Truth is, I really don’t care what comes attached to someone’s personality.”

Plenty of millennials are already facing dating app fatigue, but for Chris, meeting new people is an emotionally exhausting task. “Apps like Tinder are so binary. Even if the app is inclusive, the people on it are not. A lot of [them] seem to think it’s okay to ask trans folk invasive or ignorant questions,” he says.

“So you have a vagina?”, “You crossdress?”, “You’re going to make a dick?” and “So you’re a girl lah” are just a few examples of said questions that Chris receives regularly. Because of this, he felt the need to state disclaimers on his dating bios. 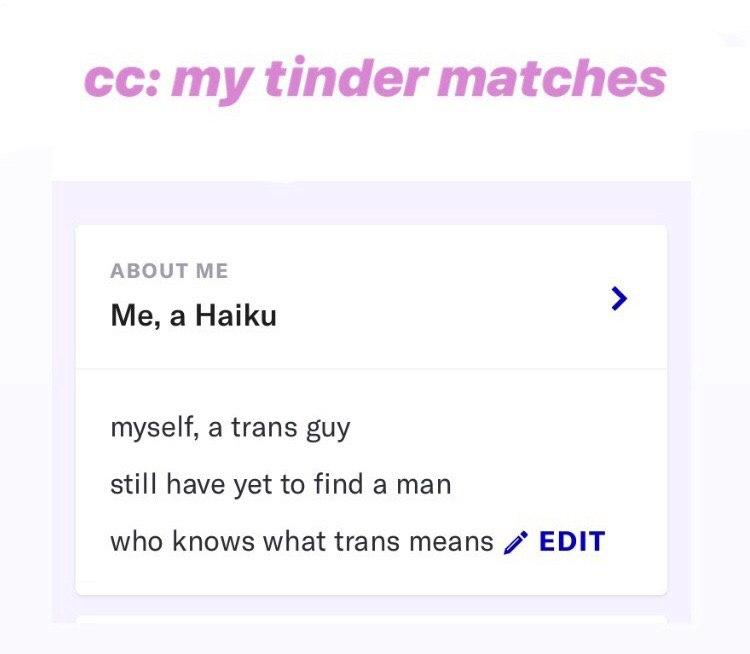 As his ex-partner was a transphobic individual, he wanted to make his boundaries very clear in his Tinder bio. Sometimes, he states, “If you’re not trans aware, just swipe left.” He has since rephrased it, and at one point, even wrote a haiku about it.

“Every time I put bios like that, I get very few matches because I sound very aggressive. I sound very intense,” Chris says. “Now, I’m just chilling out about it. The minute I get a stupid question, I unmatch.”

How to approach & address non-binary people 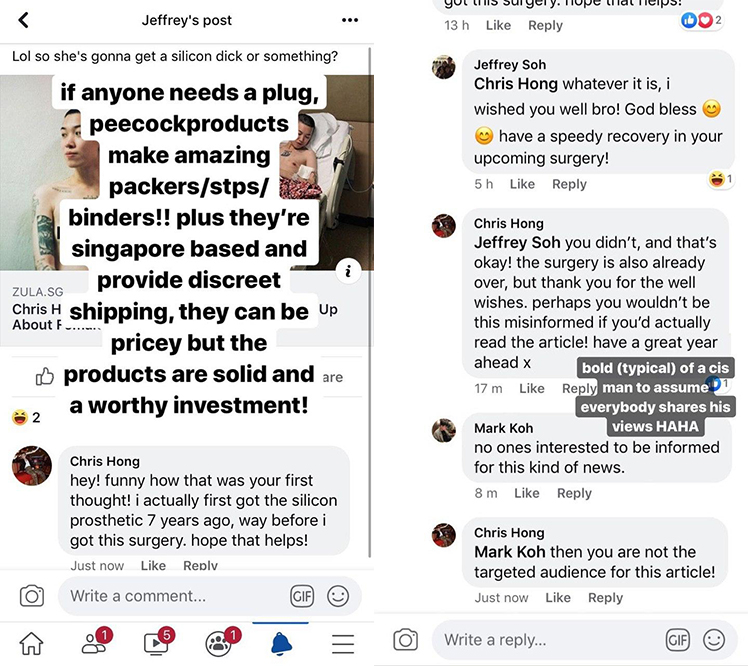 Misinformed of Chris’ gender identity and story, several transphobic comments streamed in when we shared his top surgery experience on Facebook.

Chris tries to address spiteful remarks from cis men with a sense of humour, but he also stresses the importance of understanding boundaries. “No one asked for your opinion. Know what space you’re welcome in, and know when to step out,” he quips.

There are people who dismiss trans identities too, claiming that they are “not backed by science”. “I’ve found [that] the fastest way to shut that argument down is to use actual science. Facts don’t care about your feelings. Our identities are as is,” Chris shares.

It’s not difficult to be respectful and supportive of non-binary people. A good place to start is by thinking of how you can phrase your comments in a sensitive way. Chris advises, “Google is free! Try to let yourself unlearn and relearn. It is okay to be wrong sometimes.”

“Thoughtfulness goes a long way. Ask for someone’s pronouns instead of assuming, or introduce yourself with your pronouns so they can respond with theirs,” Chris suggests.

“Mistakes happen,” he affirms. “Most [people] are happy if you don’t stop the conversation to explain [yourself] or make a deal out of it. Just apologise, correct yourself and move on.”

Chris Hong On Being Trans & Non-Binary In Singapore

As a minority within the already marginalised LGBTQ+ circle, Chris has to constantly tolerate ignorance and prejudice.

If you notice a stranger misgendering your trans or non-binary friend, correct them politely. Trans and non-binary people may not feel safe or comfortable explaining themselves, but you can lend a hand by speaking up for them.