In 2009, the first gay dating app, Grindr was introduced. Three years later, Tinder was launched. Since then, there has been an explosion of dating apps, for straight and LGBTQ+ people alike. We spoke to 5 members of the LGBTQ+ community in Singapore about their personal experiences with dating apps, and the effects these apps have had in the community.

1. “Dating apps have helped a lot of closeted members of the LGBTQ+ community find love” 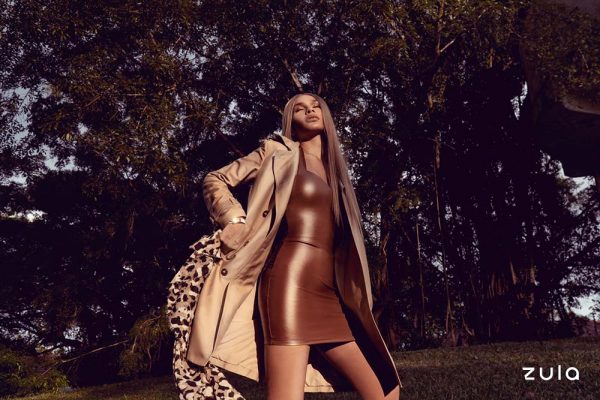 “As a transgender woman, it gets tricky when you are on dating apps. I’ve met some transphobic men, which can really affect your experience using the app.

Back in the day, I was a fan of OkCupid and Grindr. On OkCupid, you fill up a bio and they get to know more about you. The first point of contact is not all about your looks and your gender identity. On Grindr, even though it is used mostly by gay men, there is a space for transgender people. Many men who want to get to know trans women use that app to find them and start a conversation.

When you meet someone through mutual connections, there is a higher chance of having common interests and lifestyle backgrounds, which is important. When you meet someone through a dating app, who they choose to portray via the app might not be who they are authentically. You might only find out a lot later when the ‘mask’ that was used to impress you to get your attention falls off.”

“In general, I feel safe while using dating apps because we live in Singapore. The police are just a dial away should I get into a compromising situation. The minus point is the possible deceptive nature of online dating. There are many partnered people who use the app with false names to get to know more people outside their relationship, under the pretense that they are also single.

I dated a guy whom I met through a dating app, on and off for about 8 months. When we finally split, I found out through a friend who was working in the same office as him that he had lied about his relationship status, name and age. It was an eye-opening experience for me.

Other than that, it is generally a positive platform for people who are too busy, or too anxious to go out and meet people at public spaces or through gatherings.”

“I think dating apps have helped a lot of closeted members of the LGBTQ+ community find love and romance. You can meet and chat with like-minded individuals through that platform whilst still maintaining your cover.”

“It is important to look out for red flags before meeting someone for the first time, and taking your time prior to the first meeting is key to doing this. Meeting in a public space is also advisable to avoid any compromising encounters.”
—Andrea R

2. “The intentions of many out there are not genuine”

“I’ve been with my partner for 6 years. We met through Tinder, but we had mutual friends as well.

Even though I met my partner through Tinder, I think there’s something more romantic about meeting someone through ‘natural’ ways like in a bookstore or through a friend. Dating apps are more practical since the agenda is clearly stated from the get-go.

Personally, I feel that Singaporeans need dating apps to socialise because we’re not as forward as foreigners to speak to people in public casually and strike up a conversation. Instead, we prefer to hide our real identities behind a screen first.”

“I think the safety issues lie in the other person being either a catfish or problematic such as being racist, not being able to hold their alcohol, etc.

Meeting complete strangers through apps can pose uncertainty, which isn’t assuring. Having at least a couple of mutual friend relations established will help ease the connection into being more natural.

I’ve been catfished before and other people have also used my photos to catfish others, which left me rather put off with dating apps for a while.”

“There’s plenty of fish in the sea, true. But it’s also rather polluted? The intentions of many out there are not genuine, sometimes only loving the thrill of the chase or simply seeking casual sex.

I think that dating app fatigue can make individuals feel jaded at love. This can possibly cause some to “settle” for flings and hook-ups, thinking that’s all they deserve, which isn’t true.”
—Bry

3. “The first time you download it, you’re always hopeful. As time passes, you start seeing the whole beauty of it fall” 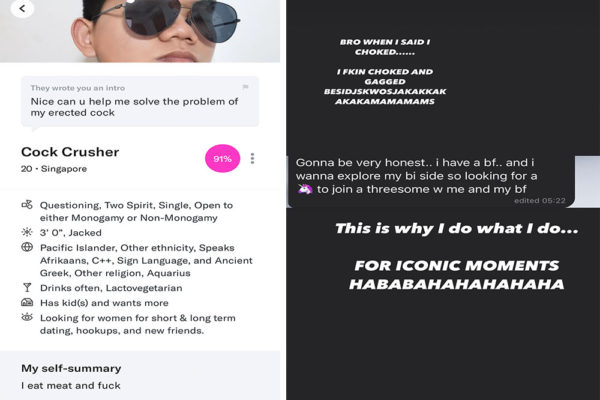 “I’ve used Bumble, Coffee Meets Bagel, Her, OkCupid and Tinder. Tinder and OKCupid’s functions are more direct and the apps look better. Tinder has been a more interesting playground though.

Using dating apps to find potential partners is not ideal as most things online are a facade. You only get to know someone after a multitude of time spent and experiences. It would be great to meet someone through friends or school or just in real life but due to my current circumstances, it’s not possible.”

“There have been unpleasant incidents where people were out of line. And, as I mentioned earlier, people put up a facade that will sadly fall eventually.

A lot of people like to shove their tongues and most just want sex. There are loads of people who want threesomes too.”

“It’s just tiring because of how people are. The first time you download it, you’re always hopeful. As time passes, you start seeing the whole beauty of it fall because of the people you meet. Eventually, you give up and end up not replying anyone, even those you were interested in.”
—Anonymous

4.“Using dating apps to find potential partners is a lot easier, at least for the gay community”

While Tinder, OkCupid and Jack’D serve different purposes (chatting, dating and hooking up respectively), these are the 3 dating apps I find the most promising. Of course, there’s the legendary Grindr for hook-ups. But that platform has now turned sketchy as hell, so it’s a no from me.

I prefer using dating apps to find potential partners because it’s a lot easier, at least for the gay community. In Singapore, no one goes around screaming ‘I’m gay!’ I mean, no one really does that anywhere but you get my point. It’s hard to network and meet other gay people with similar interests, who can vibe with you and are serious about wanting to start a relationship. The fate game just ain’t strong anymore.

On dating apps, however, all the information you need about that person is at your disposal. And, their sexuality is explicitly reflected in their profiles, at least on most apps.”

“I’ve been catfished, scammed, cheated and exploited. The sending of NSFW pics is a norm in the gay community. While I’m not trying to normalise it, the fact is that we do send a lot of such pics. There have been numerous incidents where these pics ended up on the internet, like Tumblr (back when they still allowed NSFW content) and gay Twitter, mine included.

“My ex once shared with me that he learnt from his peers that most gay men don’t desire relationships anymore because there is no end goal for a gay relationship here in Singapore. And, getting married and living abroad is an easy thing to say but is impossible for most of us.

As a result, they resort to just satisfying whatever they can, mainly sex.

I personally find that, with the convenience of networking with people through dating apps, and the surge of its usage, more gay people are engaging in sex. Sex has become a much less taboo topic, even among the straights.”

5. “Dating apps help me understand and explore my interests and preferences in men”

“I prefer Grindr because you can choose to hide your identity, whereas on Tinder your identity has to be public.

I don’t use Tinder anymore for its lack of privacy and safety, hence I’m only left with Grindr. However, most people on Grindr are only seeking hook-ups, not relationships.”

“If you are closeted and choose to show your identity on Grindr, it will circulate outside of the app and into your social life.

I tried Grindr once with my identity shown. People in my school started asking me why I was on Grindr. As a closeted male, it was very frightening.

Also, unbeknownst to him, I found one of my friends on Grindr, even though he had previously expressed that he is straight.”

“After a while, I feel tired that the only types of relationships I can obtain from dating apps are physical relationships, and that it’s practically impossible to find a genuine, emotional connection on these apps.

“I can only speak from the gay perspective. I think dating apps, in general, are pretty great because they help me understand and explore my interests and my preferences in men. On gay dating apps, the men are usually very direct with their preferences and end up easily finding someone that they prefer.

However, the anti-LGBT stigma and stance in Singapore make these apps only used for physical relationships. Hence, I think many men, including myself, were encouraged to pursue a sexual relationship at an early age because we knew that sex was the only way that we could (temporarily) explore our gay side, since we can’t do that through dating.”

“If you are closeted, don’t show your face on gay dating apps under any circumstance.”
—Anonymous

As these interviewees have shared, dating apps have helped more than a few people within the LGBTQ+ community in Singapore find relationships. However, their experiences also highlight the potential risks that come with these dating apps. So before you decide to start swiping, make sure you go into it knowing what you want, whether it is a committed relationship, casual dating or a hook-up, and convey that to the person you’re talking to.