Bling Empire is the latest Netflix reality show to capitalise on the success of Crazy Rich Asians. It’s like Singapore Social’s heavily botoxed sister in haute couture with plenty of diamonds, LED lion dances and shopping trips to Paris, set in the beautiful backdrop of Beverly Hills.

Our beloved island country and crazy-rich Asian hub also gets plenty of attention through the lips of Singaporean billionaire, Kane Lim. Like how Nick Fury assembled the Avengers, Kane unites an all-Asian and Asian-American cast of Beverly Hills millionaires for this wild ride of a show. 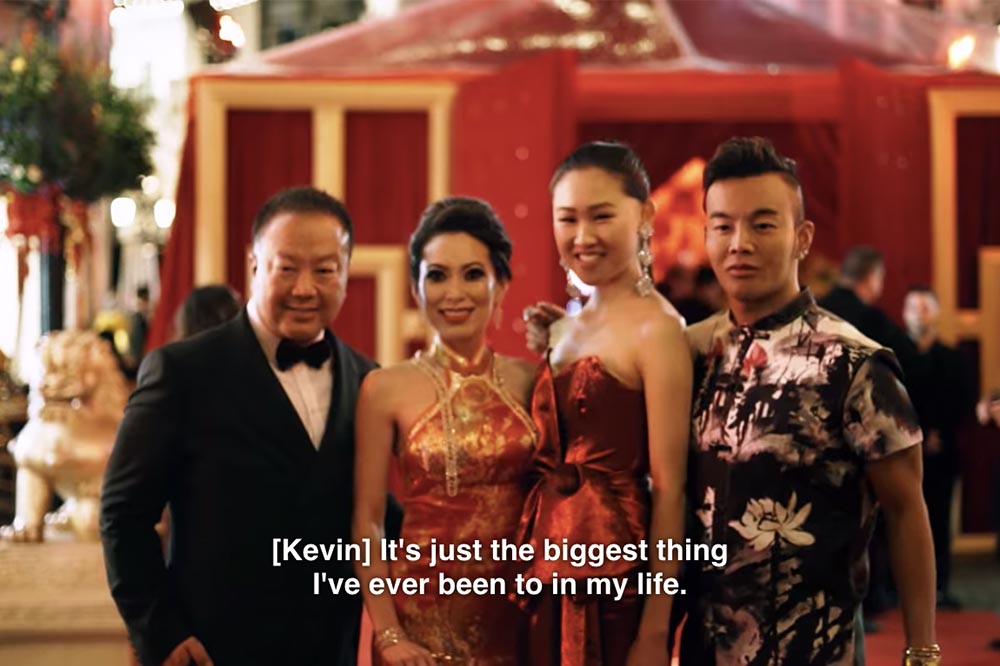 Not your usual bai nian

At the start, I was envious of how fabulous Chinese New Year in Hollywood seems compared to the awkward gatherings I have in Singapore. As the plot progressed, the feelings of jealousy gave way to a realisation that wealth often isn’t what it’s made out to be.

Disclaimer: Of course, I’m well aware that this is a show, and that many of the scenes are probably staged; it’s uncanny that every member of the cast shows up at various parties only to start bickering. But for the sake of this essay, let’s assume this is reality as the genre promises.

You would think that people with sprawling mansions and a heap of designer dresses would spend the bulk of their time giving back to society. Instead, the uber rich just cannot steer away from provoking each other. 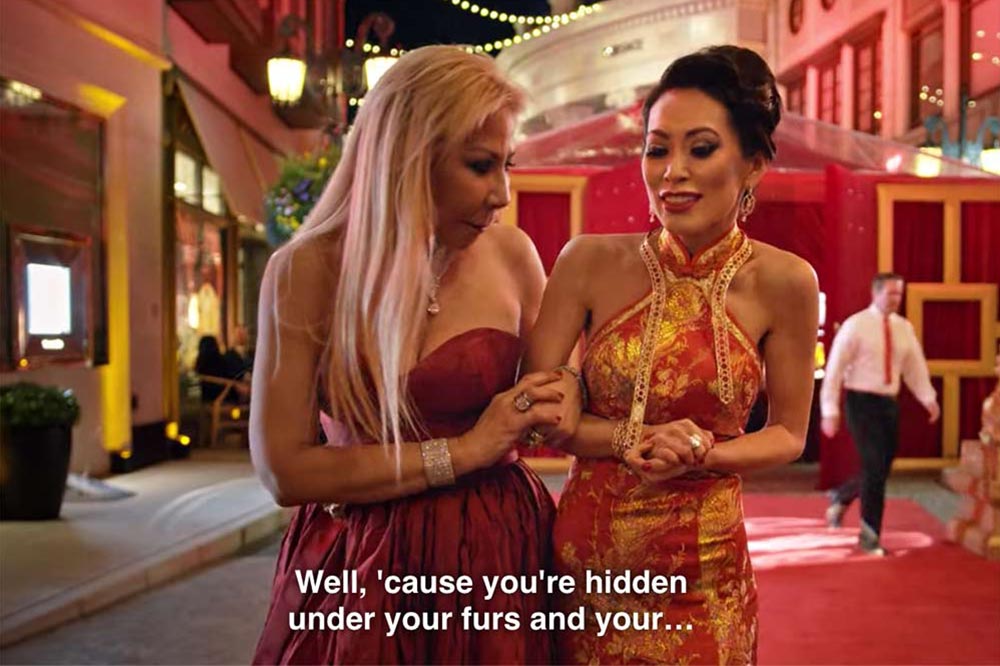 Frenemies for life, Anna and Christine

The show’s 2 “queen bees”, Anna Shay and Christine Chiu, fight over a Louis Vuitton diamond necklace that they both possess. With that much money, you’d think they’d buy a different design and get over it. But instead, the fight is prolonged over the episodes as they continue to show up for each others’ parties and yoga sessions.

Concurrently, Christine and her hubby Dr Chiu struggle over whether they should have another child. Like any traditional Chinese parents, Christine’s in-laws desire more heirs to continue their family line, but Christine is reluctant.

If Christine was middle-class, her health issues would’ve cancelled any notions of having child number 2. However, her wealth provides her with the option of surrogacy. Through Christine’s tearful confessions while wearing ridiculously sized rocks, it becomes evident that money cannot solve all problems, even on Bling Empire.

The rich are not spared from relationship troubles

Anna whisks Kelly, along with Andrew, to Paris for a surprise birthday shopping spree on a whim’s notice. This would make any of us thrilled. Instead, Kelly and Andrew get into a heated argument because she left him at the hotel to sleep in.

Although this doesn’t sound like a big deal, it seems that the larger your net worth, the more shit gets blown out of proportion. 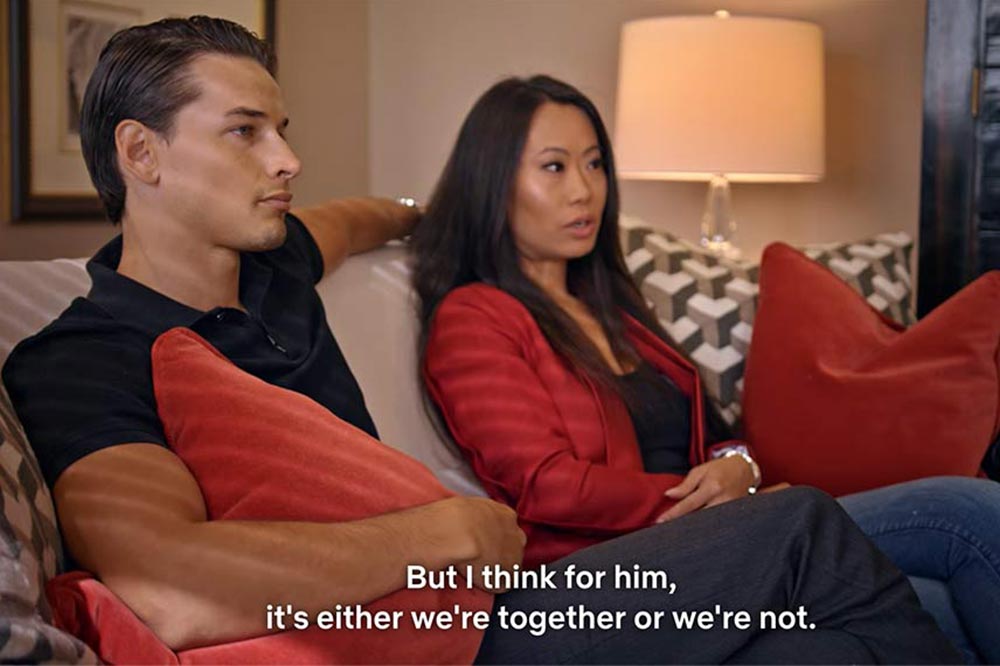 The couple’s issues form the crux of Kelly’s dilemmas and viewers are treated to voyeuristic scenes of them in therapy, which makes the show a worthy watch.

Eventually, Kelly consults a shaman who draws on the powers of her ancestors to heal her. If you’re a millionaire, a licensed therapist isn’t enough to help with your problems. You need some voodoo ritual at a campfire by the beach to get over your First-World problems.

The characters all go on their own spiritual quests, which might be the show’s attempt to infuse the millionaires with some soul. The series opens with Kane meditating to a golden Buddha, and he eventually inspires his model friend Kevin Kreider to meditate in his underwear.

Kevin is the most good-looking of the bunch and portrayed as the poorest, as if to educate us that wealth can afford Botox injections but not good genetics. 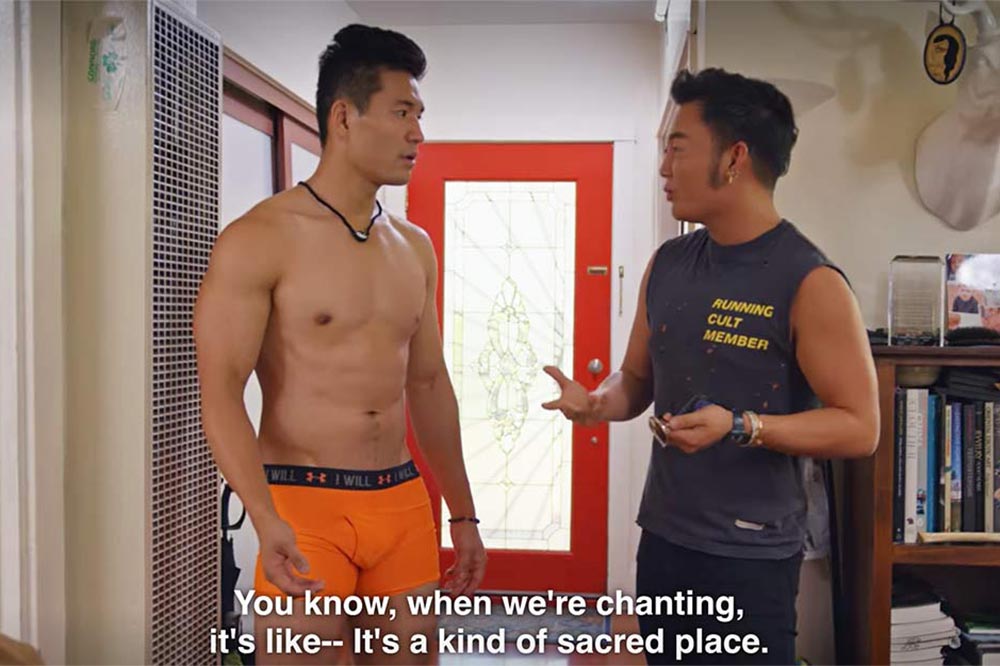 In Hollywood, spirituality has to come packaged in abs as Kevin strips for arbitrary reasons at every possible juncture—a leather-themed party, his birthday, while meditating—the man does not need much convincing to take off his clothes.

Another character, Cherie Chan, takes the cake with her out-of-this-world spiritual quest. 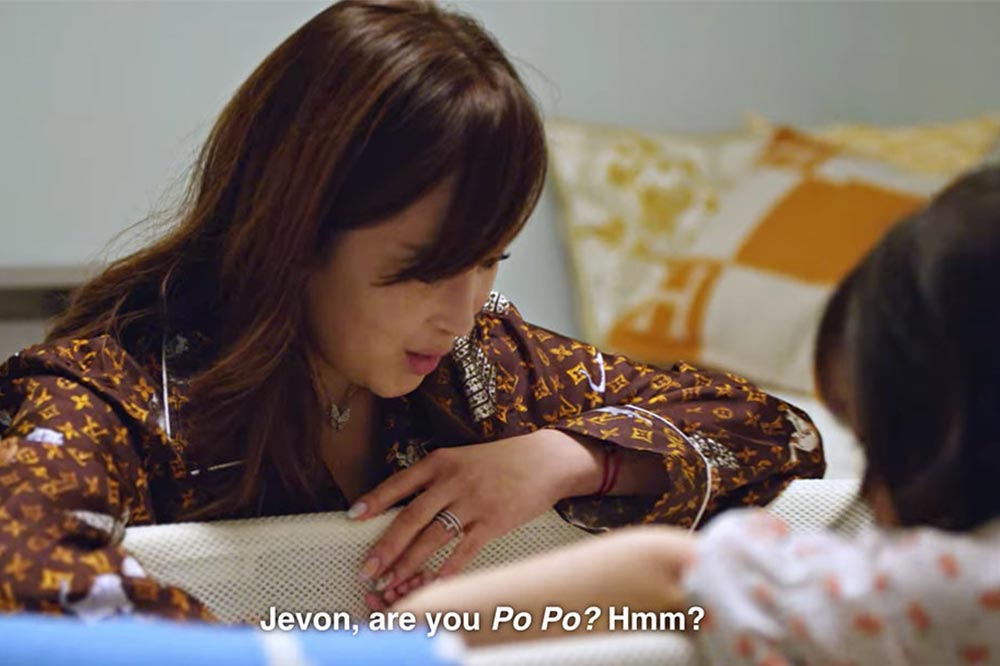 Cherie projects her dead mum onto her newborn

Struggling with grief from her mother’s death, she turns to her BFF Kane for advice. Unsatisfied with Kane’s suggestion to let go of her mum’s belongings in order to move on, Cherie consults Hollywood medium Tyler Henry. Ultimately, she is convinced that her mum has reincarnated into her newborn baby, which makes her wonder if she should stop breastfeeding him.

For us lower-SES folk, we’re forced to accept adverse circumstances like the death of a relative because having Tyler Henry on speed dial isn’t even an option. Most of us are too busy earning our keep to entertain going on a wild goose’s chase to court the dead.

It seems that having a high net worth also increases your propensity to go off the deep end in finding answers to life’s most unsettling questions.

We all have daddy issues

One of the most interesting story arcs portrays Kevin and another character, Kim Lee, looking for their birth parents. Kevin was adopted into a white family as a child, and Kim’s father walked out when she was 8 years old.

Kevin has a touching relationship with his adoptive mother who treats him as her own. Unable to get substantial leads on his birth parents, Kevin consults a hypnotherapist to overcome his childhood misery of feeling abandoned.

More interestingly, Kim hires a private investigator to hunt for her dad in hopes of rekindling some kind of relationship. What the PI says really strikes a chord, when Kim and Kevin ask what would be the best outcome of the investigation.

“That he’s dead,” the investigator replies without skipping a beat.

The fact that Kim’s father has not reached out despite knowing where she lives, means he probably doesn’t want any type of connection with her. In this sense, whatever hopes she has of who he might be or what he might want would only be a disappointment.

If he’s dead, at least Kim will be able to find some closure and move on; as Jesus says, “Let the dead bury the dead.” In the season finale, Kane and Kevin discover Kim’s biological father passed from kidney failure by following the leads the PI provides. In a tearful conclusion, Kim’s tough exterior shatters as she comes to terms with her father’s death, 2 years too late.

I’m glad she didn’t hire a medium to channel her dead father in order to move on—or maybe Tyler Henry was fully booked then.

Watching the show, it seems that having too many options complicates life beyond what it needs to be. Sure, having loads at your cash at your disposal is great for eating magnificent food and buying pearls. But it doesn’t make life feel any less vulnerable.

Money can afford you Botox, but it cannot prevent ageing or death.

Christine is extremely wealthy, but she is still subjected to her in-laws’ judgement and birthing complications. Despite having the option of surrogacy—a choice only the rich have—she still chooses not to have another child, to the disappointment of her in-laws.

Money cannot give you values or help you to make tough decisions.

Our modern life affords us plenty of overlooked luxuries—clean water, electricity, air-conditioning in hot weather and a sense of safety through a competent government.

Kane’s love for Singapore is summarised in being able to walk about in his diamonds without the fear of getting robbed. While not all of us will have expensive jewellery to wear, we still enjoy the same luxury as him, of feeling safe in the Lion City.

As the characters of Bling Empire prove, having more sometimes leads to more problems. Having less narrows your options, which seems like a bad thing in most cases. But at least it saves you from the dilemma of choosing between a myriad of choices.

If we look at the course of history, we are already living in a bling empire with dazzling skyscrapers and the ability to hop onto a plane, across the globe. Yet despite technological advancements, we’re unable to stall death or disease. But maybe this is how it’s meant to be.

Money can buy haute couture but only we can afford acceptance.

Whether you’re high or low-SES, it really doesn’t matter as long as you learn to look beyond the name brands and accept life for what it is.