It’s Okay To Not Be Okay

Warning: It’s Okay to Not Be Okay spoilers ahead!

Gone are the days of damsel-in-distress storylines in Korean dramas. Or more specifically, the poor-girl-meets-rich-oppa set-up. These days, it’s all about the alpha females in K-dramas like Itaewon Class and Crash Landing On You. Alpha females are generally characterised by their strong, independent and take-charge personalities, and that’s no doubt who Ko Mun Yeong (Seo Ye Ji) is in the recently concluded It’s Okay to Not Be Okay.

Set in a psychiatric hospital, the K-drama shined a light on mental health. Ko Mun Yeong’s character evolution takes into account her antisocial personality disorder, a mental condition that affects much of the way she interacts with others and how she acts in general.

Over 16 episodes, we see Ko Mun Yeong go from a lonely and entitled outsider to someone who overcomes her traumatic childhood and learns to let others in. Throughout the process, she remains unapologetically herself. Read on to find out how Ko Mun Yeong showed us what an alpha female looks like.

1. Does not let societal expectations affect her relationship 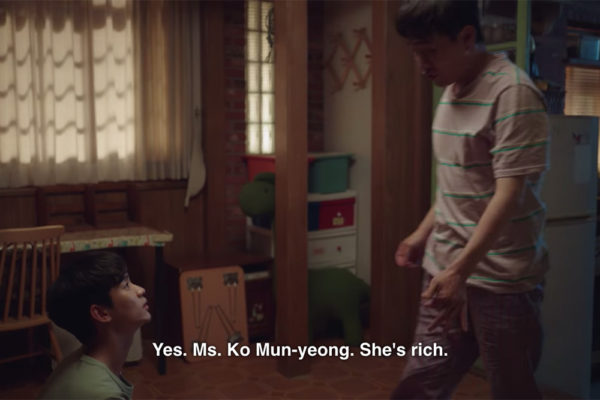 It may be 2020, and we might have a record number of female politicians in Singapore’s 14th Parliament, but the remnants of patriarchy still linger. For one, society still expects men to earn more than the woman in a relationship and be the breadwinner of the family unit.

In It’s Okay to Not Be Okay, Ko Mun Yeong is a famous childrens’ author in South Korea who earns plenty through publishing, and possibly through royalties as well. On the other hand, Moon Gang Tae (Kim Soo Hyun) works as a caregiver and earns just enough to get by.

The fact that Gang Tae commands a significantly lower salary does not deter Mun Yeong from trying to establish a relationship with him. And when they eventually end up dating, her earning more doesn’t ever make her view Gang Tae as inferior or unworthy in any sense. 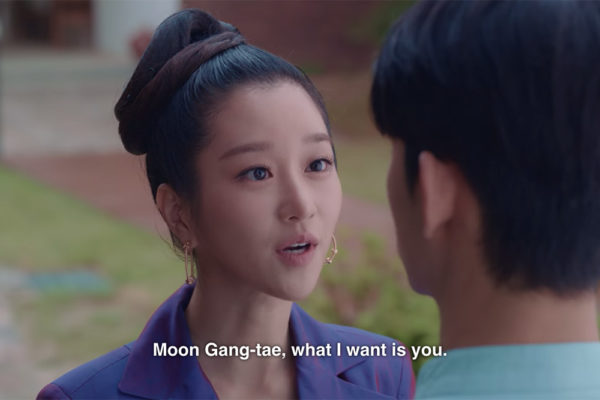 An alpha female is strong, confident and dares to take the lead.

Ko Mun Yeong is straightforward when she makes the first move and confesses her feelings to Moon Gang Tae. Knowing what she wants and being unafraid to vocalise it, especially when the fear of rejection looms over ominously, is an act of bravery in and of itself.

3. Forms her own judgments and sticks to them 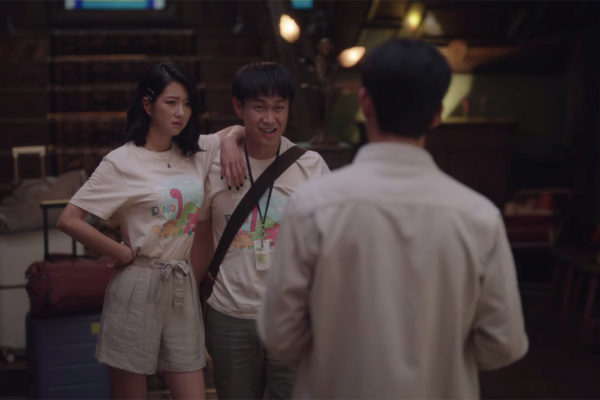 Ko Mun Yeong’s lack of prejudice is one of her best attributes. Meeting Moon Sang Tae, Gang Tae’s older brother who has autism spectrum disorder, for the first time, usually garners a few reactions. People either treat him like a freak, as depicted in a book launch scene, or resort to baby talk. This means simplifying one’s vocabulary, making changes to one’s intonation to make it more dramatic and song-like, and speaking slowly.

However, Mun Yeong does none of that. She doesn’t patronise or talk down to Sang Tae. Instead, she treats him just like how she treats everyone else, showing that she doesn’t assume Sang Tae has problems understanding what she says. In fact, she is even the one who stands up for him in the book launch scene, putting her own reputation at risk.

It’s also heartwarming to see them as BFFs through a series of petty fights and happy moments over the course of the show.

4. Isn’t ashamed of her opinions 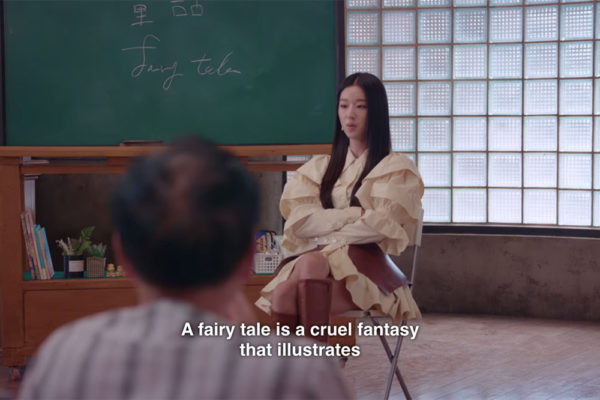 Ko Mun Yeong’s views on life and fairy tales are vastly different from what is considered “normal” by society’s standards. For one, she defines a fairy tale as a “cruel fantasy that illustrates the brutality and violence of this world in a paradoxical manner”. Her slightly disturbing thoughts are also evident in her fairy tale books, one of which tells a story about a young child devouring his mother.

Mun Yeong knows she’s different from others and that her works are highly debatable. Yet, she doesn’t follow the crowd and continues to release books and conduct workshops to advocate her views.

5. Cares deeply about the people she loves 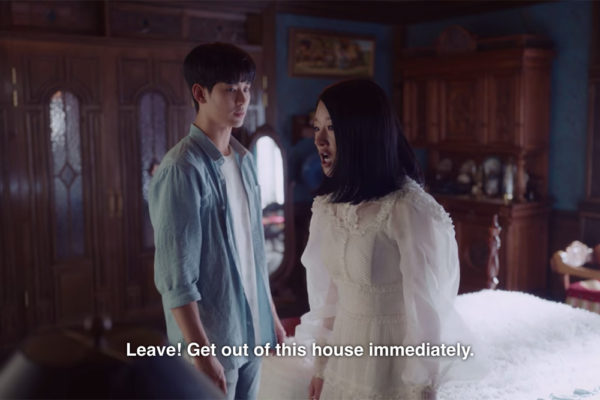 The ice princess is usually unapologetic about most things, like when she offends others with her snarky remarks or when she bails on her boss. However, when Mun Yeong finds out that her mother was behind the murder of Gang Tae’s and Moon Sang Tae’s beloved mother, she can’t forgive herself.

Amidst apologising profusely to the brothers, she also begs them to escape in case her mother returns to make them suffer. She would rather take the brunt of life by herself, rather than cause her loved ones to suffer. 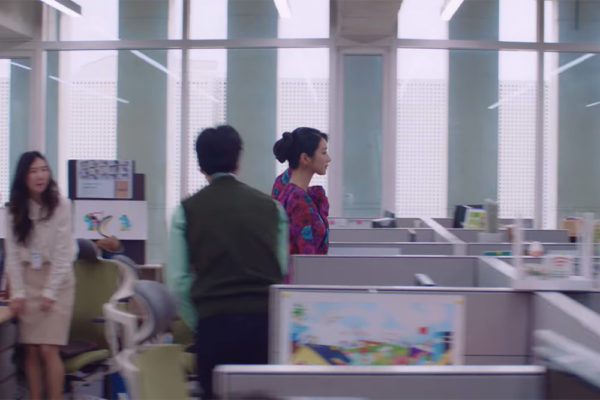 It takes courage to pull off Ko Mun Yeong’s bold fashion choices. Her clothes attract a lot of attention from onlookers but that doesn’t dissuade her from wearing whatever she wants.

And it doesn’t stop at her style. Her confidence emanates with each step she takes, and she effortlessly owns every room she walks into with her imposing presence.

7. Is able to pick herself up and fight her demons head-on 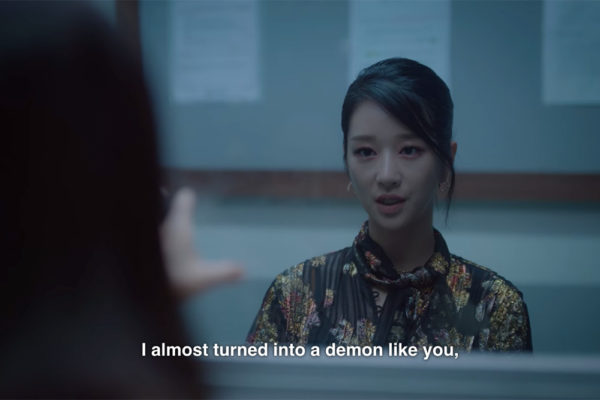 It’s Okay to Not Be Okay is a bildungsroman of sorts, focusing on the characters’ journey of maturing mentally and emotionally. Ko Mun Yeong’s childhood trauma and her fear of becoming like the evil woman her mother is haunt her every day in the form of nightmares.

With the help of her friends, she sees the light and resolves to break free from her mother’s influence. And it’s not all fluff either. As Mun Yeong admits when she says to her mother, “I’ll try my best to erase you from my memory”, it’s a painful process, but one that she knows she needs to go through.

Ko Mun Yeong is by no means perfect. At times, she can be mentally and emotionally unstable, and there are multiple scenes in It’s Okay to Not Be Okay where she makes questionable decisions. But that is only human. With her charisma, style and confidence, we can all learn a lesson or two from Ko Mun Yeong about being an alpha female.

20 Seo Ye Ji Facts Including Studying In Spain, Her Mental Health & Acting In It’s Okay To Not Be Okay

alpha female, it's okay to not be okay, k-drama