After the Song-Song couple’s split, there has been little news about actor Song Joong Ki. If you’re curious to know what he has been up to, including his 2 new shows out on Netflix in February 2021, here are 21 facts about the charismatic captain from Descendants of the Sun.

1. Was a speed skater

He was a short track speed skater for a total of 10 years during his school days. He even won awards at the National Sports Festival and several large sports meets. Unfortunately, the young athlete had to give up his speed skating career after suffering an ankle injury in junior high school. 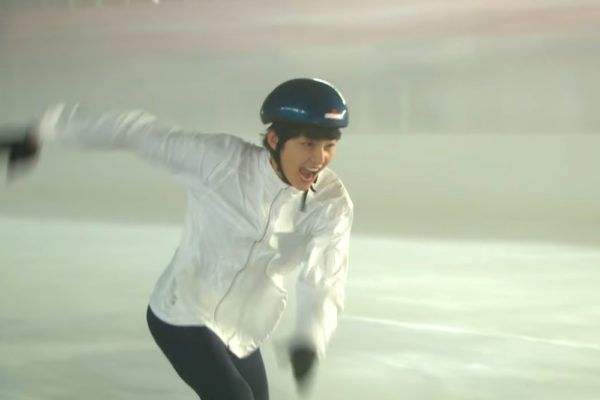 The actor is often referred to as a “pretty boy” or “flower boy”. At Sungkyunkwan University, he was known as the school’s “ulzzang” (“best face” in Korean) and “umchina”, which literally translates to “mum’s friend’s son”. The term is used to describe someone who is perfect in everything, be it looks or abilities.

There’s more to Song Joong Ki than his looks alone. The star was a straight-A student in high school and was the student body president.

He obtained 380 out of 400 points on the national entrance college exam and graduated from Sungkyunkwan University in 2005 with a degree in Business Administration. 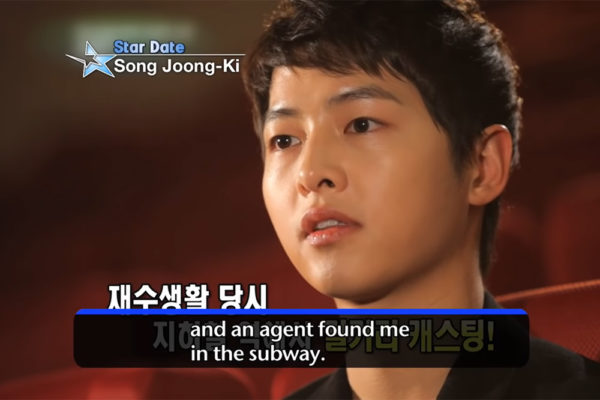 Song Joong Ki could have started his on-screen career much earlier. He was scouted en route to his usual study spot in Seoul while preparing for his college entrance exam, and was offered the opportunity to join the entertainment industry.

However, he rejected the offer as he wasn’t ready and wasn’t interested in acting at that point in time. He eventually started his acting journey during his third year of university when he “felt [he] was sure” about trying out to become an actor. 7. Was a regular member of a variety show 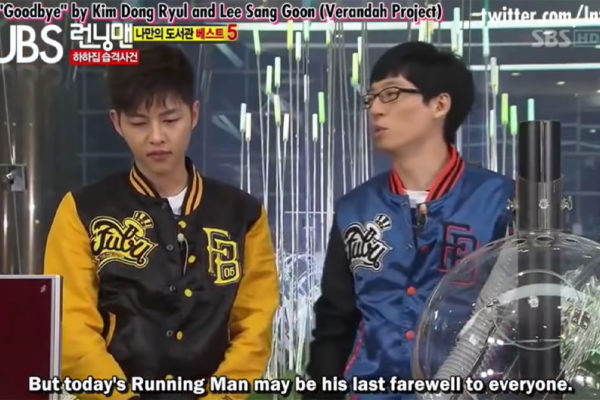 The actor was one of the original cast members of the popular variety show, Running Man. He appeared in episodes 1 to 41 of the show from 2010 to 2011, but left after a year to further his acting career.

In a 2017 interview with Soompi, Running Man’s production director reminisced about the beginnings of the show, saying, “When I was an assistant director, Joong Ki and [Lee] Kwang Soo were the young ones. Joong Ki was very sincere and kind back then, as well.”

8. Rose to fame with A Werewolf Boy The actor’s first lead role was a feral boy who behaves like an untamed beast in the film, A Werewolf Boy (2012). The movie sold over 7 million tickets, and was a huge hit in Korea.

9. Solidified his star status with Descendants of the Sun 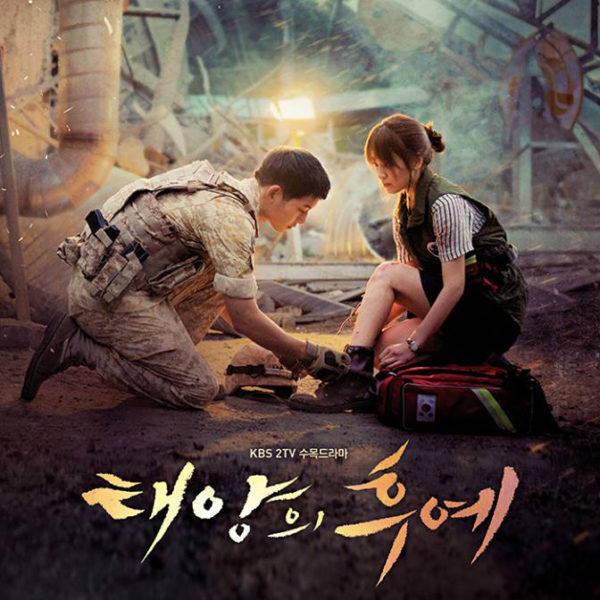 Promotional poster for Descendants of the Sun
Source

Having starred in several successful works, Song Joong Ki was already a household name in Korea. His star status was solidified after playing the dashing Captain Yoo Si Jin in Descendants of the Sun (2016). Ratings in Korea hit 40.5%, and the Korean drama was sold to a total of 32 countries.

Due to his popularity from Descendants of the Sun, the actor even had a special interview segment on the 9pm news, making him the first actor to ever guest star on the news.

10. Married and divorced his co-star 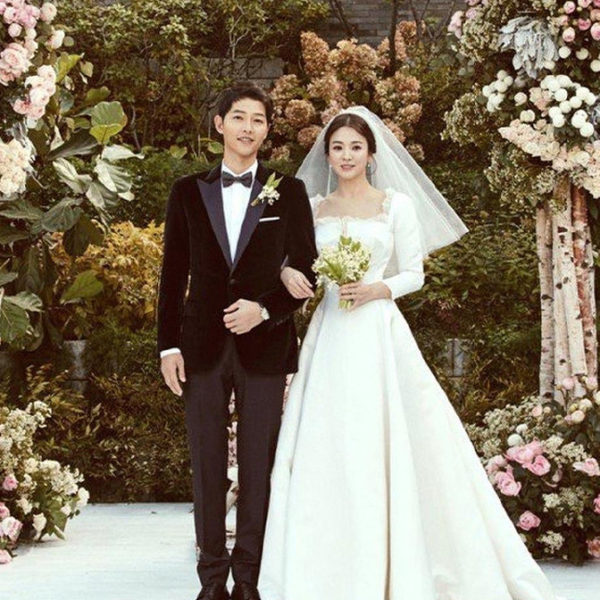 The Song-Song couple on their wedding day
Source

Before Hyun Bin and Son Ye Jin had fans convinced they were a couple IRL due to their chemistry on Crash Landing on You, there was Song Joong Ki and Song Hye Kyo. The pair started dating while filming Descendants of the Sun in mid-2015 and got married on 31 October 2017. When the news was revealed, the response was generally favourable, with fans celebrating the happy occasion.

To the disappointment of many, the couple confirmed their divorce on 22 July 2019 after 20 months of marriage. They stated that the reason behind their divorce was a difference in personalities. Song Joong Ki was also reported to have moved out of their marital home in September 2018, just 11 months after their wedding. 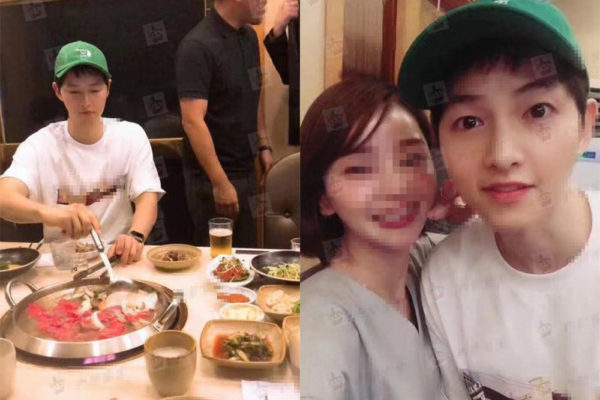 There has been little news with regards to Song Joong Ki’s personal life after his divorce. Most recently, pictures of him at a get-together with his friends surfaced online.

20 Choi Woo Shik Facts Including His BFFs, Acting Career & Being Ostracised In School For Fans Of The Parasite Star 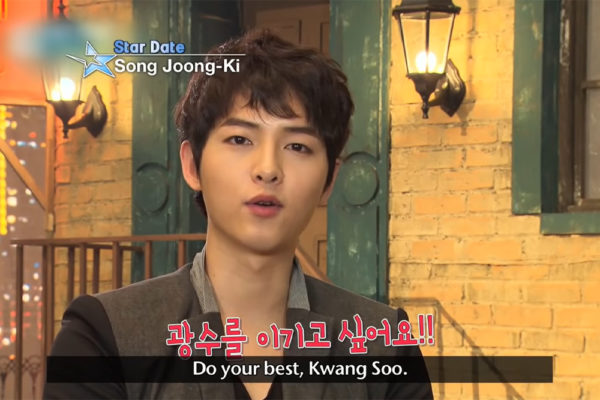 Song Joong Ki and Lee Kwang Soo have been BFFs since their Running Man days. 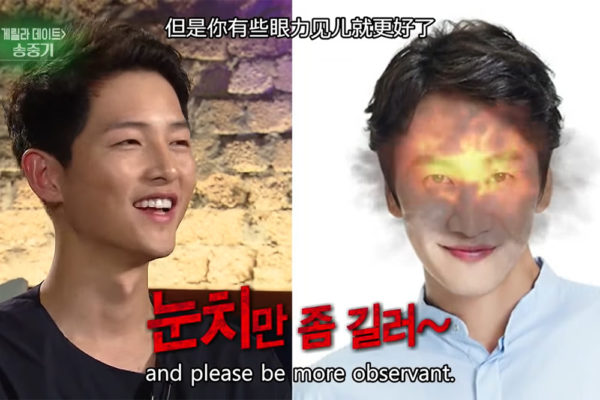 Their dynamics seem to have remained the same over the years, with Song Joong Ki consistently roasting Lee Kwang Soo.

12. Is close to several popular actors 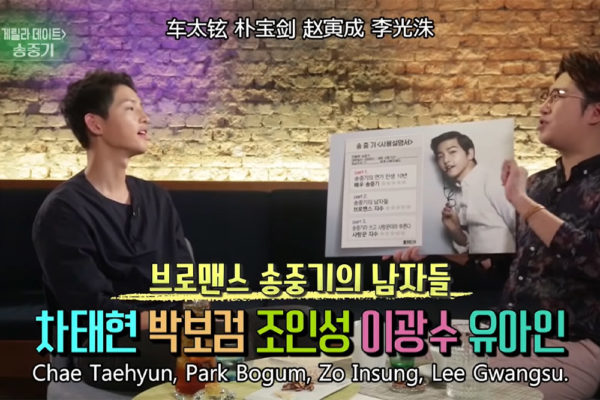 The actor is also good friends with other actors in the Korean entertainment industry, namely, Jo In Sung, Cha Tae Hyun and Park Bo Gum.

13. Carried out his military service near North Korea

Song Joong Ki was a stellar soldier during his time in the military. He was dispatched to the DMZ to carry out several reconnaissance and stakeout operations.

The actor also cited his military service as a significant experience in his life, saying, “I was told I would never get another chance to rub shoulders with ordinary soldiers and live a normal life. I felt I would be able to learn a lot not only as an actor, but also as a young man.”

14. Released a book about skincare The actor is known for his flawless skin and released a book named Beautiful Skin Project in 2010 about skincare for men. The book was a huge success, and was re-released in Japan in 2013. To date, the Korean star has no social media account, and attributes that to the simple fact that he isn’t tech-savvy. In the interview, he honestly admits, “I avoid [social media] because I’m not good at it.”

16. Dreamt of becoming a diplomat 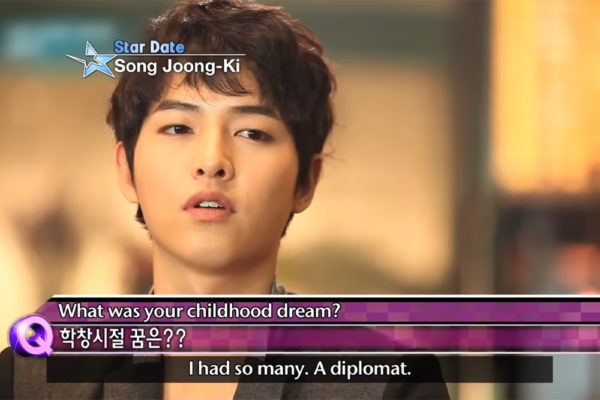 Among his many dreams as a kid, the Descendants of the Sun actor mentioned that he wanted to become a diplomat at one point. Apart from that, he also thought about becoming a staff member in a broadcasting company and an actor, which he achieved.

17. Is in touch with his emotions 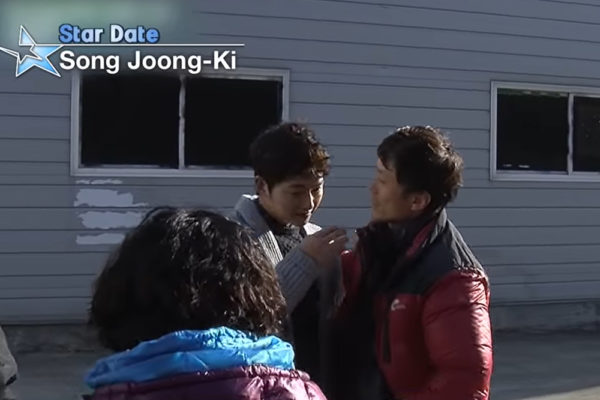 Song Joong Ki has also mentioned that he often cries after finishing a project, even when his co-stars do not. After filming the last scene for A Werewolf Boy (2012) and The Innocent Man (2012), he was spotted crying while hugging the other cast members and staff.

18. Has a new Netflix movie 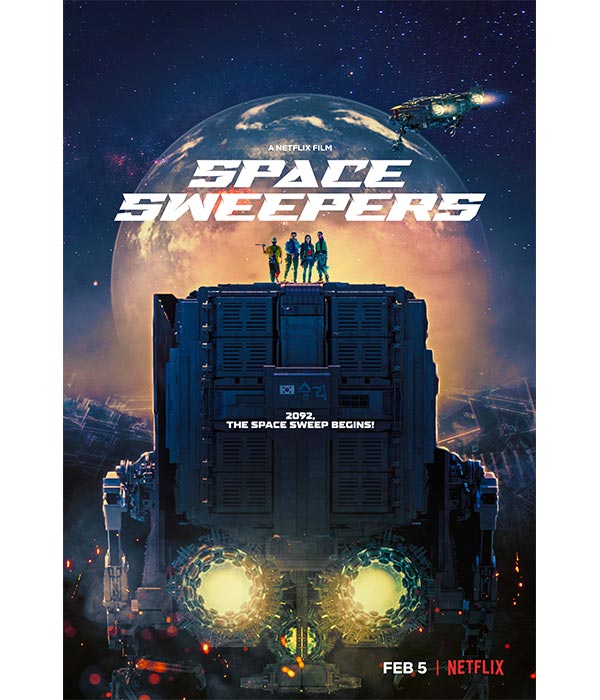 The actor stars in the science-fiction movie Space Sweepers, which is streaming on Netflix from 5 February 2021. The story is set in the year 2092, and Song Joong Ki plays a space pilot.

He had previously worked together with the director, Jo Sung Hee, on the 2012 box office hit, A Werewolf Boy.

19. Is returning to the small screen with Vincenzo 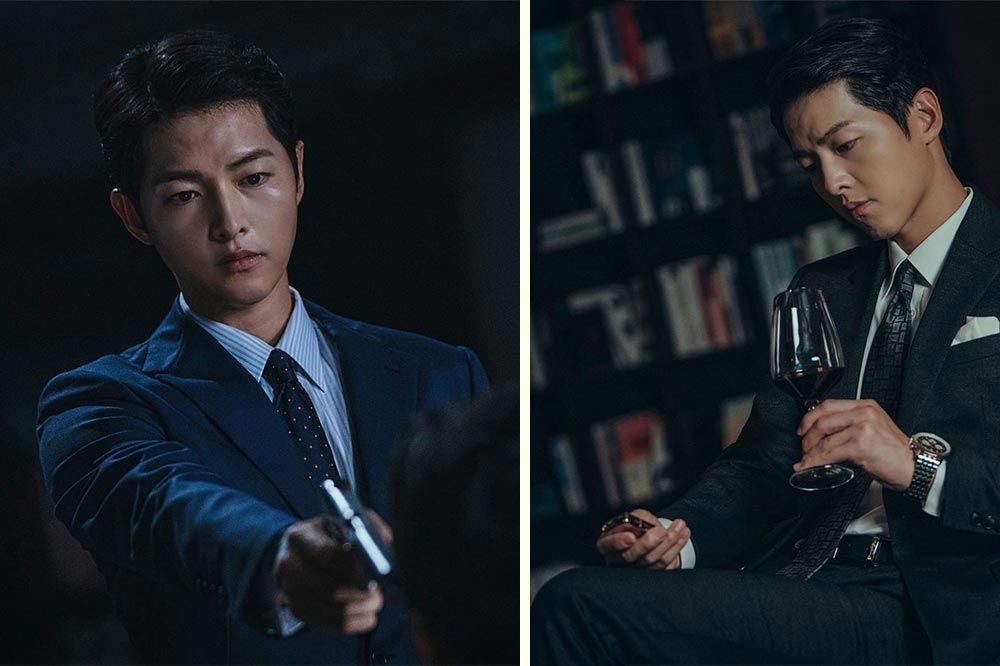 Song Joong Ki fans will be psyched to know that the actor has not one but 2 projects out on Netflix in February. Come 20 February 2021, you can catch him as an Italian mafia member (yes, you read that right) on the tvN drama, Vincenzo. He plays the titular role, alongside Jeon Yeo Bin and 2PM’s Taecyeon.

21. Reprising his role in Arthdal Chronicles 2 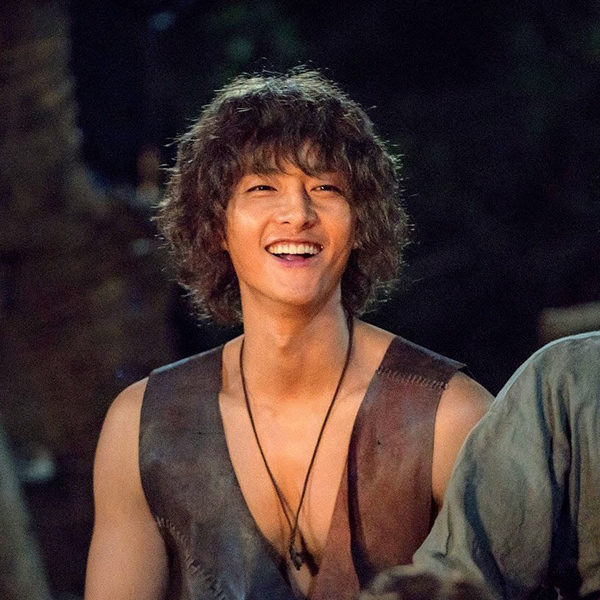 The actor in Arthdal Chronicles (2019)
Source

Despite the first season receiving mixed reviews, Arthdal Chronicles 2 has been confirmed for production. Filming is expected to start in the second half of 2020 and the series is rumoured to hit the small screen around mid to end 2021. 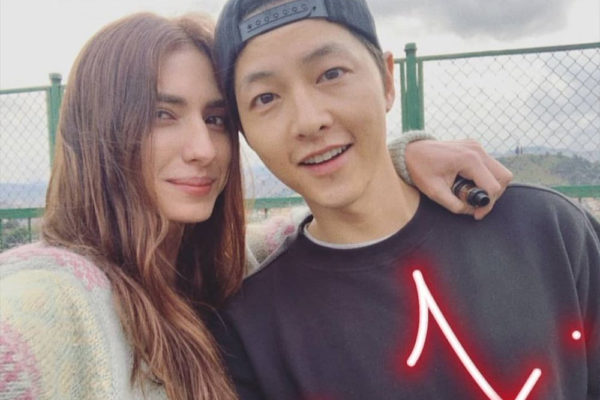 Before the COVID-19 pandemic, Song Joong Ki was working on a film called Bogotá, which tells a story about a young man who moves to Colombia in the 1990s and tries to settle down.

The actor flew back from Bogotá, Colombia to South Korea on 24 March. Filming and release dates for the movie remain postponed indefinitely.

He is also said to be considering a drama called The Season of You and Me, about the life of Korean singer-songwriter Yoo Jae Ha.

Song Joong Ki Pulls Us In With His Humble Charms

If you’ve been anticipating Song Joong Ki’s next step after his high-profile divorce, hold on tight as you wait for all the new movies and drama series coming your way.