As someone who enjoys action-packed anime with likeable characters, Demon Slayer is easily one of my favourite shows of all time. And, it’s not just me. Demon Slayer is one of the most popular anime series globally. Its first movie, Mugen Train, even beat Spirited Away as the highest-grossing film ever in Japan.

The show is about teenager Kamado Tanjiro, who travels across Taishō era Japan to seek revenge on the demon that killed his family. He also bears the burden of finding a cure for his sister, Nezuko, who was turned into a demon during the same tragedy.

A big part of why many people love the series is because it has well-written characters, intense fight scenes and great storylines. While we may not live in early 20th century Japan, a lot of the life lessons the show teaches us can be applied to our own lives. As we, or at least I, anxiously wait for season 2 to arrive later this year, let’s take a look back at the first season of the blockbuster series.

1. Appreciate what you have before it’s gone 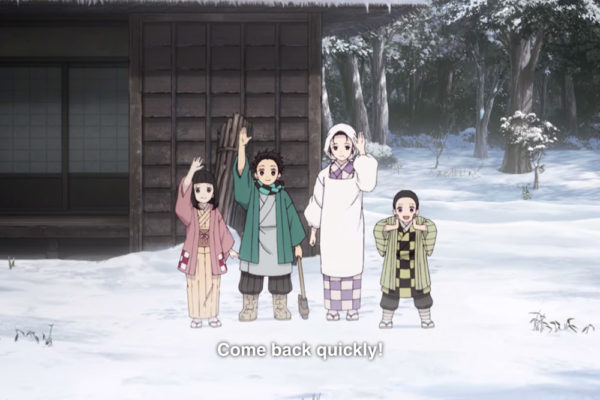 Tanjiro’s family sending him off to town

Tanjiro’s family is poor, but they are happy living together. At the start of episode 1, Tanjiro goes off into town to sell charcoal so his family can be full on New Year’s Day. His family is cheery and full of life as they send him off just like they do on any other day. Nezuko as a human sending Tanjiro off

Sadly, he comes home to see his entire family murdered with his sister, Nezuko, turned into a demon. His whole life is flipped upside down and he constantly questions if they would still be alive had he chosen to stay home that day.

Not everyone in our lives right now will be here forever, so we can’t take anything for granted. If there’s anything Tanjiro’s family can teach us, it’s that we should cherish what we have at every moment because we never know when we’ll lose it.

2. Don’t be afraid to protect what’s important to you

Tanjiro spends the entire first season keeping Nezuko safe and carrying her around in her wooden box. In his fight with Rui, Tanjiro sees the spider demon attacking Nezuko and is enraged. To protect his only surviving family member, Tanjiro uses a new Breathing Style he’s never tried before to break free from Rui’s trap and save his sister.

The last few episodes of season 1 see Tanjiro appear before the Hashira, better known as the “Pillars”, who are the strongest demon slayers in the entire corps. He is placed on “trial” for breaking 2 of the major rules of the corps, those rules being “Kill all demons” and “Do not stop your fellow demon slayers from killing the enemy”. Even as he faces punishment, he still goes against the highest-ranked members to protect his sister from being executed.

Tanjiro sees Nezuko as the most important person in his life and goes to great lengths to defend her from demons and demon slayers alike. If you have people or things in your life that are very important to you, you should always fight for them however you can. Urokodaki assigning his last task to Tanjiro to complete his training

Shortly after his family’s death, Tanjiro runs into Giyuu, the Water Hashira, who saves his life and spares Nezuko. He recommends Tanjiro to his own teacher, Urokodaki, who agrees to train the teenager as a demon slayer.

After a year of stringent training, Urokodaki tells Tanjiro that he has taught him everything he can. His last task is to cut a specific boulder in half using what he has learned. Tanjiro spends over half a year trying to complete this task, but he still can’t do it. He then meets Sabito and Makomo, Urokodaki’s former students, who guide him to use his skills over another 6 months. In the end, he manages to slice the rock in half, proving that his 2 years of training is not for nothing.

In life, sometimes we’ll go through periods where we don’t think we’re going anywhere. But with a little push from the people around us, we’ll get to where we want to be.

Tanjiro is known as one of the nicest anime protagonists because of his outgoing and kind nature. The series starts off with Tanjiro’s entire family being slaughtered by a demon, but even then he still manages to stay kind and have empathy for others.

(There are many examples but for one) 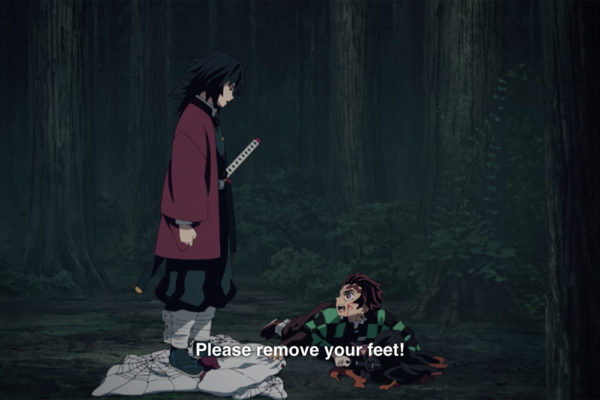 After their fight with Rui, Tanjiro tells his senior, Giyuu, not to step on Rui’s clothing as a sign of respect. He recognises that Rui was once a human too and he deserves to be treated like one, even after death. 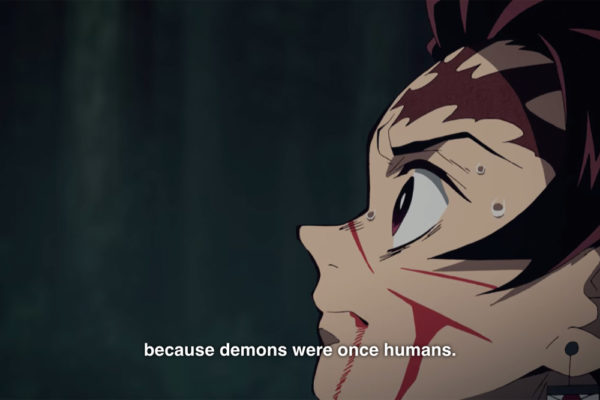 Tanjiro hates demons but understands that they have their own pain to deal with. We never know what someone may be going through, so we should always show kindness whenever we can.

5. Not everything is black and white

Even though the demons are shown to be evil creatures who have no mercy when it comes to killing and eating people, the anime makes it clear that they used to be human themselves. They were once people who lived their own lives and had their own stories to tell. Most of them did not choose to become evil but were pushed or forced to become demons. Even as demons, some of them don’t actually hunt and actually work to help humans. Tanjiro meets Tamayo and Yushiro, demons who run a private medical practice saving human lives. Though they still require human blood to survive, they get their supply from people who donate their blood to them.

Demons are commonly seen as “evil” but not all of them fit into this stereotype. In life , it’s easy to categorise things as being inherently “good” or “bad”. But, there are many exceptions to this. We should always take a step back to see things clearly before making our own assumptions.

6. “If you can only do one thing, hone it to perfection” Zenitsu using his only move against the Brother Spider Demon

Zenitsu is known to be a coward who is too scared to learn how to kill demons, which is why he only manages to learn 1 move, “Thunderclap and Flash”. Discouraged that he cannot learn or do more, his teacher Kuwajima shares with him this quote: “If you can only do one thing, hone it to perfection”. That is exactly what Zenitsu does and he manages to master the skill completely.

Not everyone can be a jack of all trades; sometimes we are good at a certain skill or 2. What’s important is that we give our best effort into what we do. Zenitsu trying to run away from training

Another lesson Zenitsu learns from his time with Kuwajima, the former Thunder Hashira, is that it’s okay to cry and feel down, but he must never give up. During his training period, Zenitsu tries multiple times to run away, but he is always caught in the end. He tells his teacher that he finds demons too terrifying and that he has an immense fear of dying. Zenitsu teaches us that it’s okay to be scared and it’s okay to cry sometimes. But, we still need to pick ourselves up and continue pushing to achieve our goals.

8. You can do much more than you think Zenitsu kills the Tsuzumi mansion demon in his sleep

Zenitsu can only use 1 move, and what’s more, he can only use it in his sleep. He can fight with high-level skills purely on instinct alone when unconscious. He defeats 1 of the demons in the Tsuzumi mansion without knowing it himself and he defeats the Brother Spider Demon all alone. The first time we see his unique fighting technique, he wakes up believing that the little kid he was protecting killed the demon instead.

While it is meant to be a comedic moment, it also teaches us that sometimes we may not be aware of our own potential or skills. We can do greater things if we believe in ourselves and keep pushing the limits of what we can do. Tanjiro in his fight against Kyogai, the drum beating demon in Tsuzumi Mansion

Most anime protagonists survive ridiculous traps and situations simply because they are the main characters.

In Tanjiro’s fight against Kyogai, he realises that he can’t rely on sheer spirit alone to defeat the drum-beating humanoid demon. As he is still recovering from an injury, he has to use his head and come up with a better approach.

It’s good to have spirit. It drives and motivates you to achieve your goals, but you need to match that energy with your actions too. As they say, you can’t be all talk and no action. By combining your head and your heart, it will be easier to get what you want done.

10. If you want to move forward, you have to put the past behind you Tanjiro advising Kazumi to continue living despite his losses

During Tanjiro’s first mission, he meets Kazumi, a young man whose lover has been kidnapped by the Swamp Demons. After a tough battle with the demons, Tanjiro manages to save Kazumi and a young girl, with the help of Nezuko. Unfortunately, the demons reveal that Kazumi’s lover has already been murdered and all that remains of her existence is her hairpin.

Tanjiro, understanding Kazumi’s pain, tells him that he needs to continue living no matter how much loss he has suffered. Although the teenager is speaking to the mourning fiancé, it feels like he is saying it to himself as well.

Tanjiro suffers a great tragedy because of what happens to his family, but he still has to carry on living because he knows they would want him to. In order to move forward in our lives, we should learn to accept our pasts and leave the “what ifs” behind us.

Demon Slayer May Be An Animated Show, But Its Life Lessons Still Apply In Real Life

Life lessons from shows come in many shapes and forms, from K-dramas like Start-up to reality programmes like Bling Empire on Netflix. Anime like Demon Slayer may be animated, but it doesn’t make what you take from it any less valid.

With so many lessons to learn from just the first season alone, it’s exciting to see just what the future seasons hold. All 26 episodes of Demon Slayer are available on Netflix. Since each episode is about 23 minutes long, you can binge-watch the entire series in a single weekend, trust me, I did.

For fans of the show and those who love anime in general, also check out Hakken at Plaza Singapura to pick up plushies of your favourite characters or other anime merchandise.

All images courtesy of Netflix